Hands On With the Apple 9.7 Inch iPad Pro 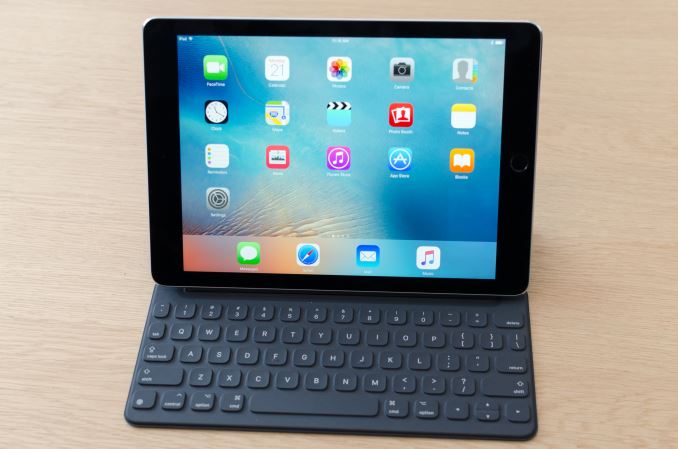 Over the past few months I’ve been able to spend some quality time with the iPad Pro and I’ve found that while the iPad Pro isn’t quite a computer replacement in the sense that you should toss your laptop out, it is the first tablet that can actually justify itself relative to a phablet. With the 9.7” iPad Pro, Apple has been able to take the elements of the iPad Pro 12.9” that differentiated it from Android tablets and previous iterations of the iPad, and fit it in a smaller form factor.

The main points of differentiation that make this device more than an iPad Air 3 include the Apple Pencil, Smart Keyboard, and speakers. The Apple Pencil behaves identically relative to the larger device, but the smaller display size makes it feel more cramped. Other than this, the feel of the tip on the glass is identical, as is the pressure sensitivity, tilt sensitivity, and latency. 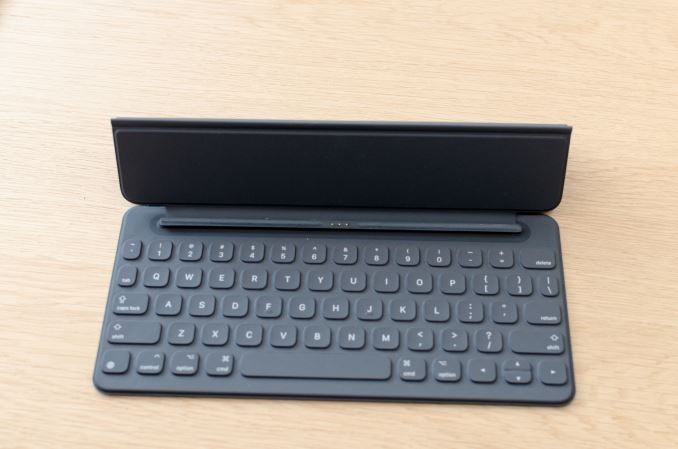 The Smart Keyboard for this version of the iPad Pro is significantly smaller than the version for the 13” iPad Pro. Right away it felt like it was a lot less comfortable to type on this iteration of the iPad Pro as a result as I couldn’t just rely on sheer muscle memory to place my fingers in the right place every time. However with some practice I was able to keep a typing pace that was pretty much identical, although it was relatively easy to make mistakes relative to a laptop keyboard because the keys are smaller so there’s less tolerance for errors in finger placement. With practice, like a smartphone keyboard, I’m sure it’ll be possible to type as quickly as you would on a laptop but I wasn’t able to reach that level of practice over the course of the two or so minutes I could spend with the keyboard. 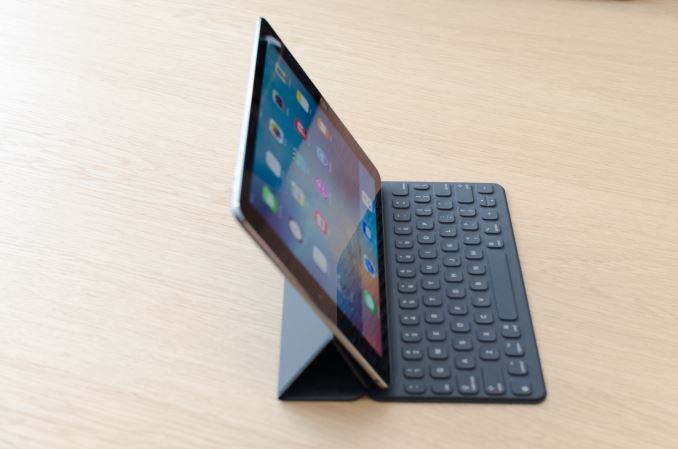 Other than the size issue, everything else feels basically identical to the larger iteration of the Smart Keyboard. Those that love mechanical keyboards for their travel and tactile feedback will probably be disappointed by the feel, but I tend to bottom out keys no matter what keyboard I’m typing on so to me the relatively shallow travel of the keys was not a problem when it came to typing at a respectable rate. 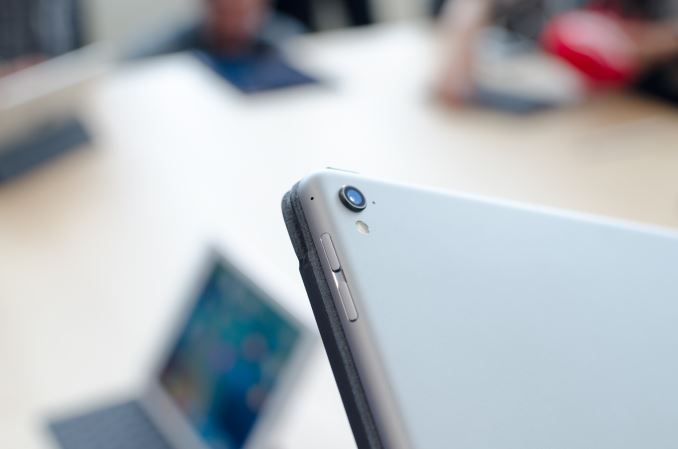 Of course, the speakers are also shared with the iPad Pro, but in this case I wasn’t really able to test them properly as the hands on environment is rather chaotic and loud. I wouldn’t be surprised to know that the same speaker protection ICs are shared with the larger version of the iPad Pro for logistics reasons, but I wasn’t able to confirm that this is the case at the event. Similarly, the camera was not properly tested at the event as it wasn’t possible to do a proper comparison in the hands on environment.

The one other notable change that the 9.7” iPad Pro brings is True Tone display, which adjusts color temperature of the display based upon ambient light conditions. It turns out that this is something that you can toggle on and off on the fly, and the result that it produces seems to be designed to make the display more consistently neutral while other Apple mobile devices tend to end up with a colder white balance in most conditions. I didn’t see a toggle for color gamut, so it’s likely that the iPad Pro 9.7” is using either color management to enable a wider gamut on the fly or just displaying a wider color gamut all the time. To figure out which way Apple went here we’ll need to try a review unit, but given just how much emphasis Apple has placed on their displays I would be surprised if Apple wasn't employing color management. 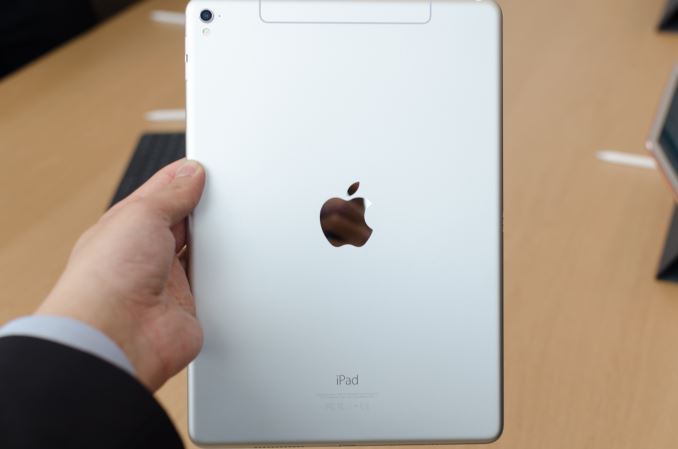 Other than these points of differentiation, the iPad Pro 9.7” pretty much feels like any other iPad. However, there are a few notable changes to the design, including a camera hump to handle the 12MP camera and replacing the large plastic RF window on the LTE variants with an external aluminum antenna and insulating plastic to separate it from the rest of the chassis. It’s appreciably lighter than the iPad Pro 13”, but feels pretty much identical to the iPad Air 2 in terms of size and weight.

Overall, if you liked the 13” iPad Pro but didn’t want to deal with the extra size or weight, it looks like this will be exactly what you’re looking for.