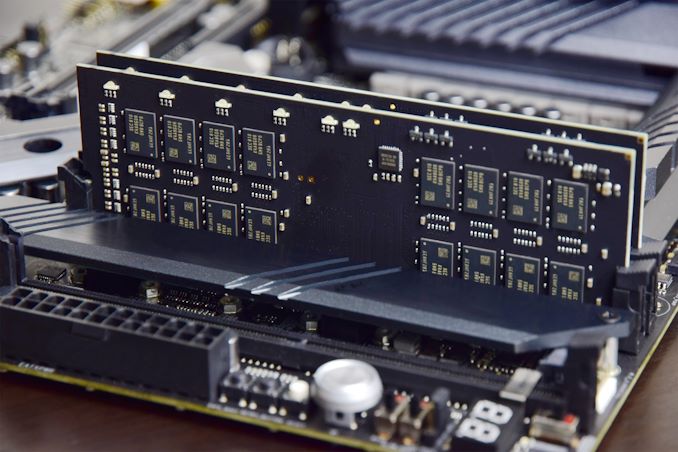 Two memory module companies, G.Skill and ZADAK, have developed a new memory format with double capacity DDR4 memory. These new modules put the equivalent of two standard modules onto one PCB, making one memory module act like two. Both companies have introduced 2x32 GB kits. As a result, these memory modules are double the capacity over regular DDR4 memory, with the downside that they are also double the height. We have tested both of the available kits using this technique, both coming in at DDR4-3200: the G.Skill TridentZ RGB DC DDR4-3200 and the ZADAK Shield RGB DC DDR4-3200.

There are currently three motherboards on the market validated for this new double height memory:

These are all Z390 chipset motherboards, and thus applies to Intel's 8th Gen and 9th Gen processors. In this review we used an i7-8700K, and it didn't have any issues. We tested on some other motherboards from MSI and ASRock, however those systems did not post. It would appear that the memory has been developed in conjuction with concurrent validation with ASUS.

Each memory company is only offering a select number of kits, presumably due to the low catchment rate of the motherboards they are validated for, but also likely due to cost.

All of these kits (except ZADAK's DDR4-2666) have a rated voltage of 1.35 V. G.Skill's kits do not have associated MSRPs due to the way G.Skill operates, however ZADAK has shared that their memory kits will start from an MSRP of $800.

The benefit of dense(r) memory is thatmotherboards can double up on maximum capacity without needing four memory slots. All three motherboards listed, the Apex, Gene, and the Z390-I Gaming, only have two memory slots which makes them ideal targets, even though only one is mini-ITX and the other two could have had four memory slots in place. The reason why only these ASUS motherboards are supported at this time is due to the collaboration between the companies: ZADAK says the modules were 'co-developed', but failed to go into detail about who designed what. Nonetheless, these modules are ASUS exclusive for the time being.

Using memory that is double the height of a normal module, certain other restrictions come into play: namely the CPU cooler being used has less room to exist. 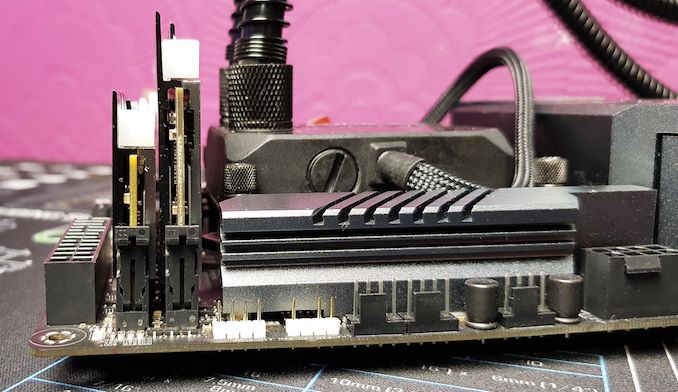 The almost universal intention in this environment, unless a low powered CPU is used, is for a liquid cooler to be in play.

We'll go into more detail on the specific kits over the page, but both memory modules work in a similar fashion. 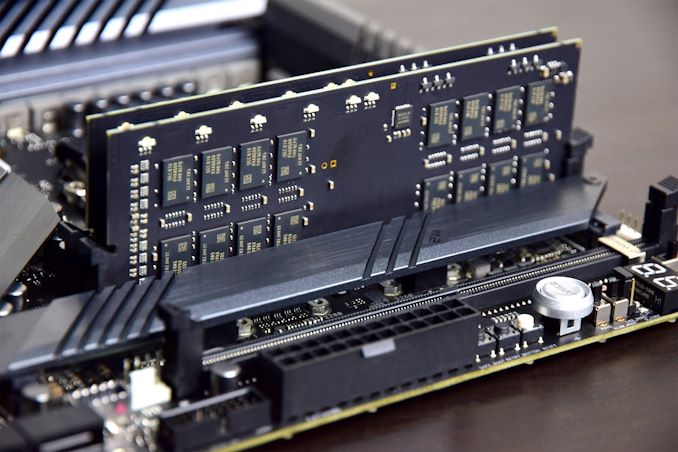 Using 8 Gb Samsung B-die chips, a normal 16 GB module would have 16 of them to make it up to capacity. For these modules, to reach 32 GB per module, there are 32 x 8 gigabit chips. These are split into two ranks of sixteen chips, and act as if there are two memory modules on the same channel. Modern mainstream processors support 'two DIMMs per channel', meaning two memory modules per channel, which is why we see motherboards for dual channel processors have a total of four slots. By putting two modules onto one PCB, only one slot is needed to hit 'two DIMMs per channel'.

One would assume the signalling would be different, however within the same channel, a normal set of memory modules would use the same traces and either (a) daisy chain, or (b) split near the end in order to support both simulateously. There are stability advantages to the (b) method, known as T-Topology, however it is often more difficult to do. Either way, because two memory modules on the same channel do not need separate motherboard traces, that is what makes these modules possible. There are some additional fine tuning elements to the system as well, as with all memory.

Ultimately any memory vendor's chips could have been used, but both G.Skill and ZADAK have gone with Samsung B-die, which are known for being good overclocking-focused memory. It likely also helps that the optimizations for one company's kit also helped with the second, as different ICs would have different requirements in the firmware.

Ultimately with this review, we want to answer the following questions:

The goal for both answers should be negative: we shouldn't expect any performance difference and no power difference. We also do some overclocking to see if they can be pushed harder even in this form factor.

Our motherboard benchmarking suite which includes our short form CPU performance tests and gaming tests were selected in conjunction with our new 2019 bench suite. Our test bench OS has been updated with drivers, newer software and as with our CPU testing updates, also includes Spectre and Meltdown patches.