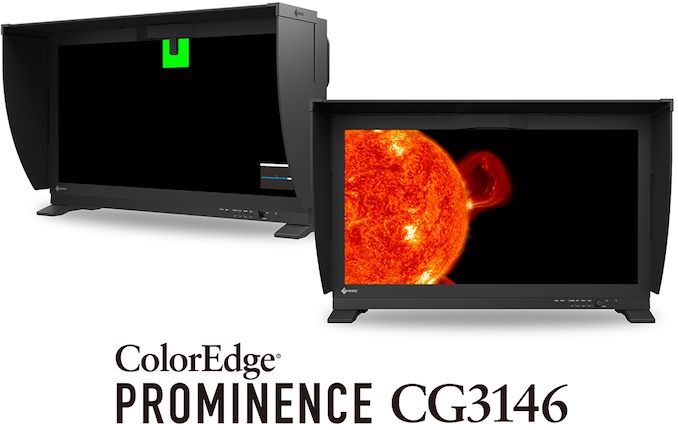 Well known for their high-end and reference-quality monitors, EIZO has introduced their latest reference monitor, the ColorEdge Prominence CG3146, which is designed for HDR content mastering for the broadcast and film industries. The new 31.1-inch monitor largely builds upon technologies developed for its predecessor, the CG3145, but has a number of enhancements, including a built-in calibration sensor and SDI connectivity.

The EIZO ColorEdge Prominence CG3146 monitor is based on a 10-bit IPS panel with a 4096×2160 resolution. All told, the monitor can reproduce 1.07 billion colors, and is assisted by EIZO’s proprietary wide-gamut LED backlighting. According to EIZO, the high-end backlighting tech can control backlight intensity on a per-pixel basis, which enables the LCD to display intensively bright colors and deep blacks without the kind of artifacts seen on monitors with coarser backlighting systems. By the numbers, the CG3146 offers a typical brightness of "just" 1000 nits, but also hits a rather whopping 1,000,000:1 contrast ratio.

The ColorEdge Prominence CG3146 covers 99% of the DCI-P3 color gamut and also supports sRGB, BT.2020, and BT.2100 color spaces. The monitor features a 24-bit 3D LUT (look-up table) for smooth color gradations and supports HLG (hybrid log-gamma) and the PQ (perceptual quantization) curve so that it can be used with various HDR modes/transports. For example, HLG’s luminance tops at 1000 nits (which is suitable for TVs), whereas  PQ supports considerably higher brightness of up to 10,000 nits, which is required for recorded content.

Color accuracy is absolutely crucial for post production and color grading workloads, so the ColorEdge Prominence CG3146 comes with an integrated sensor that calibrates the monitor when needed and eliminates the need for an external calibrator device. Meanwhile, apart from qualities of the panel and backlighting, it depends on such factors as ambient and internal temperature of the monitor. To that end, the ColorEdge Prominence CG3146 is equipped with a temperature sensor that measures temperature inside the monitor and estimates temperature outside of it to adjust LCD’s settings in real time to ensure accurate colors. Moreover, the EIZO’s digital uniformity equalizer (DUE) technology not only ensures the right luminance, color temperature, and tones for stable image display across the screen, but also counterbalances the effects that a changing temperature may have on uniformity. Last but not least, the display has a light shielding hood. 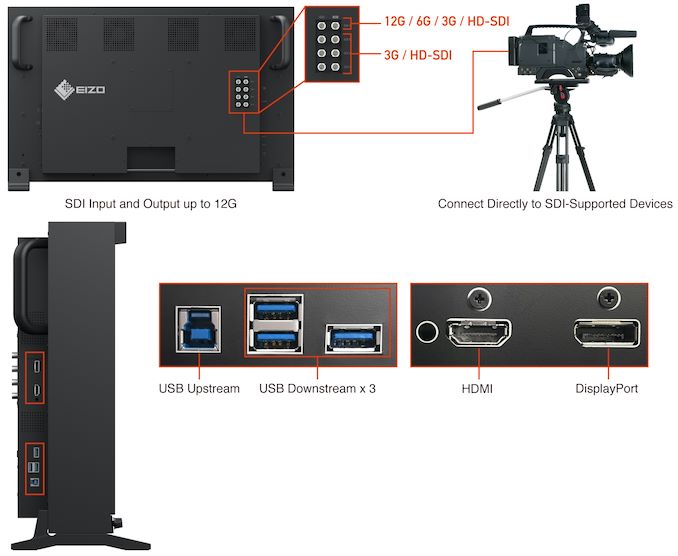 Moving on to connectivity, EIZO’s new flagship HDR reference display offers an important improvement here. As expected, the ColorEdge Prominence CG3146 has a DisplayPort capable of DCI-4K with 4:4:4 chroma subsampling at 50/60 Hz, as well as an HDMI 2.0 input capable of DCI-4K with 4:2:2 at 50/60 Hz. Furthermore, the monitor has 12G/6G/3G/HD-SDI BNC inputs and outputs to connect SDI supporting devices, which is a huge improvement for the film and broadcasting industries.

EIZO will demonstrate its ColorEdge Prominence CG3146 flagship HDR reference monitor at NAB trade show in Las Vegas, Nevada, in in late April. The company intends to start shipments in April too, but the exact availability timeframe will vary from country to country.

The monitor is covered by a five-year warranty. Though it should be noted that, like other reference monitors based on similar tech, the company is only guaranteeing the monitor's operation for 30,000 hours of usage. The guarantee on brightness and color accuracy, in turn, is even tighter: the monitor's warranty only covers 10,000 hours there, and only when used at a color temperature of 6500K at 800 nits brightness.