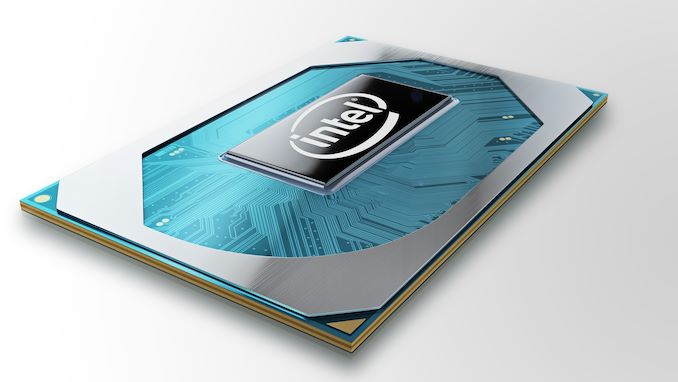 Two of the big announcements out of CES this year were both mobile related: Intel and AMD announced they would be launching new gaming laptop processors into the market in the first half of this year. 45 W parts, also known as H-series in the business, provide the basis for productivity and gaming notebooks that use additional graphics to give some oomph. These systems span from thin and light with GPU requirements, through ‘luggables’ that are just about portable, all the way up to desktop replacement designs. Intel’s newest 10th Gen H-Series are based on the Comet Lake family, the fifth iteration of Intel’s 14nm Skylake designs, and they’re going all the way up to 5.3 GHz*.

The new CPU list from Intel starts with the Core i9-10980HK at the top, with eight cores, sixteen threads, and all the focus is on that 5.3 GHz turbo frequency.

*This CPU can hit this frequency on two cores. However this has some specific requirements: the system needs to be within its secondary power limits, and Intel’s Thermal Velocity Boost also needs to be turned on. The latter of which means that there has to be additional thermal headroom in the system, and that OEMs have designed for this and enabled it within the system. This allows the CPU to go from 5.1 GHz to 5.3 GHz. Every Intel Thermal Velocity Boost enabled CPU requires specific OEM support in order to get those extra two bins on the single core frequency.

The base frequency of this chip is 2.4 GHz, and it has a regular 45 W TDP (sustained power), which can be run in cTDP up mode for 65 W. Two other plus points on this chip is that it is unlocked, for when an OEM provides more thermal headroom, and it supports DDR4-2933, which is an upgrade over the previous generation. Intel's recommended PL2 (turbo power) for the Core i9 is 135 W, and Intel says the recommended 'Tau' is set to 56 seconds for the i9, and 28 seconds for all the other CPUs. OEMs don't often adhere to these values for notebooks, but they are provided as a guide. It does mean that in order to hit 5.3 GHz, the Core i9 is by default allowed to take 135 W across two cores, or 67.5 W per core. Even at 60W per core, you're looking at 50A of current per core... in a laptop.

Intel only has a single Core i9 at the top, with the top grade i7 also getting 8 cores, but only up to 5.1 GHz and no overclocking. The Core i7-10850H is going to be the second exciting part over the i9, with six cores and a 5.1 GHz turbo, but it allows an additional 4-bin overclock on the first two cores where thermals allow. All of the CPUs here are listed as 45 W, and all support DDR4-2933 memory (up to 128 GB we believe). Due to Intel Thermal Velocity Boost, all the i7 and i9 parts are +200 MHz above what they would be without the technology, with frequencies that we are more used to seeing on the 9th Generation.

Intel states that there will be 30+ designs using the new 10th Gen Comet Lake-H that fit within the ‘thin and light’ profile of 20mm, and 100+ designs in total across consumer, commercial and workstation. Intel is keen to highlight that it is the only CPU vendor that has OEM partners that provide HDR1000 panels and 300 Hz refresh displays in this market. 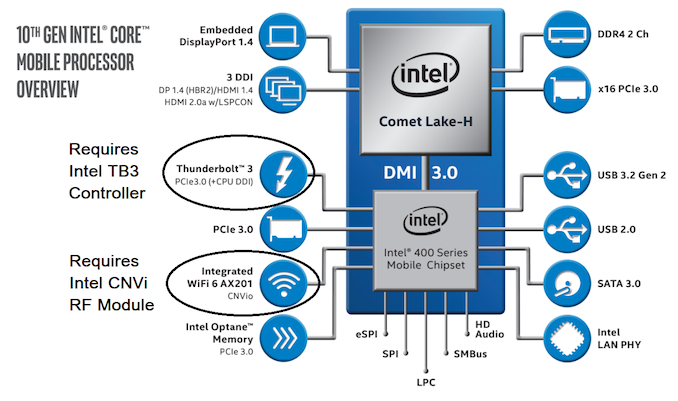 Intel also made a big fuss about TB3 support, although it isn’t native here – you still require a controller. One positive for 10th Gen is that it supports two TB3 controllers, rather than previous generations that only supported one. Though again, it depends on whether the OEM puts it in their system, because it isn’t native to the CPU.

We’re not going to post Intel’s benchmarks here, because to be quite honest they are not comparable. In gaming tests, Intel compares a 10980HK equipped with a RTX 2080 Super to a 7820HK equipped with a GTX 1080. As a result, a lot of difference in the gaming performance is going to be in the GPU, but also the graphs that they showed did not start at zero – suggesting that the graph somehow doubled despite only rising 44% in a select test. We’re going to wait to see for ourselves what the hardware can do.

Intel did show a die shot of the silicon, with all of its eight cores. It looks strikingly similar to the Coffee Lake 8-core silicon, because it’s practically identical. If there are any changes, it is minor, and then the chip is binned for the voltage profile. 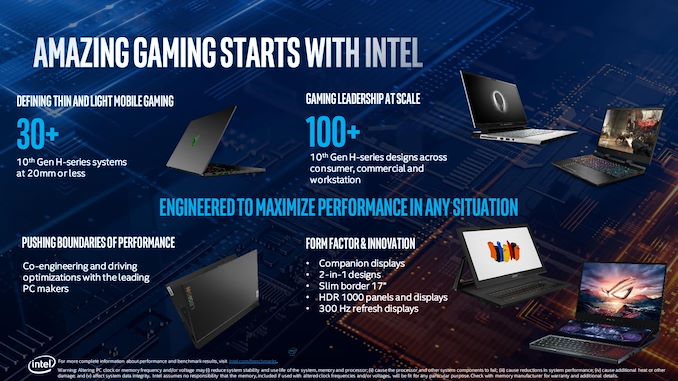 Meanwhile, although none of Intel’s partners were named or otherwise involved in Intel's own announcement, they have been holding separate briefings regarding their laptop plans. MSI, Lenovo, Acer, and others are all releasing 10th Gen laptops as soon as April 15th, with the rest to follow in May. Broadly speaking, expect to see many vendors update existing 9th Gen gaming systems to include 10th Generation parts, though in the case of gaming laptops we're going to see the occasional, more substantial update to take advantage of NVIDIA's new hardware and thermal capabilities.

Intel’s competition here is going to be the recently launched Ryzen Mobile 4000 processors, in devices like the ASUS Zephyrus G14 and the Dell G5 SE. These new APUs were launched on 1st April, however unfortunately we were not told of an embargo change, and still expected the launch to be another two weeks later. We’re aiming to get our review out next week. When we get access to Intel’s 10th Gen H-series, we will compare it against AMD as well.