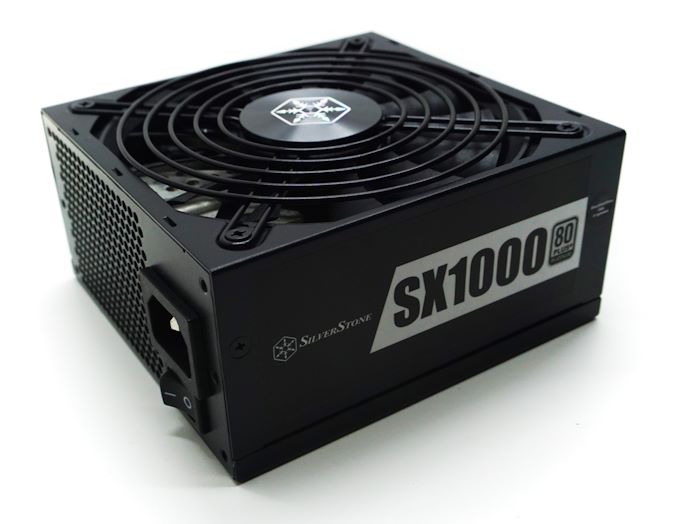 For better or worse, the amount of power required by top tier PC gaming systems has been on the rise over the last few years. Lead in large part by a leap in video card power consumption – gone are the days where a flagship video card would draw just 250 Watts – the required and recommended wattages for high-end systems have started encroaching on the kind of power that dual GPU systems required barely half a decade ago. So although dual GPU configurations themselves have all but died, their high power requirements have been replaced with even more energy-hungry video cards and CPUs.

All the while this has been going on, it's created something of an usual side benefit of dual GPU gaming systems going the way of the dodo: you can get true flagship-level performance in an impressively small system. Small form factor PCs are of course hardly new, but previously there was always some trade-off in the total amount of stuff you could, well, stuff in such a system. A second video card, another 2.5-inch SSD, etc. The death of dual GPU systems has done away with that issue, but now it's created another issue: powering a modern dense, high wattage system.

For a typical ATX system this isn't a problem, as there are myriads of products available and users can easily find very powerful and reliable PSUs at reasonable prices. However, this quickly becomes an issue with small form factor systems, where the availability of high output PSUs is relatively low. And this brings us into the realm of more specialty form factors.

Over the past couple of years, several of the larger PSU manufacturers released compact SFX and SFX-L PSUs that were designed to match the power requirements of powerful gaming systems. With power output ratings reaching 700 Watts or more, some of them could even power flagship-level PC gaming systems. This was quite the feat considering that finding a quality SFX PSU even for a mainstream gaming system was a very difficult task until a few years ago.

But, for some customers, even 700 Watts isn't going to be enough. Especially as you start blending over into the high-end workstation space – think multiple Radeon Pro workstation cards here – even more power is required. So to fill that role SilverStone has rolled out a 1000 Watt SFX-L form factor PSU, the SX1000.

Already well-known for products like their SFX design-pushing SX800-LTI 800W PSU, the company has gone back to the drawing board in an effort do one better. We did not expect that the company would easily manage to squeeze even more power out of an SFX PSU, and yet nearly three years after the release of the SX800, here we are: SilverStone has an SFX-L PSU with the frightening output of 1 kW. This currently is the most powerful SFX-L PSU on the market, so of course we need to take a look at it to see how it stacks up.

SilverStone supplies the SX1000 into a fairly large cardboard box that could easily fit a regular ATX unit in it. The box is very sturdy and we found the PSU sandwiched between thick polystyrene foam pieces inside, providing ample shipping protection. The artwork is relatively simple, with a blue and gold visual theme, and mostly limited to pictures of the unit itself. 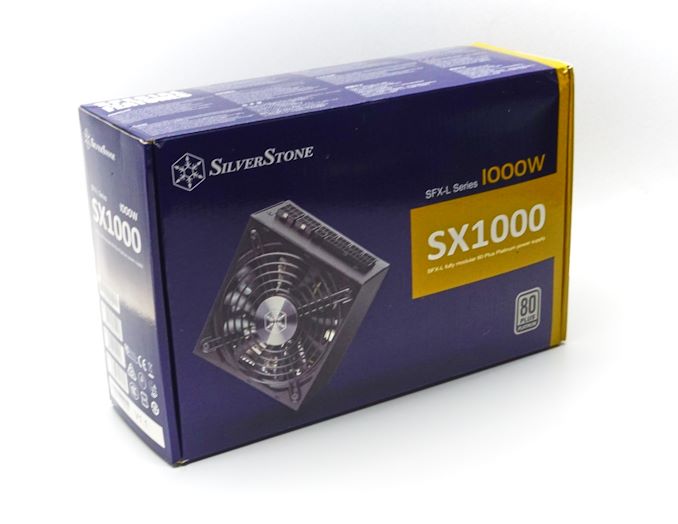 Inside the box, we found a fair bundle for a good PSU. Aside from the manual and datasheet, there is a typical AC power cable, a few cable ties, a few plain cable straps, four black thumbscrews, and four black M3.5 mounting screws. Strangely, SilverStone does not supply an SFX-to-ATX adapter with the SX1000. The company used to do so in the past with models that had almost half the power output of the SX1000, making it a noticeable and strange departure, especially as these powerful units are far more likely to find their way into ATX-compliant cases than low-output models. 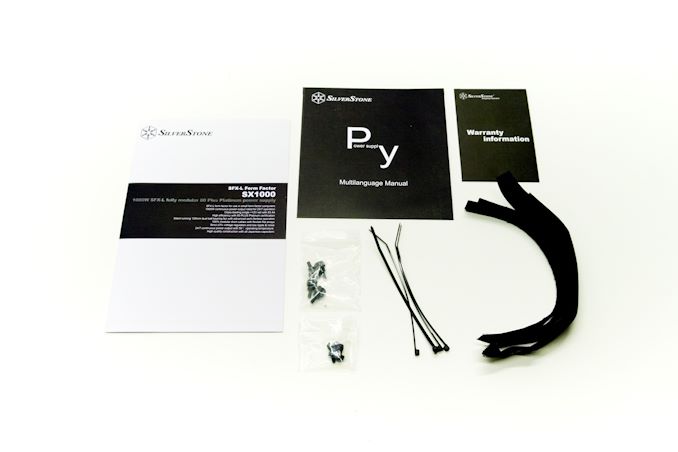 The SX1000 is a fully modular PSU, meaning that every cable can be detached, including the 24-pin ATX cable. Making the 24-pin ATX cable detachable usually does not make any practical sense, but it does in this case: allowing the user can replace the short 12” ATX cable with a longer version if the PSU is going to be installed inside an ATX case. Without any exception, all of the cables are “flat” type cables, with black wires and black connectors. 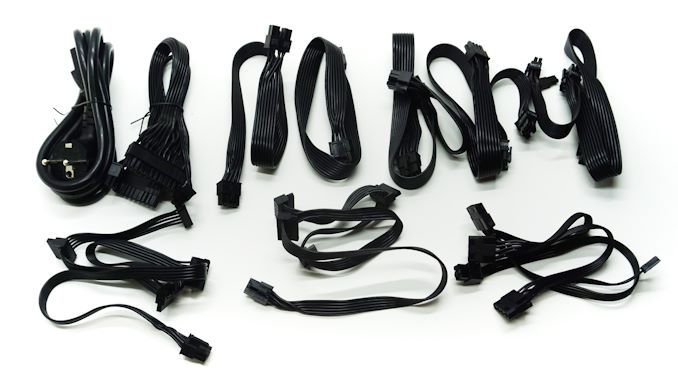 The SilverStone SX1000 is an SFX-L unit, meaning that it is based on the SFX standard but it is 30 mm deeper. Its chassis measures 125 (W) × 63.5 (H) × 130 (D) mm (4.92 x 2.5 x 5.12 inches), which does limit the compatibility of the PSU, as several SFX-compliant cases do not provide that kind of clearance. Nevertheless, cases meant to hold SFX PSUs and multiple/oversized video cards should all be providing enough clearance for an SFX-L PSU. 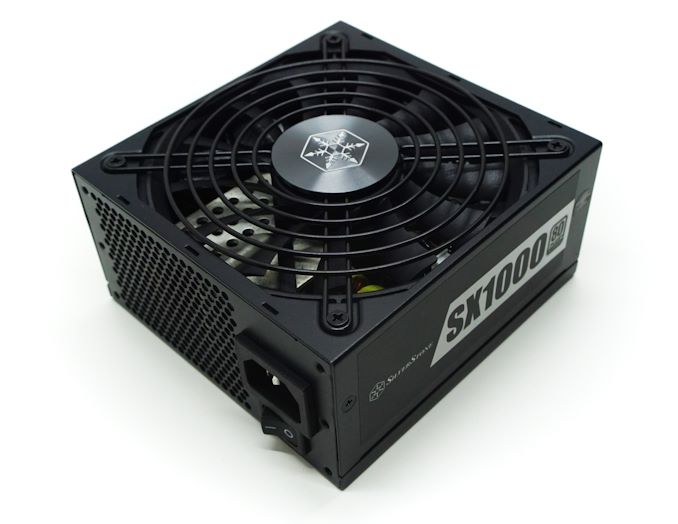 SilverStone is not a company that designs visually extravagant products and the SX1000 sticks to that tradition, with the designer sticking to a classic all-black design. The chassis is sprayed with satin black paint but most of its surface is covered by stickers. The stickers on the sides of the unit only display the company and product logos, whereas the sticker that covers the entirety of the unit’s top side hosts the basic electrical specifications and certifications of the unit. At the bottom side of the unit, we can see the black fan and the finger guard, with a metallic crest featuring the company’s logo covering the fan’s engine. 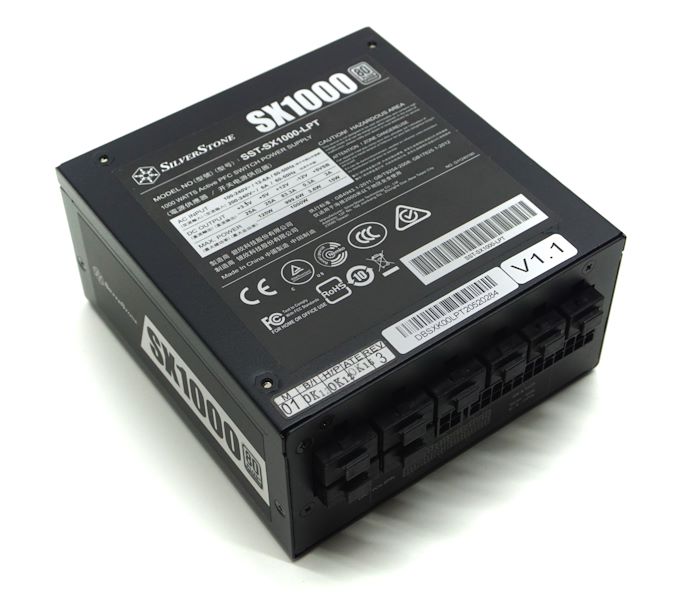 Despite the very cramped space requirements, the designer still managed to fit an on/off switch next to the AC receptacle. The front side of the unit is covered by numerous cable connectors, along with a sticker that hosts a basic legend. All of the cable connectors except those of the ATX cable are covered with plastic protective caps. 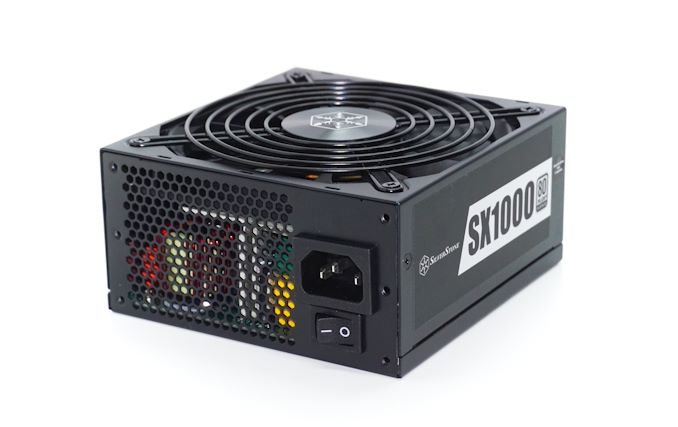 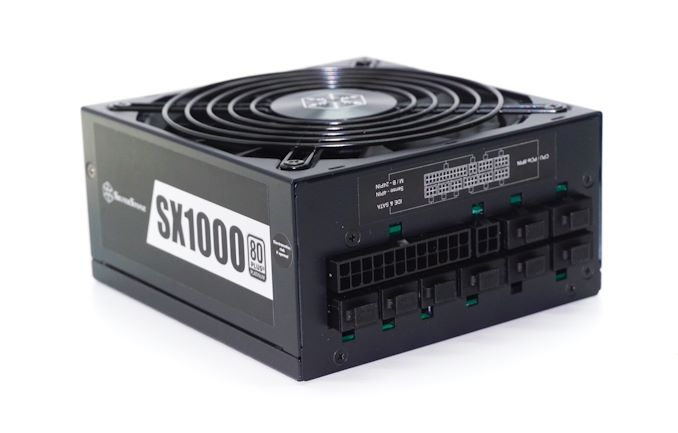 A major advantage of the SFX-L form factor is that it allows for 120 mm fans to be installed, a necessity for the cooling requirements of such a powerful unit. Globe supplies the low profile 120 mm fan, which is a double ball bearing model with a maximum speed of 2400 RPM at 12 Volts. This is a strange choice by SilverStone, as the company usually prefers to use sleeve bearing fans because of their lower noise output, even for their top-tier products. 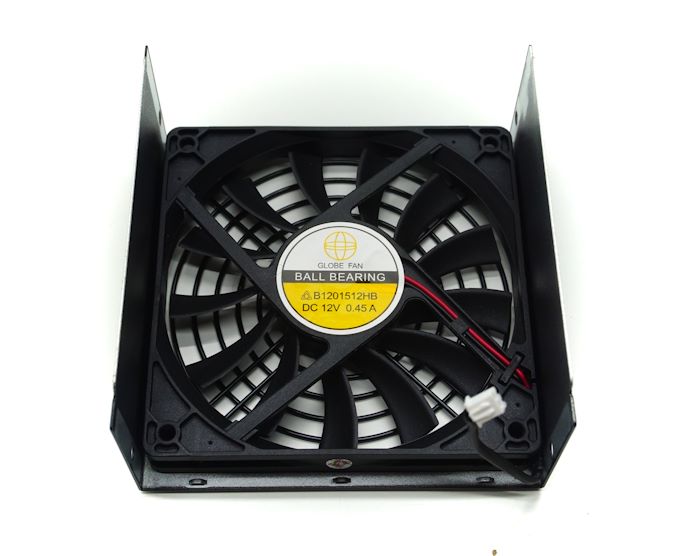 Although the SX1000 externally reminds us of the older SX800-LTI, they are nothing alike internally. The OEM behind the creation of the PSU remains the same with Enhance Electronics, the company behind most of SilverStone’s PSUs. That is where the similarities end though, as the SX1000 is based on a newer, different platform. 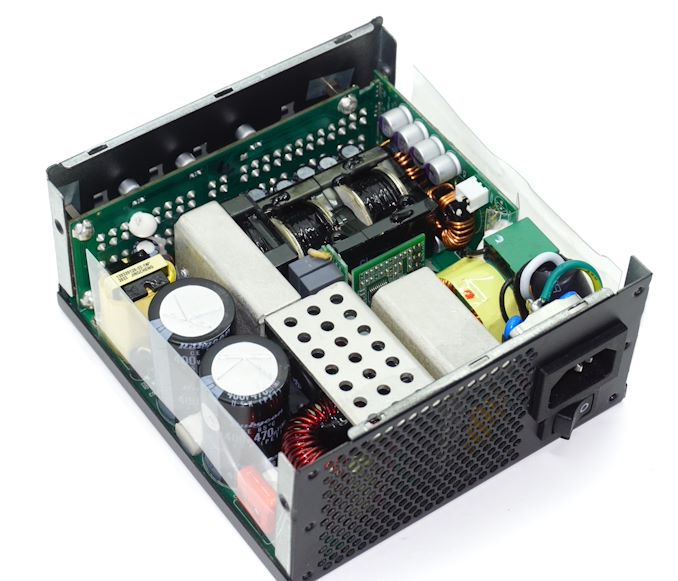 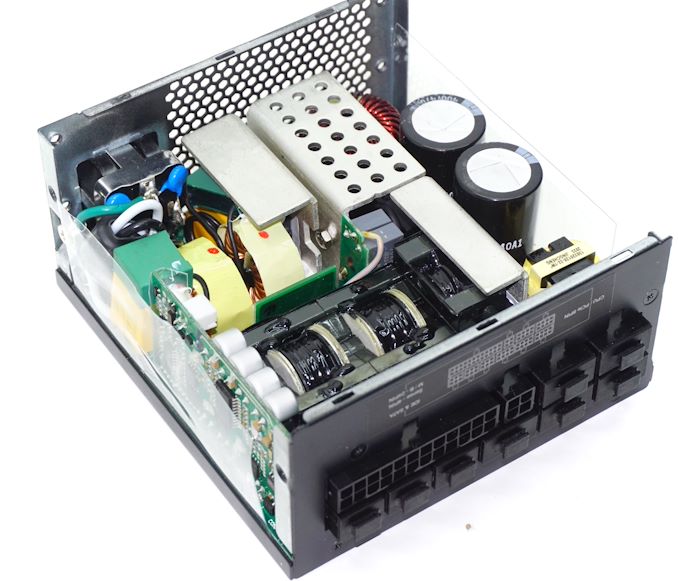 The filtering stage of the SX1000 is slightly beefed up, as it begins at the rear of the AC receptacle and continues onto the main PCB, with four Y capacitors, four X capacitors, and two filtering inductors. There are two APFC capacitors, supplied by Rubycon, rated at 400 V / 470 μF each. A large filtering inductor sits right next to them. The heatsinks are rather basic for a PSU with that kind of output, with relatively little mass and surface area. We would not expect to see such heatsinks in ATX units rated above 600 Watts, yet the limited space in the SX1000 requires certain sacrifices. That does not mean that the temperatures of the components should skyrocket but does hint the use of special very low loss parts that will generate minimal amounts of heat – which also are relatively costly. 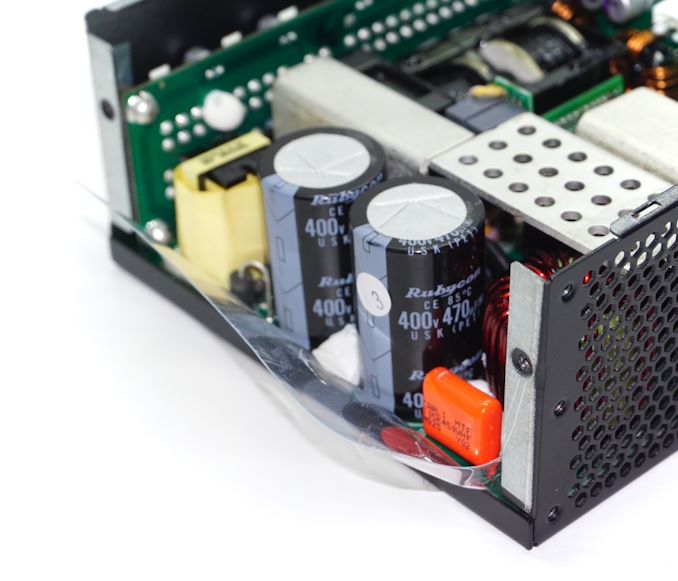 The primary inversion circuit is a proven with an LLC resonant full-bridge topology. Eight MOSFETs generate the 12 V rail on the secondary side of the unit. The minor rails are being generated via DC-to-DC converters. The strange part here is that the topologies of the SX1000 are a step up compared to the half-bridge topology of the SX800-LTI, yet the unit still failed to receive an 80Plus Titanium efficiency certification. The capacitors on the secondary side are a mix of electrolytic and solid-state products, with most of them supplied by UniCon. There are a couple of small Rubycon electrolytic capacitors in there as well. 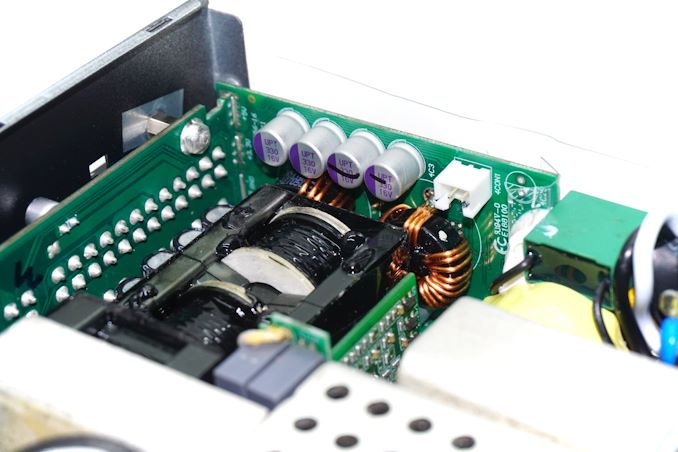 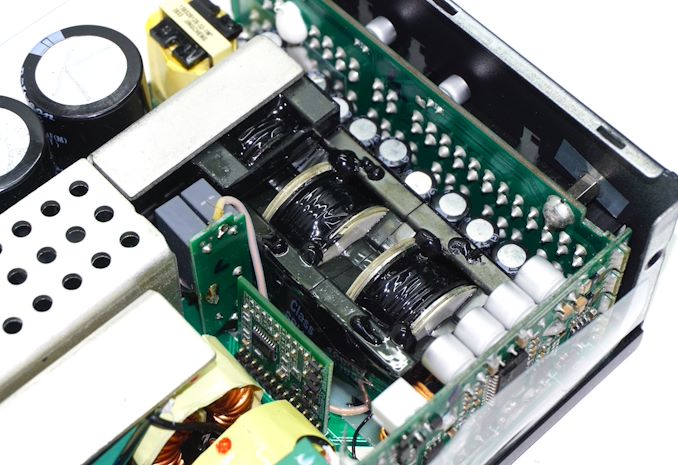