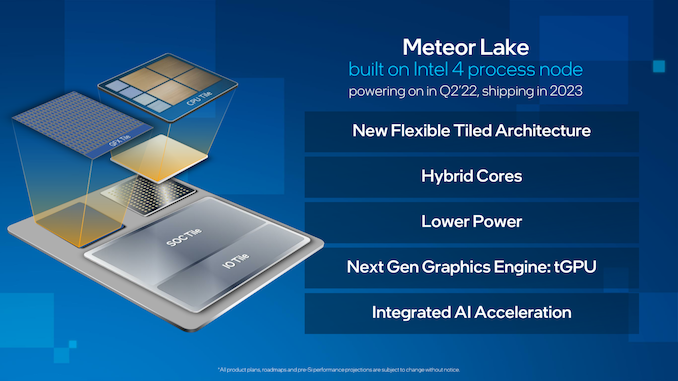 Alongside Intel’s regular earnings report yesterday, the company also delivered a brief up on the state of one of their most important upcoming products, Meteor Lake. Intel’s first chiplet/tile-based SoC, which completed initial development last year, has now completed power-on testing and more. The news is not unexpected, but for Intel it still marks a notable milestone, and is important proof that both Meteor Lake and the Intel 4 process remain on track.

Meteor Lake, which is slated to be the basis of Intel’s 14th generation Core processors in 2023, is an important chip for the company on several levels. In terms of design, it is the first chiplet-based (or as Intel likes to put it, “disaggregated”) mass-market client SoC from the company. Intel’s roadmap for the Core lineup has the company using chiplet-style SoCs on a permanent basis going forward, so Meteor Lake is very important for Intel’s design and architecture teams as it’s going to be their first crack at client chiplets – and proof as to whether they can successfully pull it off.

Meanwhile Meteor Lake is also the first client part that will be built on the Intel 4 process, which was formerly known as Intel’s 7nm process. Intel 4 will mark Intel’s long-awaited (and delayed) transition to using EUV in patterning, making it one of the most significant changes to Intel’s fab technology since the company added FinFETs a decade ago. Given Intel’s fab troubles over the past few years, the company is understandably eager to show off any proof that its fab development cycle is back on track, and that they are going to make their previously declared manufacturing milestones.

As for this week’s power-on announcement, this is in-line with Intel’s earlier expectations. At the company’s 2022 investor meeting back in February, in the client roadmap presentation Intel indicated that they were aiming for a Q2’22 power-on.

We have officially powered-on our first disaggregated product: Meteor Lake. An incredible milestone resulting from the efforts of so many across @intel. Congratulations, team! pic.twitter.com/eKvHzDqSiu

In fact, it would seem that Intel has slightly exceeded their own goals. While in a tweet put out today by Michelle Johnston Holthaus, the recently named EVP and GM of Intel’s Client Computing Group, announced that Meteor Lake had been powered on, comments from CEO Pat Gelsinger indicate that Meteor Lake is doing even better than that. According to Gelsinger’s comments on yesterday’s earnings call, Meteor Lake has also been able to boot Windows, Chrome, and Linux. So while there remains many months of bring-up left to go, it would seem that Meteor Lake’s development is proceeding apace.

But that will be a story for 2023. Intel will first be getting Raptor Lake out the door later this year. The Alder Lake successor is being built on the same Intel 7 process as Alder Lake itself, and will feature an enhanced version of the Alder Lake architecture.