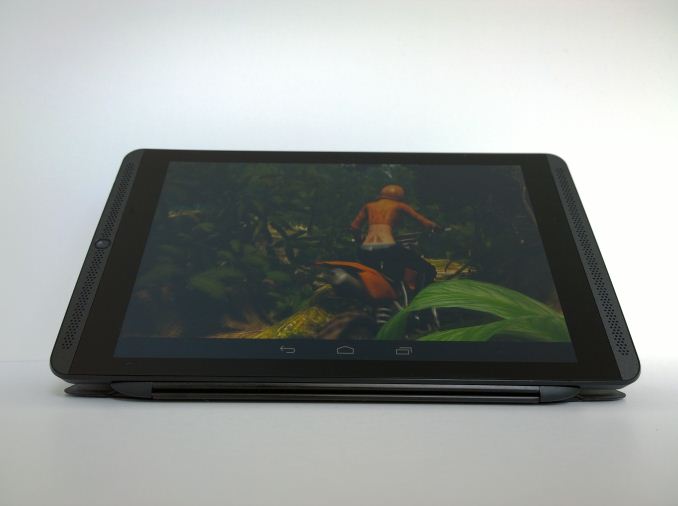 One of the first issues that I attempted to tackle after the review was battery life performance in our T-Rex rundown when capping FPS to ~30, which was still enough to exceed the competition in performance, and avoid any chance of throttling. This also gives a much better idea of real world battery life, as most games shouldn't come close to stressing the Kepler GPU in Tegra K1. 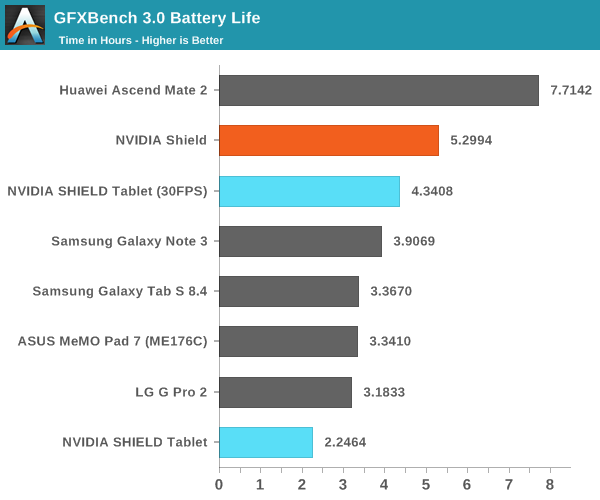 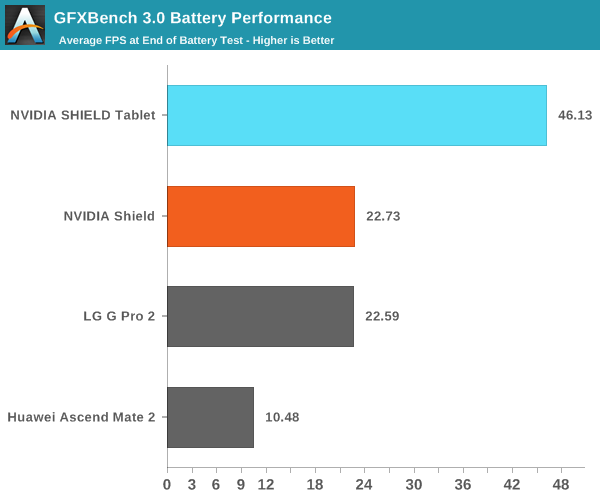 By capping T-Rex to 30 FPS, the SHIELD Tablet actually comes quite close to the battery life delivered by SHIELD Portable with significantly more performance. The SHIELD Portable also needed a larger 28.8 WHr battery and a smaller, lower power 5" display in order to achieve its extra runtime. It's clear that the new Kepler GPU architecture, improved CPU, and 28HPm process are enabling much better experiences compared to what we see on SHIELD Portable with Tegra 4.

The other aspect that I wanted to revisit were temperatures, I mentioned that I noticed skin temperatures were high, but I didn't know what they really were. In order to get a better idea temperatures in the device, Andrei managed to make a tool to log such data from on-device temperature sensors. Of course, the most interesting data is always generated at the extremes, so we'll look at an uncapped T-Rex rundown first. 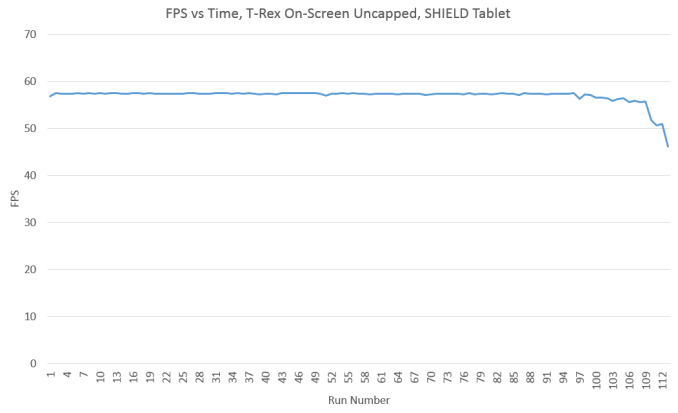 In order to understand the results I'm about to show, this graph is critical. As ambient temperatures were lower (15-18C vs 20-24C) when I ran this variant of the test, we don't see much throttling until the end of the test where there's a dramatic drop to 46 FPS. 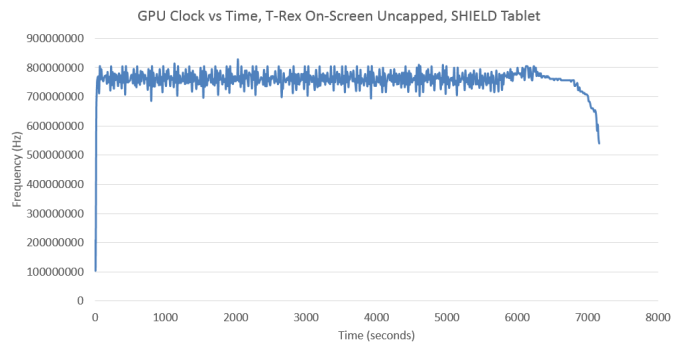 As we can see, the GPU clock graph almost perfectly mirrors the downward trend that is presented in the FPS graph. It's also notable that relatively little time is spent at the full 852 MHz that the graphics processor is capable of. The vast majority of the time is spent at around 750 MHz, which suggests that this test isn't pushing the GPU to the limit, although looking at the FPS graph would also confirm this as it's sitting quite close to 60 FPS throughout the run. 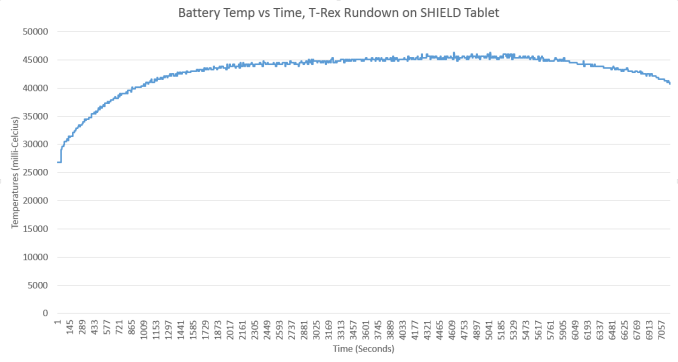 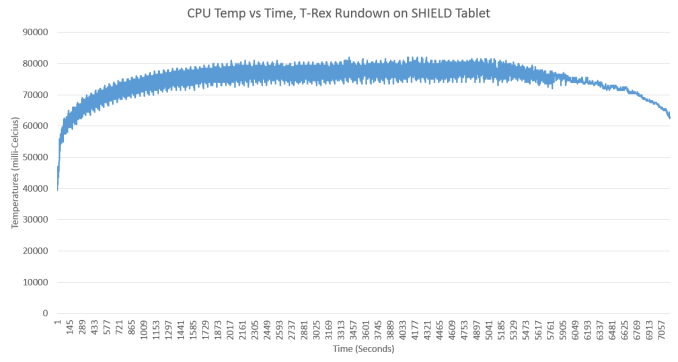 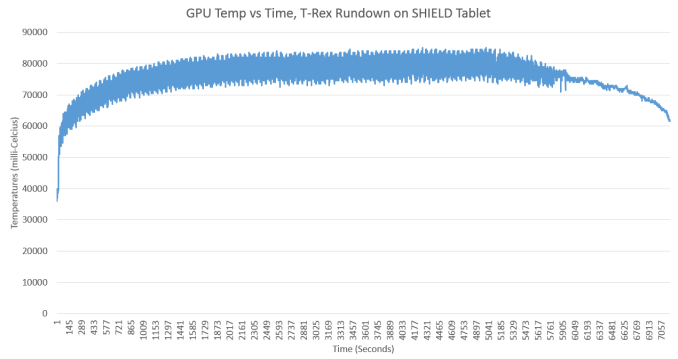 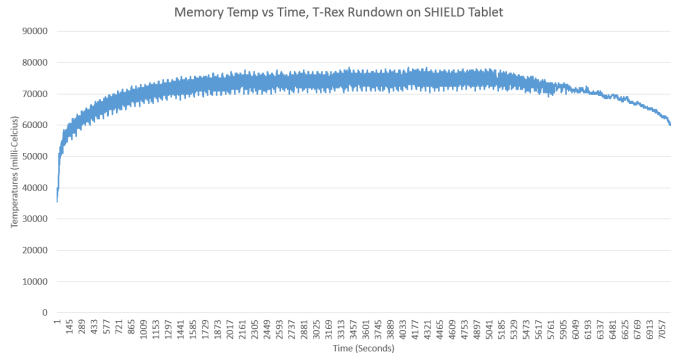 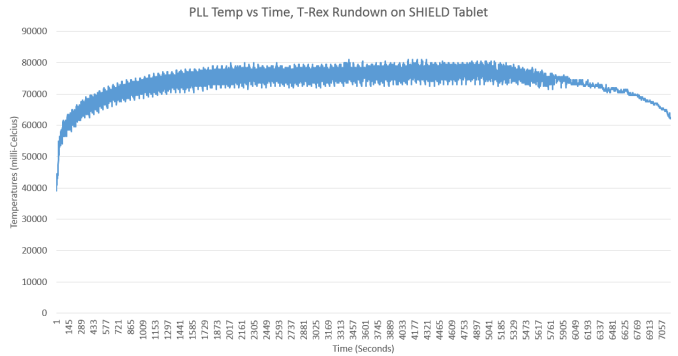 On the other hand, it's a bit unrealistic for games not developed for Tegra K1 to push the GPU to the limit like this. Keeping this in mind, I did another run with the maximum frame rate capped to 30 FPS. As even the end of run FPS is over 30 FPS, showing the FPS vs time graph would be rather boring as it's a completely flat line pegged at 30 FPS. Therefore, it'll be much more interesting to start with the other data I've gathered. 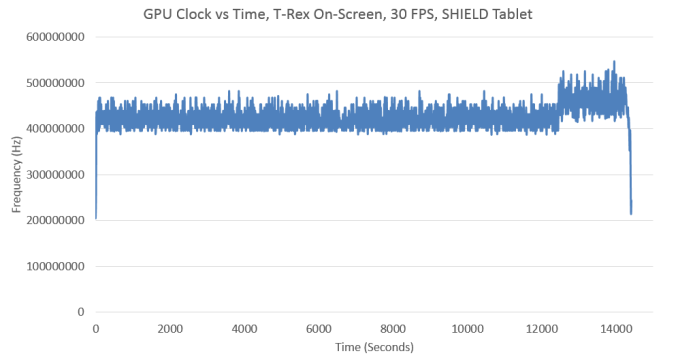 As one can see, despite performance near that of the Adreno 330, the GPU in Tegra K1 sits at around 450 MHz for the majority of this test. There is a bit of a bump towards the end, but that may be due to the low battery overlay as this test was unattended until the end. 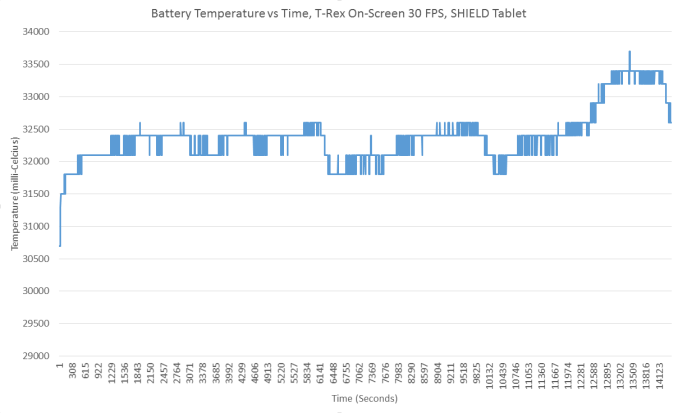 In addition to the low GPU clocks, we see that the skin temperatures never exceed 34C, which is completely acceptable. This bodes especially well for the internals, which should be much cooler in comparison to previous runs. 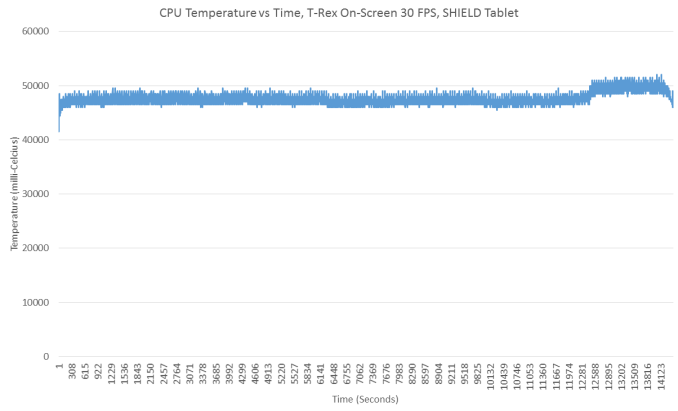 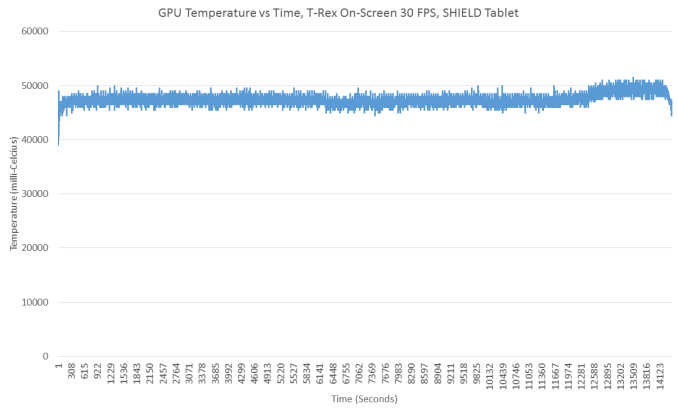 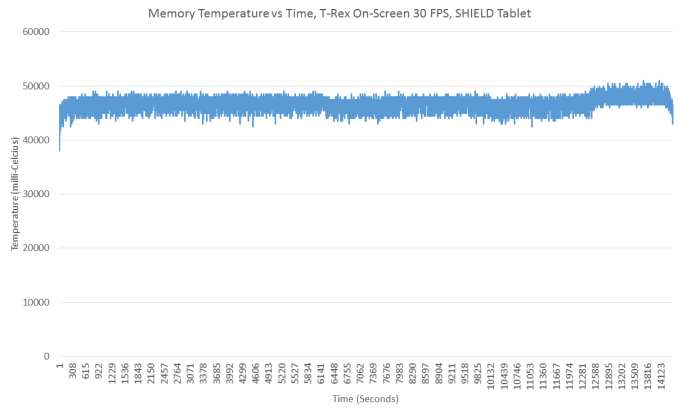 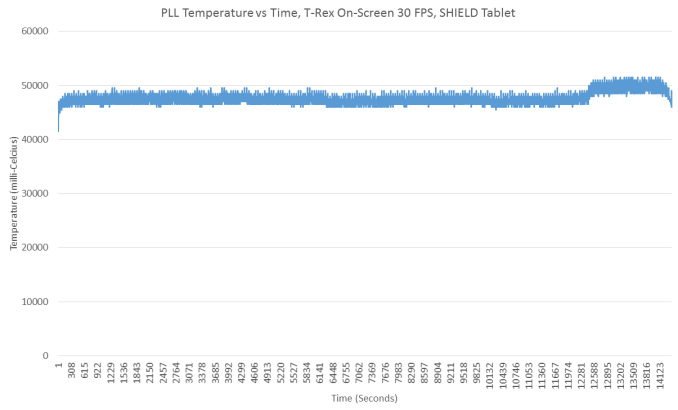 Here, we see surprisingly low temperatures. Peak temperatures are around 50C and no higher, with no real chance of throttling. Overall, this seems to bode quite well for Tegra K1, even if the peak temperatures are a bit concerning. After all, Tegra K1 delivers immense amounts of performance when necessary, but manages to sustain low temperatures and long battery life when it it isn't. More importantly, it's important to keep in mind that the Kepler GPU in Tegra K1 was designed for desktop and laptop use first. The Maxwell GPU in NVIDIA's Erista SoC is the first to be designed to target mobile devices first. That's when things get really interesting.