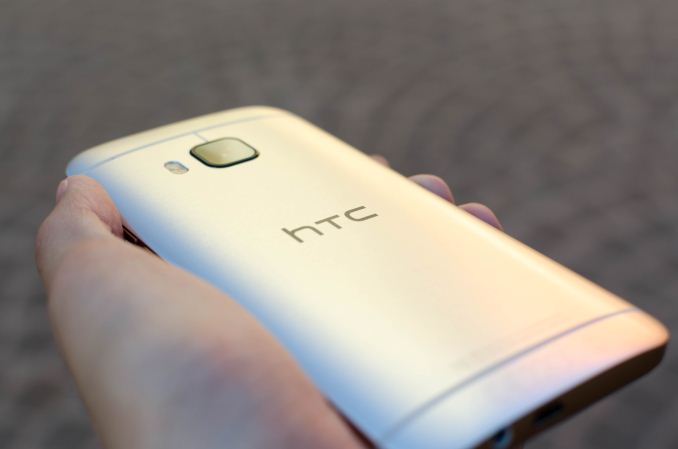 A good amount of time ago, we posted part one of our HTC One M9 review, which gave a good idea of some critical aspects of the One M9’s performance and design. Unfortunately, due to HTC’s last minute software changes there was a need to redo some of our testing as the changes were quite significant for some key aspects of the user experience, which were effectively any situation where the SoC was in a thermally throttled situation and overall camera performance. I’ve finally finished redoing our testing of the One M9, so we can finish the review and get the full picture of the One M9’s performance. Normally, we’d start by discussing the design of the phone, but much of the review has already been finished with part one. Instead, we’ll start with sustained battery life tests.

As previously detailed, our sustained battery life tests either strongly stress the CPU or GPU. For our GPU tests, we use GFXBench 3.0’s sustained GPU test, which runs the T-Rex benchmark on the display at its native resolution for an infinite rundown test. We didn’t have the modified test to present for a comparison between the two software builds, but we can get a pretty good sense for the changes that have occurred for final shipping software. 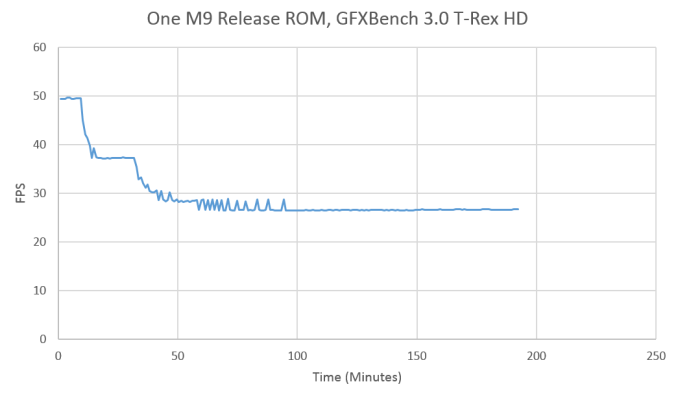 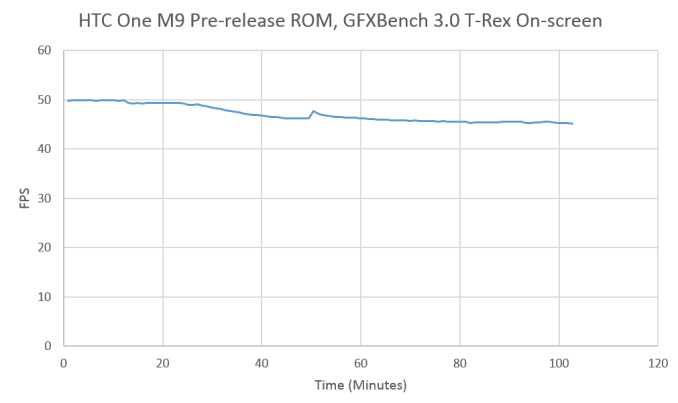 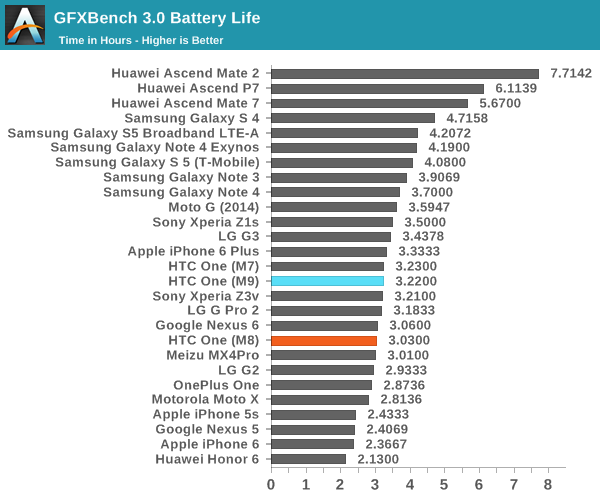 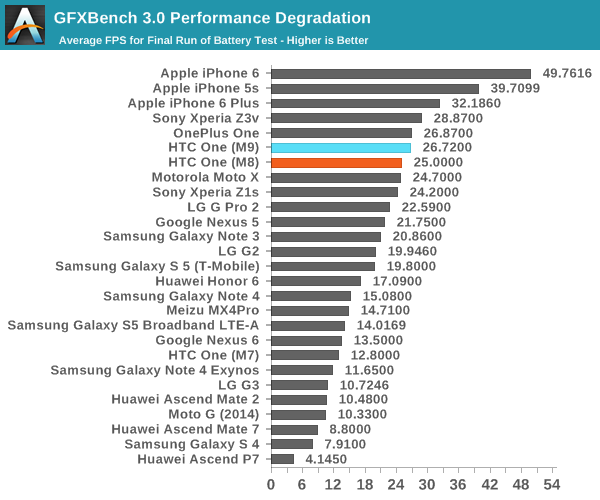 As one can see, the One M9 delivered somewhat impressive sustained performance with the pre-release build, but this resulted in almost dangerous skin temperatures and poor battery life on the order of 1.73 hours. The new update produced acceptable skin temperatures, but frame rate drops rather dramatically as skin temperature rises. The end performance actually ends up being quite similar to the One M8, but performance during the test is much higher than what we saw on the One M8. 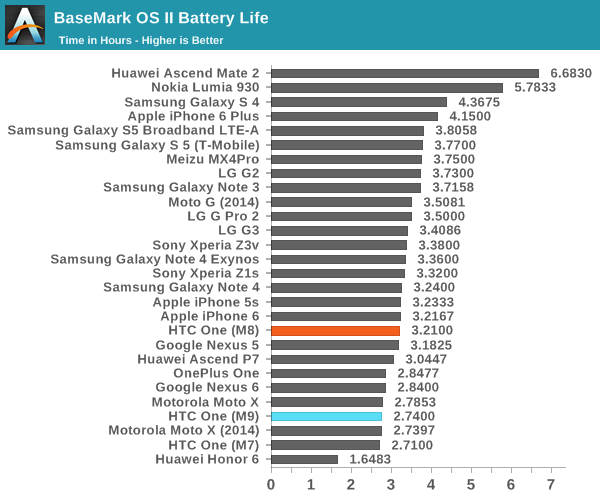 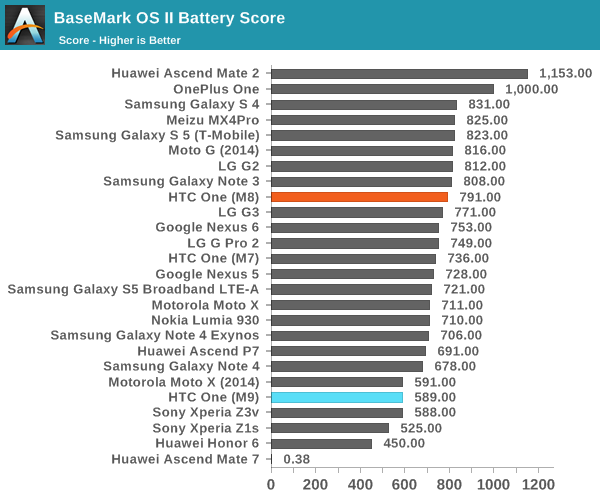 In the Basemark OS II test, we can see that the One M9 seems to perform poorly. One might be able to argue that the A57s provide more performance, but simple logging shows that past the first 20 minutes the A57 cluster is either shut down or throttled to the minimum clock state, although the A53 cluster manages to stay at 1.56 GHz for the duration of the test. For reference, the One M8 manages to keep the active CPUs at around 1.5 GHz throughout the test. 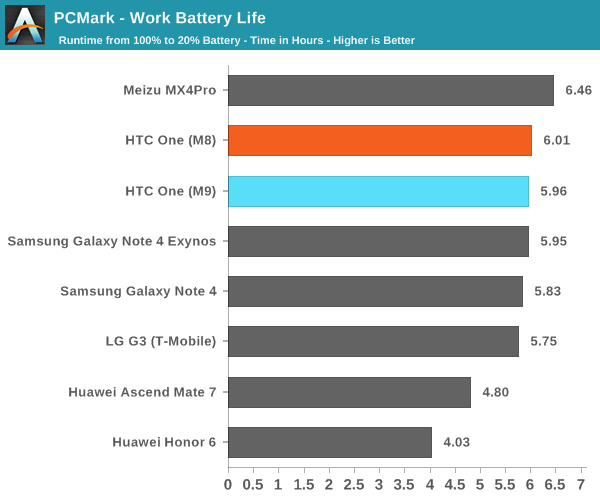 While Basemark OS II and GFXBench function as power virus tests, I wanted to get a good idea of performance somewhere between these rather extreme tests and the mostly display-bound web browsing test. To do this, I tested a few devices against PCMark’s work battery life benchmark, which shows that the One M9 seems to perform comparably when compared against the One M8. There is a noticeable difference in performance, but the gap isn’t all that big when compared to the M8. More interestingly is that the battery temperature sensor (which isn't necessarily on the battery) gets noticeably higher than the M8, on the order of 5-10C higher.

It’s a bit frightening to see that the gap in performance that we saw with the web browsing test remain. The effects of panel-self refresh would be greatly reduced in these short-running tests, so the differences here are mostly due to the SoC. The level of throttling I’ve seen here is pretty much unprecedented, which doesn’t help with the issue. Overall, the performance of Snapdragon 810 here is bad enough that I would genuinely consider Snapdragon 805 to be an improvement. I can’t help but wonder if this was inevitable though, as leaked roadmaps in the past suggested that Snapdragon 810 would’ve been a very different SoC.