Moving on, we have Notes’ parent application, Mail. Mail’s suite of enhancements walk the line between new functionality just for OS X, and some functionality being brought over from its sibling over on iOS. 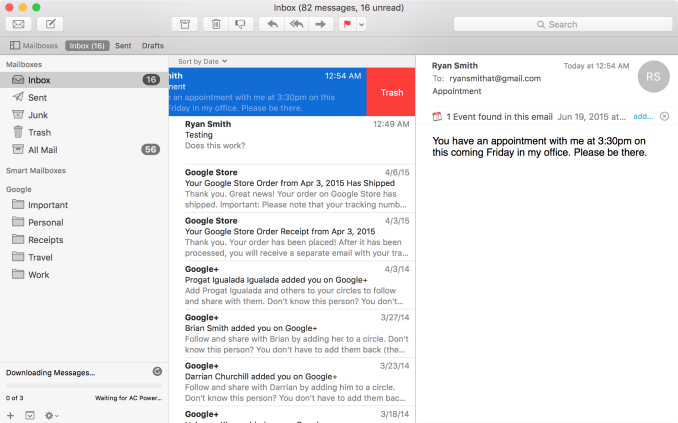 On the input side, Mail for OS X is learning some touch inputs from iOS Mail. Similar to iOS, you can now swipe on the trackpad to manage a message, trashing it, flagging it, etc. This swipe functionality operates a bit differently than on iOS, owing to the fact that the trackpad is an indirect device as opposed to a direct device, so certain actions require larger gestures and/or come with confirmations that the direct-contact iPhone and iPad can more safely avoid.

Apple has also done quite a bit on the interface side, giving Mail a bunch of new functionality in full screen mode. Full screen mode is now a windowed environment onto itself; mail can be opened up into its own tethered window, and minimized to a bar on the bottom of the screen. Mail composition gains the same abilities and more, as not only can mail be composed in a tethered window, but mail composition can be tabbed as well, allowing for several messages to be composed at once all within the full-screen environment. 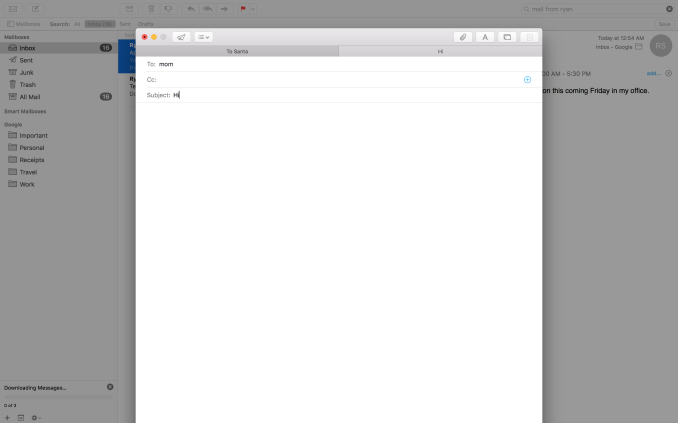 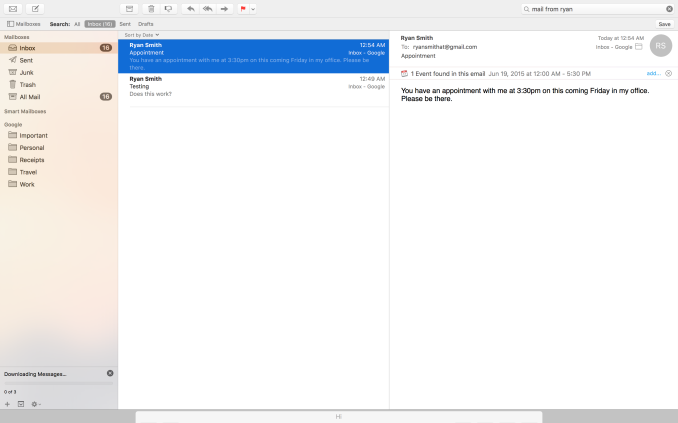 To be honest the full screen changes caught me off-guard at first, if only because it seems to be such an odd place to focus. I’m curious how many of our readers regularly use Mail in full screen mode, as this is a rather application-specific change. Within the context of Mail being a full screen application the windowing changes make a ton of sense, allowing Mail to be far more usable in full screen mode. But then OS X was already a windowed operating system. I am either greatly underestimating the number of people using Mail in full screen, or perhaps Apple wants to test the waters for the kind of features that would be useful in a smaller device without full windowing features, like the iPad. 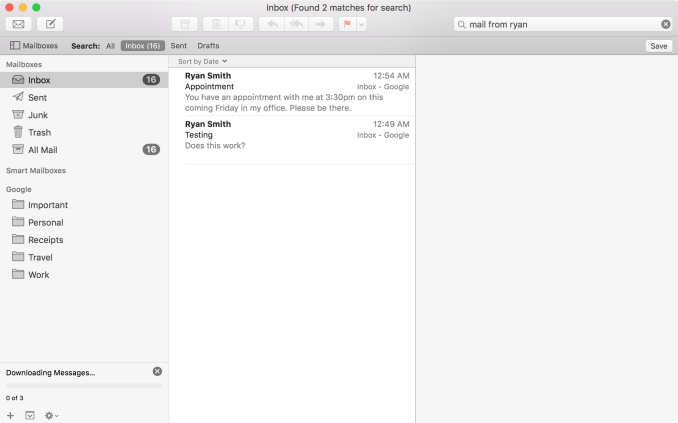 Interface changes aside, another improvement found in Mail for El Capitan is that Mail is much more contextually aware than it used to be. Apple has taught it to recognize new types of data, including other names and dates/appointments, so that this information can be fed into Contacts, Calendaring, etc. However on a broader level, Mail now also understands natural language search to an extent. Asking it to show emails from a certain person for example will do just that. Power users will already understand search queries and be able to more finely craft them – so specialized queries aren’t going anywhere – but for more basic users natural language search offers a new and potentially more intuitive manner of instructing Mail on what to search for.

Finally, under the hood Apple has been making some tweaks to the IMAP engine for Mail. Overall Apple is claiming an up-to-2x performance improvement in IMAP performance, and at the same time Apple has changed the order that IMAP messages are imported in so that the newest messages are downloaded first. We’ll have to see just what IMAP performance is like once El Capitan is out of beta, though changing the download order is a very straightforward and useful alteration to how the application works.

The final application seeing a major facelift is Photos. Now up to version 1.1, Photos incorporates several improvements. Lower key improvements include a number of usability enhancements. Photos can now batch edit image titles, sort album art, and add/edit location data in images. Meanwhile Apple has added an interesting new face detection feature simply called Faces, which allows for photos to be organized by the faces in them (and on a side note, I’m curious whether this is GPU-accelerated). I haven’t had too much of a chance to play with Faces in such a short period of time, but it has done a fairly good job of picking up on faces even in photos where those aren’t the primary subject. 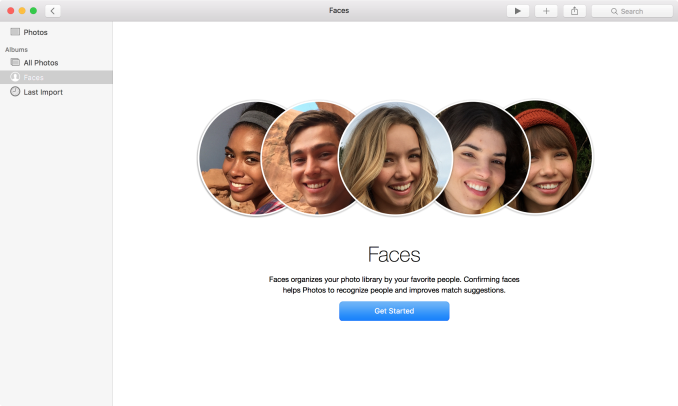 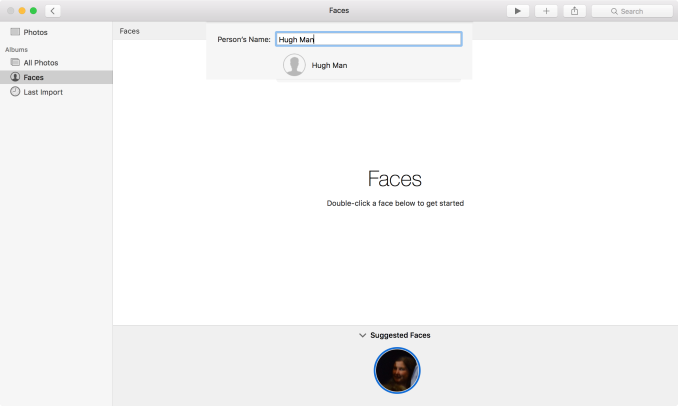 The bigger news here – and unfortunately not fully enabled in the developer preview – is support for extensions. Taking a page from Safari, Apple will allow developers to create editing extensions for Photos and then distribute them through the Mac App Store or bundled with their own applications. Editing extensions in turn can be used to add new editing or filtering effects to Photos’ editing capabilities, allowing for greater editing capabilities than what is currently built into the application.

As it stands there aren’t any extensions available yet – developers just got started – so we haven’t been able to try out the feature. However it’s clear that Apple is envisioning an opportunity for commercial use of this feature, especially given the distribution through the Mac App Store. Photos meanwhile has a decent but rather limited selection of editing capabilities, so the path for 3rd party developers to add more high-end abilities is a fairly obvious one. 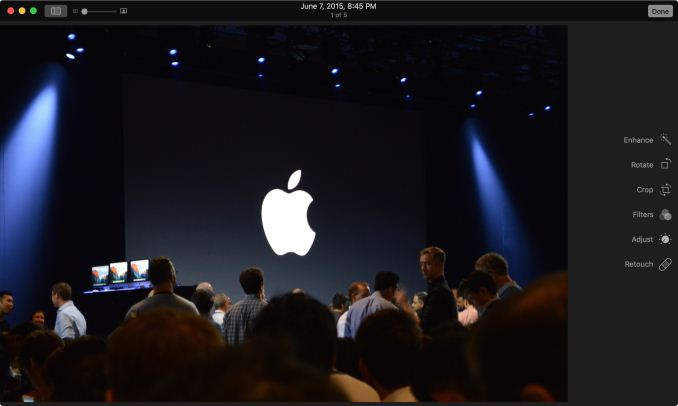 Last, but not least, Apple has been working on the performance of Photos as well. Launching Photos with very large photo libraries have been less than snappy on Photos on Yosemite, and Apple tells us they have addressed this on El Capitan. Their own internal benchmarks are showing a performance improvement upwards of 40% on a MacBook Pro.