Today HTC has taken the wraps off of the second generation version of the HTC Vive. As you probably know, the HTC Vive is a virtual reality head-mounted display designed and made jointly by HTC and Valve. The consumer launch date for the Vive Pre has been pushed back a couple times now, but certain developers have had access to developer versions of the headset for some time now in order to develop new titles for it or work on adapting existing ones. The new Vive Pre is the second version of the Vive developer kit, and it comes with a number of improvements that bring the Vive closer toward its eventual commercial launch which will be occurring this year.

The Vive Pre makes some notable additions to the earlier version. First and foremost are the improvements to ergonomics. According to HTC, the headset has basically been redesigned from the ground up to be more compact and fit more comfortably onto your head while also being more stable. The displays have been made brighter and refinements to the entire display and lens stack have improved clarity over the existing model. Finally, there has been a front camera added to the headset. This may seem strange at first, but what the camera allows for is augmented reality experiences where a feed of the real world can be shown to the user and illusions can be projected onto that space by the headset. 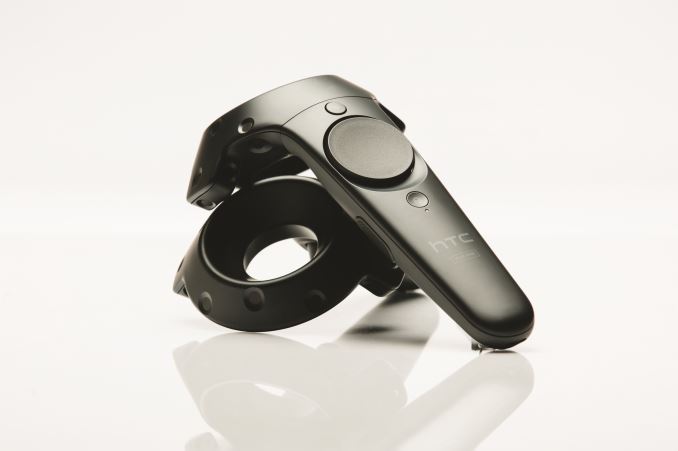 As for the controllers, the design has been overhauled to make them more ergonomic. The buttons have been textured to make them easier to find, and the trigger has been changed to a dual stage switch which allows for interactions with multiple states, such as holding or squeezing something. There's also haptic feedback to go along with interactions, and this is something that can really help the experience when implemented in a proper and subtle manner. Finally, the tracking stations for the controllers have been made smaller and more precise.

I had a chance to try the new Vive Pre earlier, and it marked my first experience with a virtual reality headset, with the exception of the Nintendo Virtual Boy. While I can't make any statements that compare the new Vive to the old dev kit or to other VR headsets like the Oculus Rift, I can say that the experience with the headset and the controllers was unlike anything I've experienced before. The demo consisted of a virtual environment that simulated some of the challenges one would encounter when climbing Mount Everest. It included very theatrical sweeping shots where you looked over the mountains as though you were flying in the air or riding on a helicopter, as well as interactive segments that simulated crossing over a large pit, and climbing up a ladder.

What amazed me was how quickly I forgot about the fact that I was just in a hotel room wearing a rather large helmet and holding some controllers, and I found myself too frightened to look right over the edge of a cliff, and felt a strange feeling when I climbed the ladder as though I was nervous with my increasing height, even though I knew very well that I was standing on the floor the entire time. Head tracking latency was also very low, and to be honest the only thing that ever took me out of the experience was the limited resolution of the displays. That's a technology issue that will be improved with time, but even with that barrier to total immersion the experience is still extremely compelling and unlike anything else.

As of right now, the HTC Vive is scheduled to launch commercially in April of this year. Whether or not that date will be pushed back again is unknown, but what I can say is that I think the Vive and other VR headsets will have been worth the wait.