The ASUS Prime X299-Deluxe Motherboard Review: Onboard OLED and WiGig

The ASUS Prime X299-Deluxe doesn't jump out with fancy styling and a glut of RGB LEDs - the design is meant to be professional and muted. A bit. The black PCB has a couple of white line patterns around the socket matching the cut and direction of the chipset and VRM heatsinks, while the chipset heatsink design extends itself between the top full-length PCIe slot and the socket to house an OLED display. The chipset heatsink is extended at the bottom as well, as it sticks out between the last two full-length slots - this is intended to cool a M.2 module below it.

Even through there isn't a glut of RGB LEDs, there still is a few: tastefully implemented and hidden behind the back panel IO shroud under a mirror-like surface. The other integrated strip is located on chipset heatsink in the same manner under another reflective surface. Once the RGB LEDs are on, the surface becomes transparent with the RGB LED color visible. If needed, additional RGB LED support can be found using the addressable header on the bottom of the board, or a second header at the top of the board next to the CPU fan headers. These headers support 5050 RGB Multi-color LED strips (12V/G/R/B) with a maximum power rating of 2A (12V), no longer than 2m, allowing for a sizeable custom lightshow inside a case. The bottom of the board also has power/reset buttons, a debug LED, clear CMOS and the MemOK! button for easy access as well as the usual USB suspects. 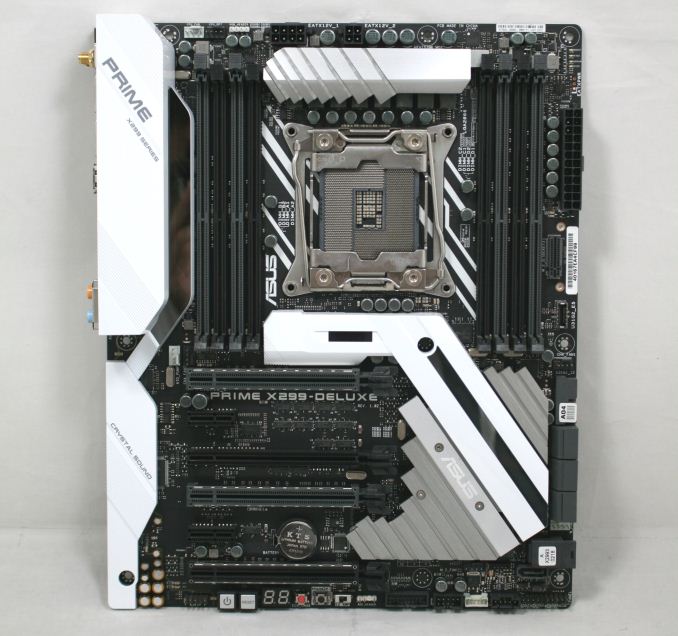 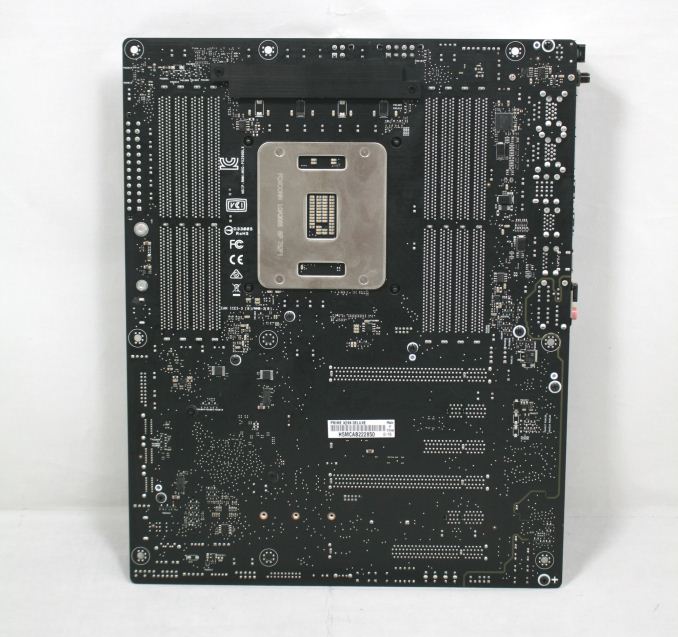 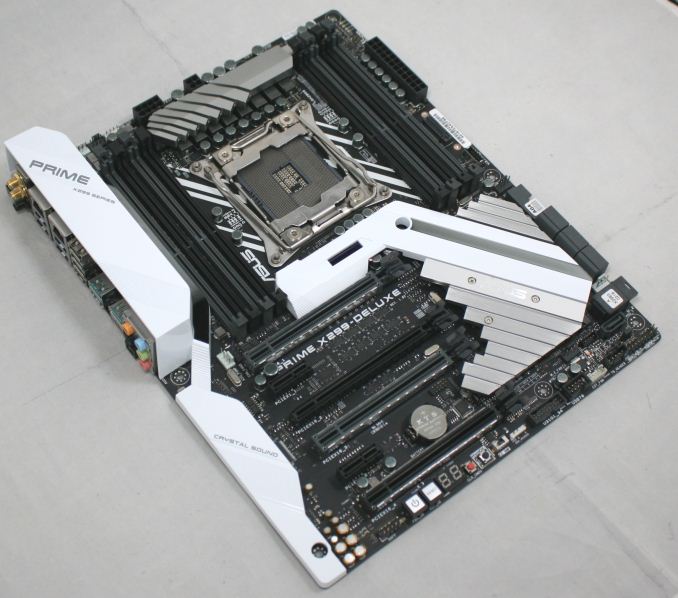 There are a total of seven fan headers on the board, with support for two high-power water cooling pumps. The first two CPU fan headers are located at the top of the board above the left set of memory slots. A chassis fan header is on the right side above the SATA ports, and the first water pump specific header (in white) sits below the SATA ports. Just below the chipset heatsink is another fan header, while the left side of the board (below the left DRAM slots) give the AIO pump header and second chassis fan header. All onboard headers are able to use both PWM and DC controlled fans. If seven integrated headers are not enough, the board includes a fan controller in the box with a custom connection to the motherboard. 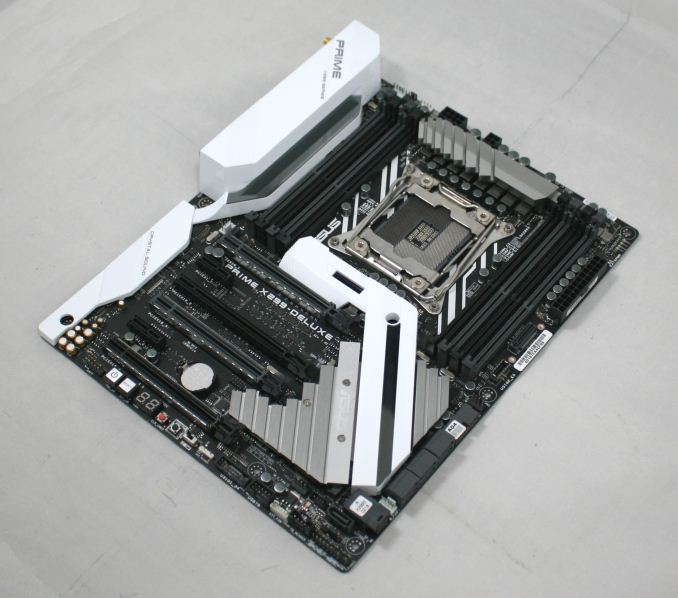 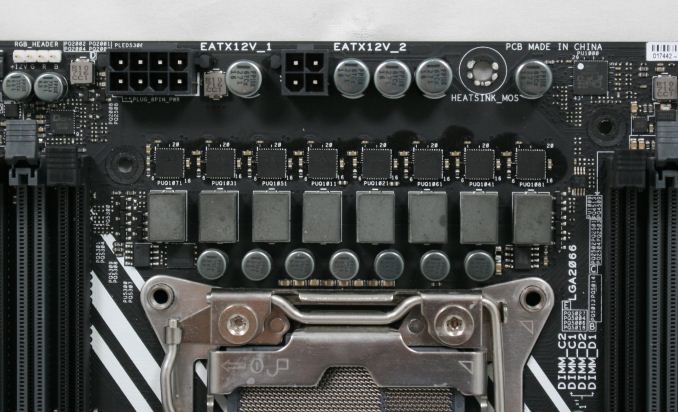 The eight DRAM slots alternate in a grey and black color scheme matching the black board. The slots use a single sided locking mechanism and do not contain slot reinforcement, as seen with some other high-end motherboards. Memory compatibility is up to DDR4-4133 for both quad channel (Skylake-X) and dual-channel (Kaby Lake-X) processors, with support up to 128GB and 64GB respectively. Other items of note on the top half are the basic debug LEDs for Boot, VGA, DRAM, and CPU for troubleshooting during POST. 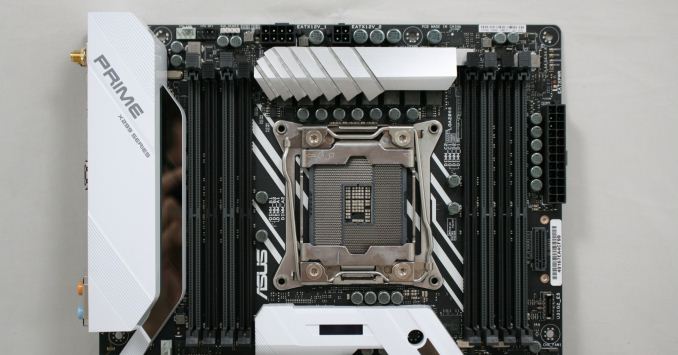 The other notable thing is the OLED screen located just below the socket. This screen, upon boot, cycles through POST codes, eventually displaying the CPU temperature. The OLED is customizable using the LiveDash software to show other temperatures, fan speeds, and voltages. The full display is 128x32 pixels, and the software at this point should allow a custom monochrome image or gif to be displayed.

The right-hand side of the board has most of the attached storage, with the U.2 port at the bottom and seven total SATA ports with two fan headers and a USB 3.0 header. Next to this is a front panel USB 3.1 header and the vertical M.2 slot. Next to it is the 24-pin ATX connector and a closer shot of the debug LEDs.

In a slightly out of the normal situation, there are a total of seven SATA ports found on the Prime X299-Deluxe. Six of them are situated in a top/bottom configuration, with the seventh port coming out of the board, behind the U.2 port, and oriented vertically.

For storage, it pays to be aware that switching and sharing of the PCIe lanes occurs when using 28-lane and 16-lane CPUs. For example, the last full-length PCIe slot shares bandwidth with SATA ports 5/6 with 28/16 lane CPUs. The second (vertical) M.2 socket shares bandwidth the U.2 port. If an M.2 device is installed in this second port, the U.2 port is disabled unless otherwise set in the BIOS.

The bottom portion of the board has several buttons and additional connectivity. From left to right: 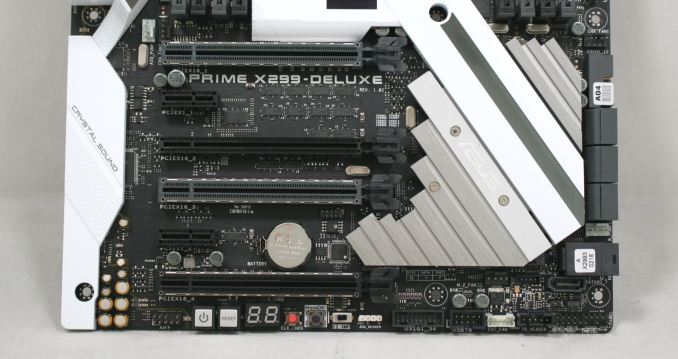 Below is a simplified list of how the PCIe slots will work with each family of CPUs (talking PCIe lanes) when multiple cards are used (the "@" symbol is used to show slot preference for the configuration). PCIe slot numbers are referred to by top-down. In other words, PCIe 1 is the first slot, PCIe 2 below it, and so on:

It should be noted that when using 28-lane processors (7800X, 7820X), three-way SLI or Crossfire configurations are not supported due to the way the PCIe lanes are arranged.

Like the SATA ports, some of the PCIe lanes share bandwidth without parts as well. For example, the PCIe 3.0 x4 slot (PCIe 2) shares bandwidth with the USB 3.1 front panel connector when using 16-lane CPUs.

The back panel IO consists of:

12 USB ports of any kind is a lot to have on the back panel with several more available through onboard headers.

The sample sent by ASUS was for the initial launch and arrived with a lot of the accessories missing, hence we do not have a picture, but do have a list of what it includes.