ASUS designed the ROG Zenith Extreme to be the most feature-packed AMD X399 motherboard for Ryzen Threadripper processors available. The company's engineers had to use an E-ATX motherboard layout to fit everything and even that was not enough, as they were forced to move two of the M.2 slots to a vertical daughterboard and reduce the SATA ports to six. Despite these sacrifices, the ASUS X399 ROG Zenith Extreme is the most feature-packed motherboard that we have reviewed to this date. 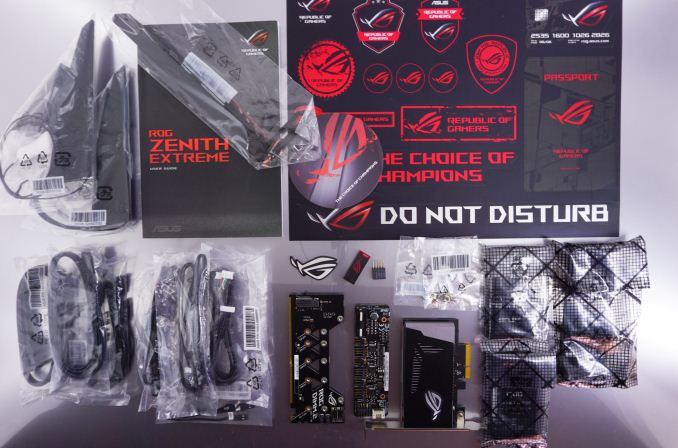 The bundle of the ASUS X399 ROG Zenith Extreme is rich, as expected from a motherboard of this class. Besides the standard manual and a lot of stickers/cosmetic items that include even a (cardboard) drink coaster, we also found three SLI/Crossfire bridges for any possible (2-way, 3-way, or 4-way) SLI/Crossfire configuration, extension cables for RGB LED strips, a metallic support for PCIe cards, and antennas for the Wi-Fi/Bluetooth/WiGig interfaces. ASUS supplies the drivers and software into a USB flash disk instead of an optical disk, which is a reasonable move nowadays that many users are not using optical drives at all. Furthermore, ASUS supplies a "fan extension card" that adds another three fan headers if the six onboard headers are not enough for someone, plus three thermocouples that can be placed anywhere.

The ROG AREION 10G PCIe ×4 card is an interesting part of the bundle. Although it is based on the well-known AQUANTIA AQC107 chipset that other manufacturers are using as well, the PCIe card has a very large heatsink attached to it. Besides the AQC107 chipset, we only found a couple of clock generators and passive components on the AREION 10G card, components that do not warrant any kind of cooling. The AQC107 chipset on other motherboards that we have previously reviewed never had any additional cooling. We are unsure what drove ASUS's engineers to install a heatsink on the AREION 10G card, especially such a hefty one that is enough to keep cool a low-power CPU.

Despite the otherwise overwhelming bundle, ASUS does not supply any cable straps and only three SATA cables are included. There is no I/O shield pictured because it is permanently attached to the motherboard itself.