Having covered the front-end and middle-core, we move onto the back-end of the Cortex-A77 and investigate what kind of changes Arm has made to the execution units and data pipelines. 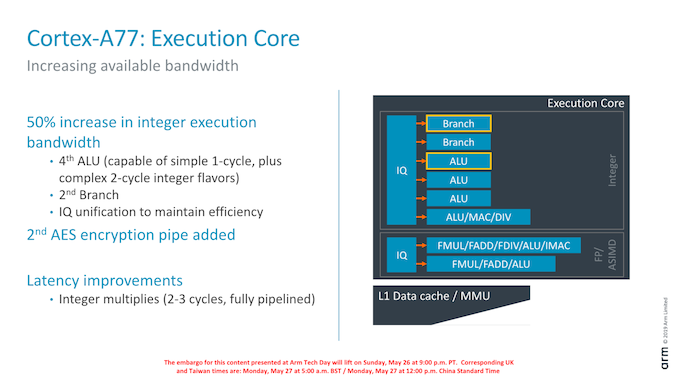 On the integer execution side of the core we’ve seen the addition of a second branch port, which goes along with the doubling of the branch-predictor bandwidth of the front-end.

We also see the addition on an additional integer ALU. This new unit goes half-way between a simple single-cycle ALU and the existing complex ALU pipeline: It naturally still has the ability of single-cycle ALU operations but also is able to support the more complex 2-cycle operations (Some shift combination instructions, logical instructions, move instructions, test/compare instructions). Arm says that the addition of this new pipeline saw a surprising amount of performance uplift: As the core gets wider, the back-end can become a bottleneck and this was a case of the execution units needing to grow along with the rest of the core.

A larger change in the execution core was the unification of the issue queues. Arm explains that this was done in order to maintain efficiency of the core with the added execution ports.

Finally, existing execution pipelines haven’t seen much changes. One latency improvement was the pipelining of the integer multiply unit on the complex ALU which allows it to achieve 2-3 cycle multiplications as opposed to 4.

Oddly enough, Arm didn’t make much mention of the floating-point / ASIMD pipelines for the Cortex-A77. Here it seems the A76’s “state-of-the-art” design was good enough for them to focus the efforts elsewhere on the core for this generation. 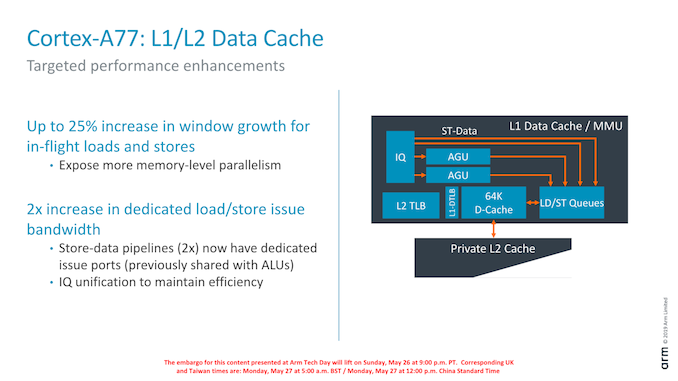 On the part of the load/store units, we still find two units, however Arm has added two additional dedicated store ports to the units, which in effect doubles the issue bandwidth. In effect this means the L/S units are 4-wide with 2 address generation µOps and 2 store data µOps.

The issue queues themselves again have been unified and Arm has increased the capacity by 25% in order to expose more memory-level parallelism. 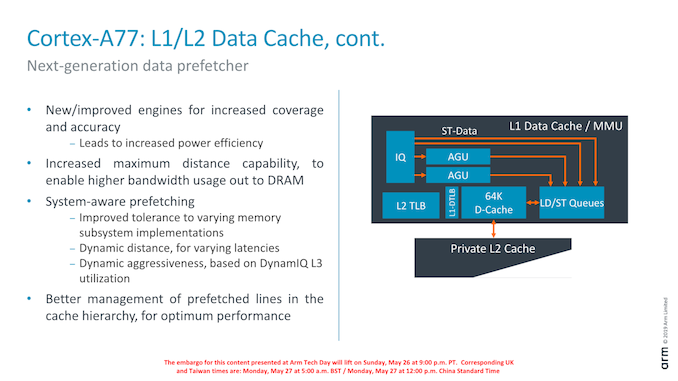 Data prefetching is incredibly important in order to hide memory latency of a system: Shaving off cycles by avoiding to having to wait for data can be a big performance boost. I tried to cover the Cortex-A76’s new prefetchers and contrast it against other CPUs in the industry in our review of the Galaxy S10. What stood out for Arm is that the A76’s new prefetchers were outstandingly performant and were able to deal with some very complex patterns. In fact the A76 did far better than any other tested microarchitecture, which is quite a feat.

For the A77, Arm improved the prefetchers and added in even new additional prefetching engines to improve this even further. Arm is quite tight-lipped about the details here, but we’re promised increased pattern coverages and better prefetching accuracy. One such change is claimed to be “increased maximum distance”, which means the prefetchers will recognize repeated access patterns over larger virtual memory distances.

One new functional addition in the A77 is so called “system-aware prefetching”. Here Arm is trying to solve the issue of having to use a single IP in loads of different systems; some systems might have better or worse memory characteristics such as latency than others. In order to deal with this variance between memory subsystems, the new prefetchers will change the behaviour and aggressiveness based on how the current system is behaving.

A thought of mine would be that this could signify some interesting performance improvements under some DVFS conditions – where the prefetchers will alter their behaviour based on the current memory frequency.

Another aspect of this new system-awareness is more knowledge of the cache pressure of the DSU’s L3 cache. In case that other CPU cores would be highly active, the core’s prefetchers would see this and scale down its aggressiveness in order to possibly avoid thrashing the shared cache needlessly, increasing overall system performance.