As I mentioned earlier in the article, while AMD does have a reference card, they aren’t going to be releasing it to retail. So instead, today’s launch is all about partner cards. To that end, AMD has sampled us with both the 8GB and 4GB versions of Sapphire’s Pulse RX 5500 XT. Sapphire’s card is a pretty good example of what to expect for basic (at-MSRP) RX 5500 XT cards, offering a solid build quality, but otherwise being pretty close to reference specifications.

Sapphire has several sub-brands of cards, including the Nitro and the Pulse. Whereas the former are their higher-priced factory overclocked cards, the Pulse cards are more straightforward. For their RX 5500 XT cards, Sapphire does ship them with a higher than reference GPU power limit – leading to a 20MHz higher game clock rating – but the actual GPU base and boost clockspeeds remain unchanged. This goes for both the 4GB and 8GB cards, which aside from their memory capacities are identical in both build and specifications. 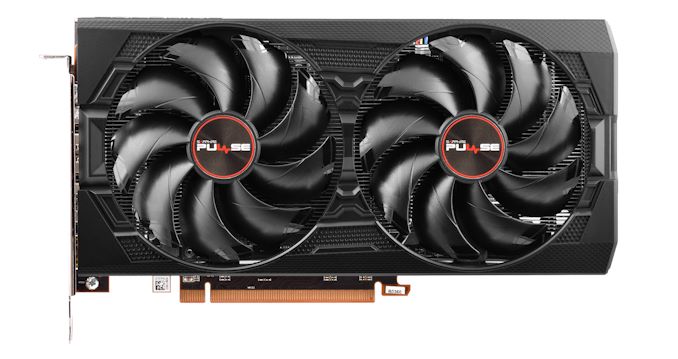 At a high level, the Sapphire Pulse RX 5500 XT is a pretty typical design for a 150 Watt(ish) card. Sapphire has gone with a dual slot, dual fan open air cooled design, which is more than enough to keep up with Navi 14.

In fact, once we break out the rulers and really dig into the Sapphire Pulse, it becomes increasingly clear that Sapphire may have very well overbuilt the card. The card’s cooling system and shroud is longer than the PCB itself – it’s the board that’s bolted to the cooler, and not the other way around. Similarly, Sapphire has gone for a taller than normal design as well, allowing them to fit a larger heatsink and fans than we’d otherwise see with cards that are built exactly to PCIe spec. The resulting card is quite sizable, measuring about 9.15-inches long, and 4.25-inches from the bottom of the PCB to the top of the shroud.

The payoff for this oversized design is that Sapphire can use larger, lower RPM fans to minimize the fan noise. The Pulse 5500 XT packs 2 95mm fans, which in our testing never got past 1100 RPM. And even then, the card supports zero fan speed idle, so the fans aren’t even on until the card is running a real workload and starts warming up. The net result is that the already quiet card is completely silent when it’s idling.

Meanwhile beneath the fans is a similarly oversized heatsink, which runs basically the entire length and height of the board. A trio of heatpipes runs from the core to various points on the heatsink, helping to draw heat away from the GPU and thermal pad-attached GDDR6 memory. The fins are arranged horizontally, so the card tends to push air out via its I/O bracket as well as towards the front of a system. The card also comes with a metal backplate – no doubt needed to hold the oversized cooler together – with some venting that allows air to flow through the heatsink and out the back of the card. 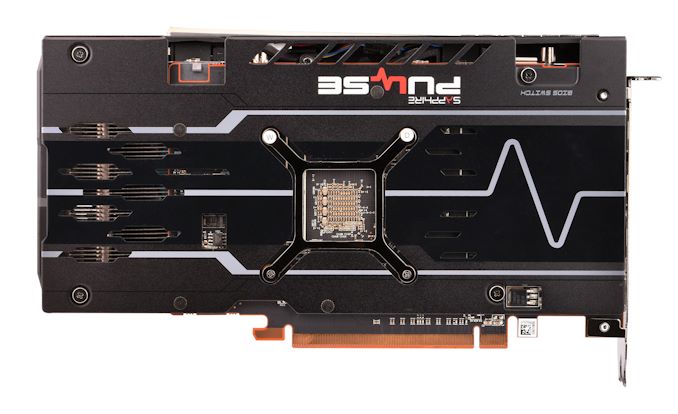 Overall, Sapphire offers two BIOSes for the card, which are selectable via a switch on the top. The default BIOS is Sapphire’s performance BIOS, which has the GPU power limit increased to 135 Watts. As we’ll see in our benchmarks, the net performance impact of this is not very substantial, but it does allow the card to average slightly higher clockspeeds. Meanwhile the second BIOS is rigged for quiet operation, bringing the card back down to a GPU power limit of 120W.

Speaking of power, the card relies on an 8-pin external PCIe power cable as well as PCIe slot power for its electricity needs. From a practical perspective this seems overprovisioned for a card that shouldn’t pass 150W for the entire board – so a 6 pin connector should work just fine here – but with Sapphire’s higher power limit bringing the card right up to that 150W threshold, I’m not surprised to see them playing it safe.

While we're on the subject of PCIe, it’s worth mentioning quickly that while the Sapphire Pulse is physically a PCIe x16 card, electrically it’s only a x8 card. A traditional cost-optimization move for AMD, they have only given the underlying Navi 14 GPU 8 PCIe lanes, so while the card uses a full length x16 connector, it only actually has 8 lanes to work with. This won’t present a performance problem for the card on PCIe 3.0 systems, and better still as Navi offers PCIe 4.0 connectivity, it means those 8 lanes are twice as fast when paired with a PCIe 4.0 host – where coincidentally enough, AMD’s Ryzen processors are the only game in town right now. 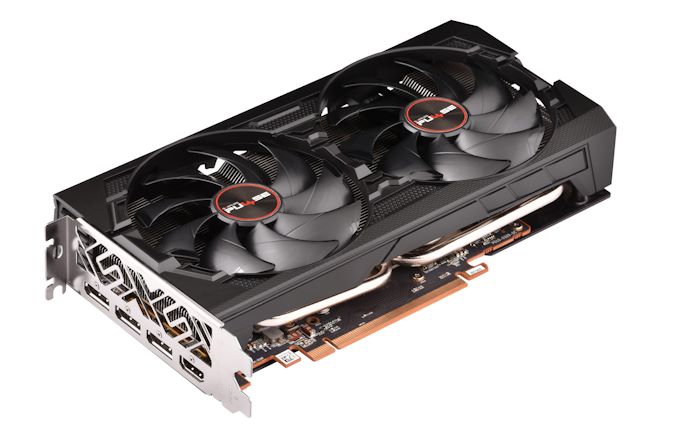 Finally for hardware features, for display I/O we’re looking at a pretty typical quad port setup. Sapphire has equipped the card with 3x DisplayPort 1.4 outputs, as well as an HDMI 2.0b output. With daisy chaining or MST splitters, it’s possible to drive up to 5 monitors from the card. 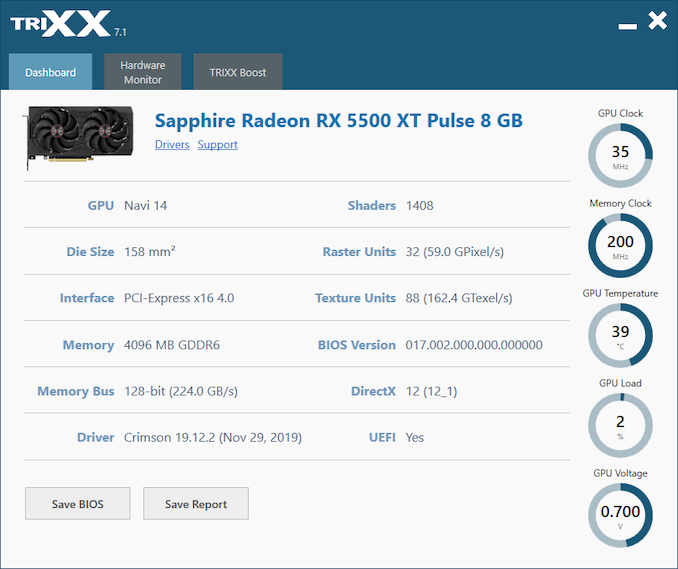 As for software, Sapphire ships their cards with their TriXX monitoring and overclocking software. It’s been some number of years since we’ve last taken a look at TriXX, and while the basic functionality has remained largely unchanged, the most recent iteration of the software comes with a very streamlined and functional UI. Overall as far as overclocking goes, TriXX ultimately just hooks into AMD’s drivers, so while it’s capable, it’s no more capable than AMD’s constantly improving Radeon Software.

The one area where Sapphire is still able to stand apart from AMD, however, is with their TriXX Boost feature. Not to be confused with the somewhat similar Radeon Boost feature in AMD’s drivers, TriXX Boost is Sapphire’s take on resolution scaling. The software combines custom resolution creation with GPU resolution scaling controls, essentially allowing a user to create a lower resolution and engage GPU resolution scaling all in a single go. The basic idea being to make it super easy to create a slightly lower resolution (.e.g. 1632x918) for better performance, and then having the GPU scale it back up to the full resolution of the monitor. The impact on image quality is as expected, and while it’s nothing that can’t technically already be done with AMD’s software, Sapphire has put a nice UI in front of it. 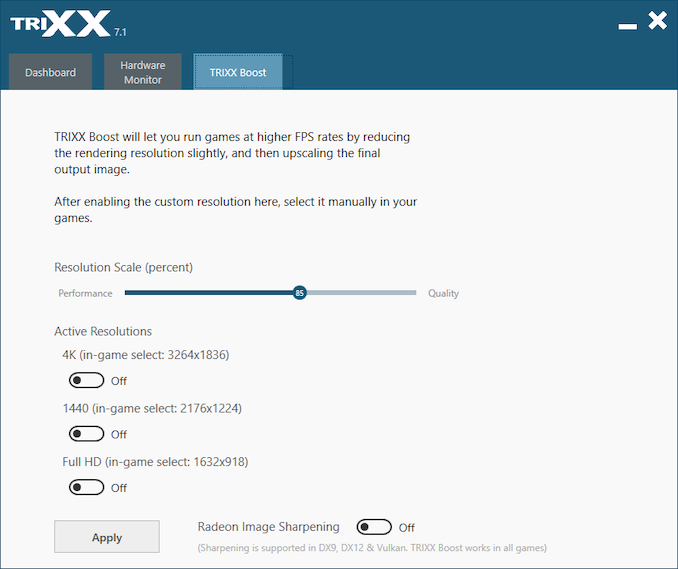