On The Wings of an Eagle: GIGABYTE's X570 I Aorus Pro WIFI Motherboard Tested

GIGABYTE's firmware features two primary modes, basic and advanced. Even from the GIGABYTE X570 Aorus Xtreme model which is its flagship X570 board, the firmware throughout the range seems consistent. The GUI of the firmware consists of a black background, orange highlights and white text. 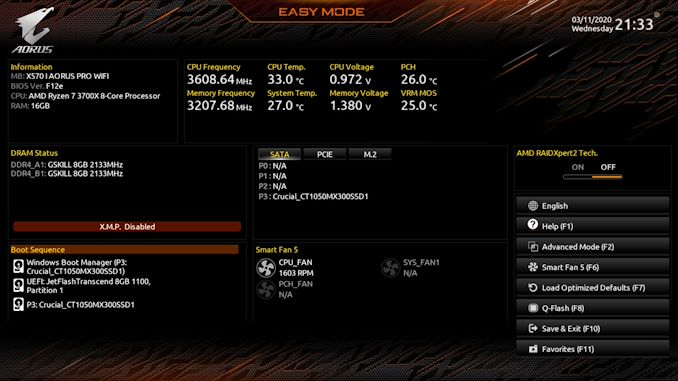 Along the top of the advanced mode is five primary menus including Tweaker, Settings, System Info, Boot, and Save & Exit. The GIGABYTE Aorus BIOS also includes the Smart Fan 5 utility which allows users to create custom fan profiles for the two 4-pin headers onboard, with a Q-Flash utility to allow users to update the board's firmware.

The GIGABYTE Aorus firmware is easy to navigate, with a very basic array of menus and options for users to select from. The firmware itself is responsive and we didn't experience any instability or input lag. Users looking to overclock will find plenty of settings available for tweaking including CPU, power, voltage and memory-related settings. There aren't quite as many overclocking settings as models such as the MSI MEG X570 Godlike, especially in terms of memory latency settings, but the GIGABYTE Aorus firmware looks good and works well.

With many vendors starting to switch from including bundles of software utilities to condensing them into one primary package, GIGABYTE has opted to stick with its usual range of applications for the X570 series. All of the software applications operate around its GIGABYTE App Center utility, with this acting as a general hub not only for GIGABYTE applications but Windows and third-party applications too. 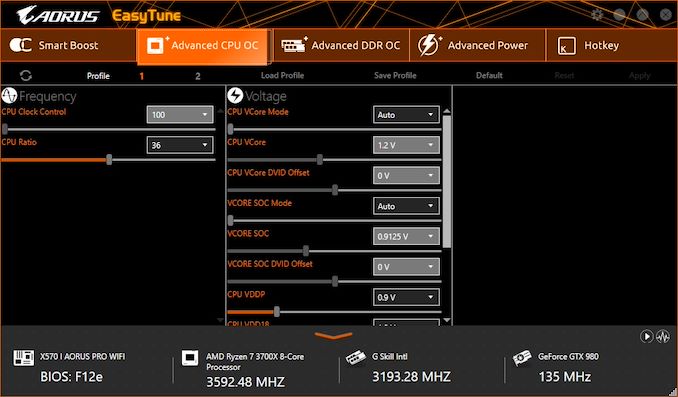 The stand-out applications available on the driver and software installation disc bundled with the X570 I Aorus Pro WIFI include the RGB Fusion 2.0 software, the EasyTune overclocking utility, and the @BIOS software.

GIGABYTE offers users plenty of avenues to update the board's firmware with the @BIOS software, as well as the Q-Flash button which allows users to update the BIOS without a CPU or memory installed in the box. This is a huge plus point for users offering multiple avenues to make system critical firmware updates. The RGB Fusion software gives users the ability to customize RGB LED lighting via a range of different lighting effects, while the EasyTune utility allows users to monitor the system and do overclocking within the software. It's not as extensive as AMD's Ryzen Master utility and doesn't offer as many options as the latter. For those looking to enhance the auditory experience with the integrated Realtek ALC1220 HD audio codec, users will need to download the Realtek Audio Control Center direct from the Microsoft store as only the core audio drivers are supplied on disc.