System performance of the ZenFone 7 Pro is quite a bit more straightforward than what we’ve seen last week on the ROG Phone III – the mainstream device lacks the more complicated performance modes that the gaming-oriented sibling exposes to its users. Instead, we’re seeing a relatively simplified choice in regards to refresh rates: 60 or 90Hz, and a “high performance” mode.

Unfortunately, this high-performance mode functions the same as the higher performance X-modes on the ROG Phone III in that it essentially just disables DVFS and just runs the SoC at maximum frequencies all the time. It’s not a mode that I would recommend anybody to run their phone on, unless you really don’t care at all about battery life. 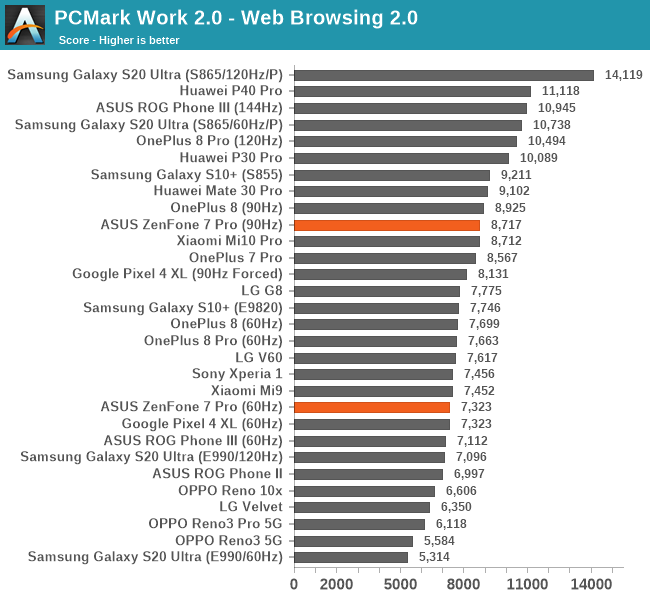 In PCMark’s web-browsing test the scores essentially line up with the refresh rate, and the ZenFone 7 Pro tracks the results of the ROG Phone III at 60Hz, and landing in-between at 90Hz. 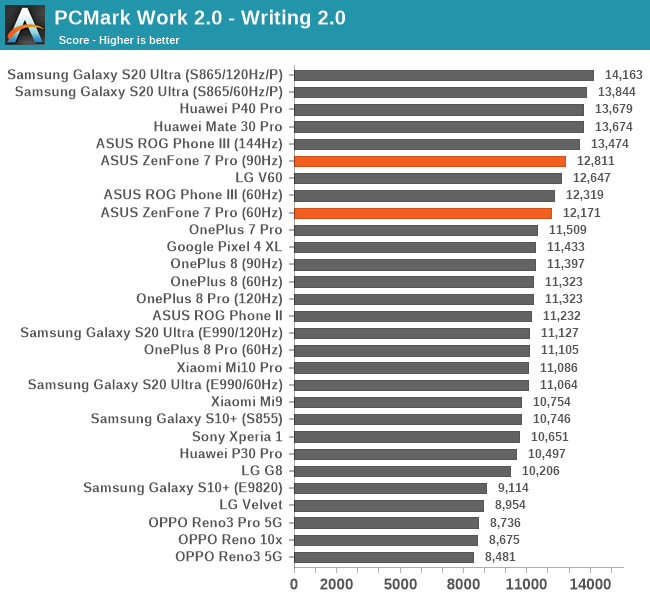 In the important writing test, the ZenFone also performed extremely well and represented amongst the better Snapdragon 865 devices. 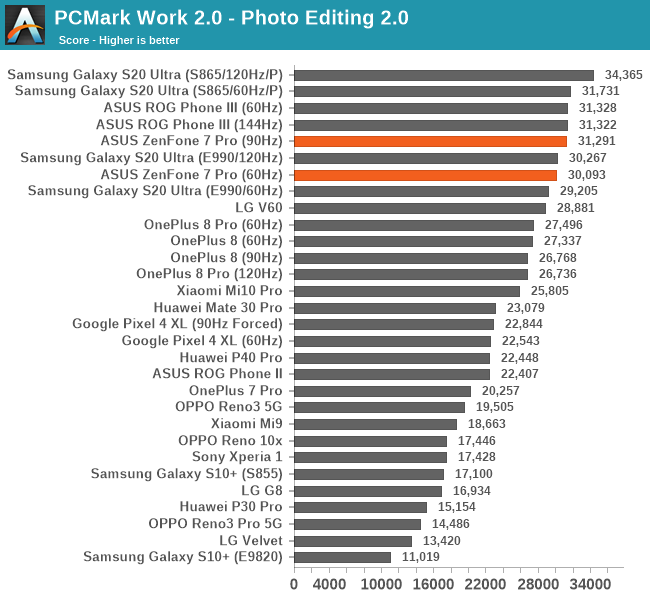 Photo editing is also performing excellently and again slightly ahead of some other S865 phones. 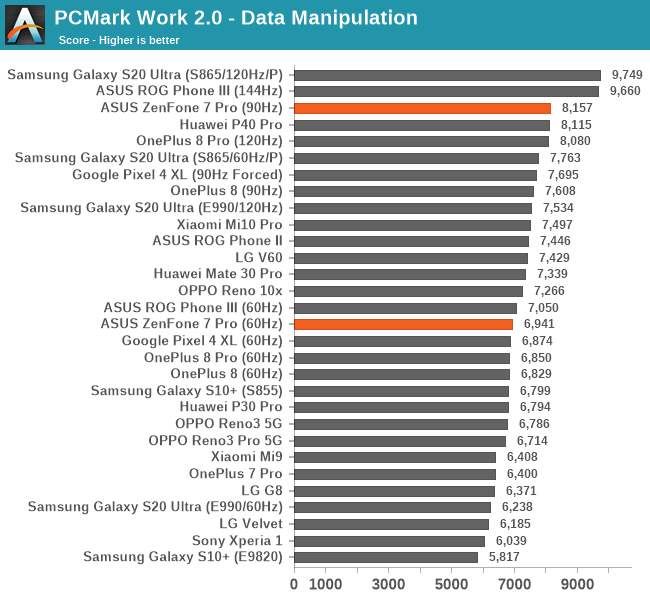 The data-manipulation scaled with the refresh rate bump so it means the ZenFone is able to render frames within the expected 12ms frame-time limit. 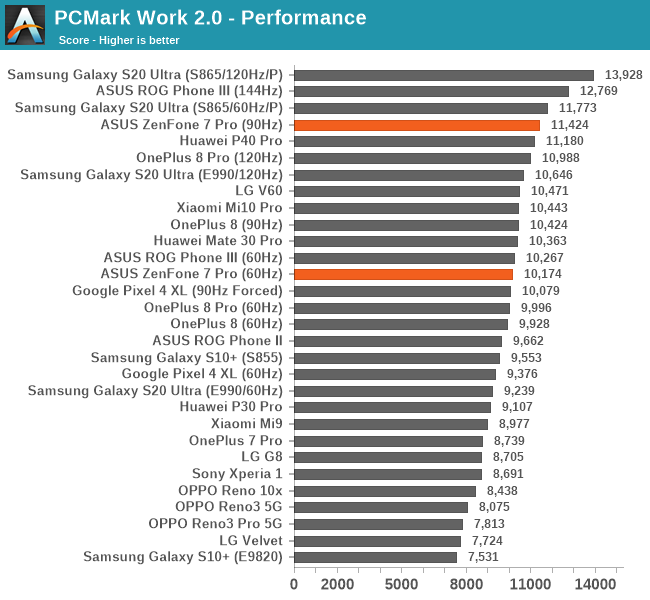 Overall, the ZenFone 7 Pro performed quite well in PCMark and there’s not much we can complain about in regards to its performance.

One thing I need to make note is that I’ve noticed that ASUS is doing some sort of benchmark detection on its phones. On both the ROG Phone III and this new ZenFone 7 Pro I’ve noted that the system detected PCMark. Unlike other detection mechanisms that raise performance in benchmarks, ASUS’s behaviour here seems to have been to force the 60Hz mode, even when 90Hz was enabled in the settings. Using an anonymised version of PCMark bypassed the detection and I was able to get the 90Hz scores and battery life tests. I’ve reached out to ASUS for comment on this, and I’ll update the matter when I hear back a response. 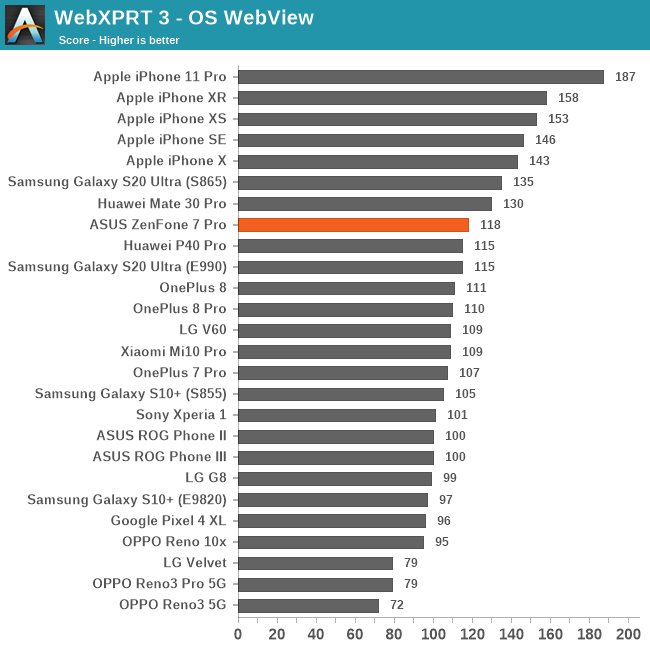 In WebXPRT3 the ZenFone 7 Pro performed significantly better than the ROG Phone III – I’m not sure what’s changed on the OS side of things but it looks like the ZenFone is slightly more aggressively tuned for performance by default. 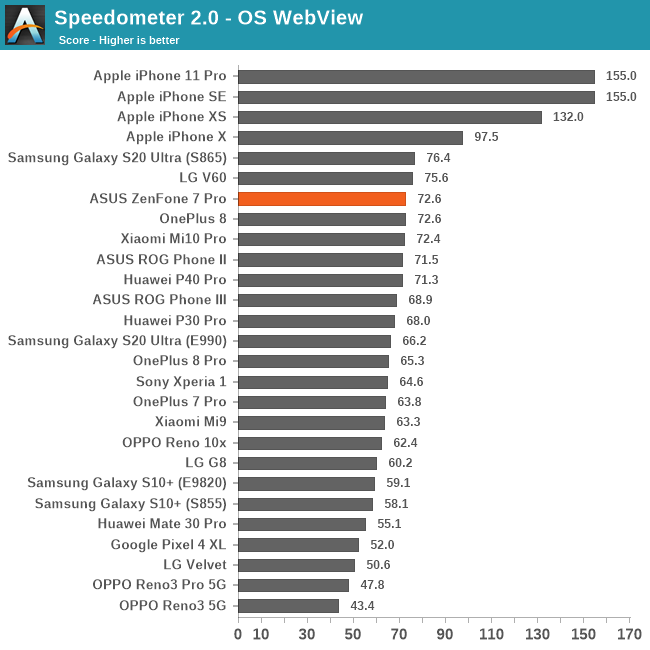 Speedometer 2.0 also doesn’t showcase the same performance oddities as seen on the ROG Phone III and we get top scores here. 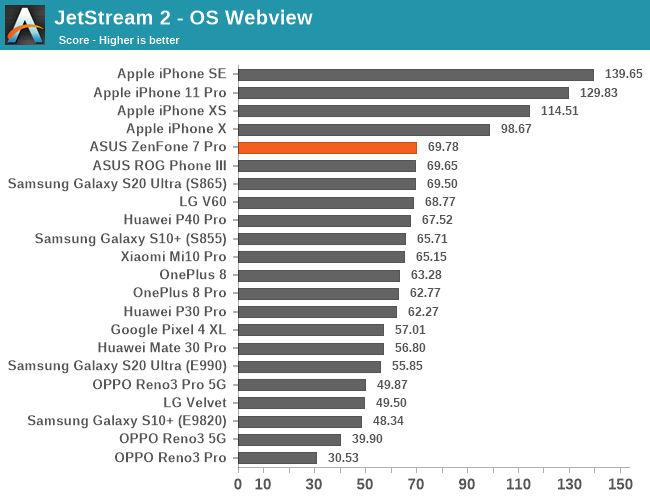 Similarly, JetStream 2 lands where we expect it to.

Overall, performance of the ZenFone 7 Pro is excellent and top-notch amongst current flagship devices. It doesn’t have the 120 or 144Hz refresh rate of some other phones in the market, but 90Hz already marks the biggest jump in user experience, and thanks to the 200Hz touch sampling rate it also gives the feel of an extremely responsive device.