The Xiaomi Mi 11 Ultra Review: Big and Fast, but Inefficient

When we reviewed the Mi 11 earlier in the year, that should have generally covered the performance evaluation for the Mi 11 Ultra as well as both devices are on the exact same hardware platform and also feature the same OS. However, since the Mi 11’s release, Xiaomi has released and pushed out an update to MIUI in the form of version 12.5 which has promised considerable improvements in terms of performance and responsiveness of the system.

On top of that, this spring, UL has released a new PCMark suite version 3.0 – while the workloads here are generally the same as that of version 2.0, the new application is built using the newest build tools and is now 64-bit capable. In past generation devices, the performance difference between 32-bit and 64-bit was relatively small, however recent generation Cortex CPU cores from Arm have had more stark feature discrepancies in regards to performance of AArch64 vs AArch32, favouring the former newer ISA as next year we expect 32-bit SoCs to be partially deprecated, and see a full shift to 64-bit only in 2023 devices. The new benchmark version here adapts to the shifting landscape, and more accurately represents the performance of today’s devices. 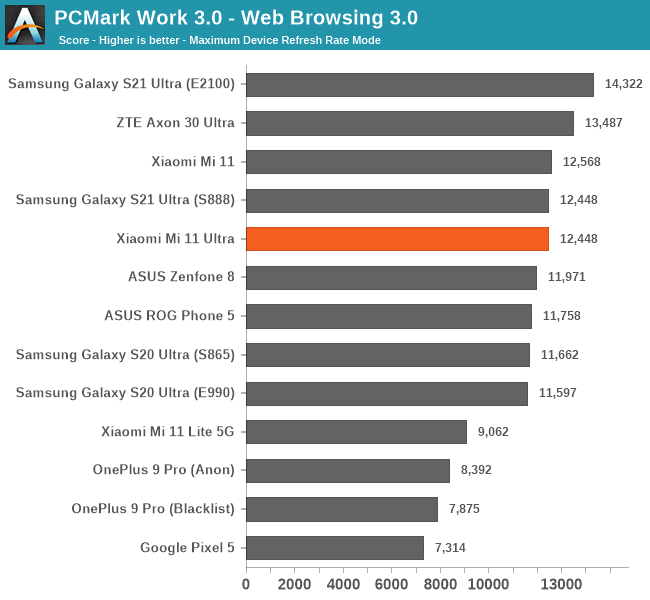 The web-browsing workload is sensible to frame-rate of the display, as well as how aggressive the scheduler and DVFS of the chips are. The Mi 11 Ultra here generally performs excellently as is in line with the Mi 11 and the Snapdragon 888 S21 Ultra. There’s a few devices which are a bit more aggressive but this also comes at a cost of more battery drain. 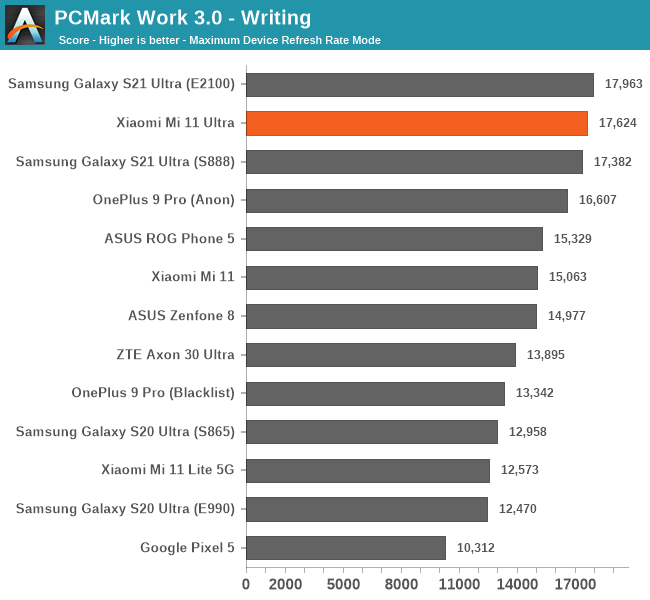 In the writing subtest which is one of the most representative for general device responsiveness in every-day usage, the Mi 11 Ultra is extremely well performing and just notches out the S21 Ultra – only the Exynos here is slightly even more aggressive. There’s quite a bit of a difference to the Mi 11 which is to be noted. 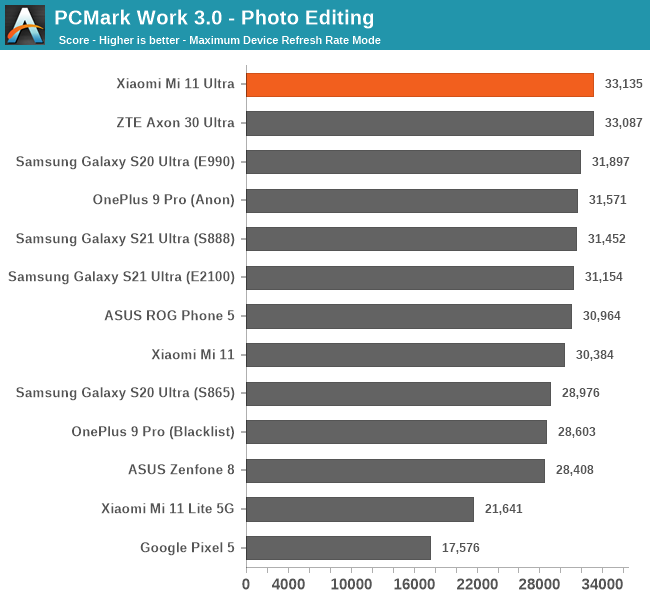 Photo editing workloads generally fall back to the GPU via RenderScript, and we see the Mi 11 Ultra take the top spot by a smidge of a performance advantage over the Axon 30 Ultra. 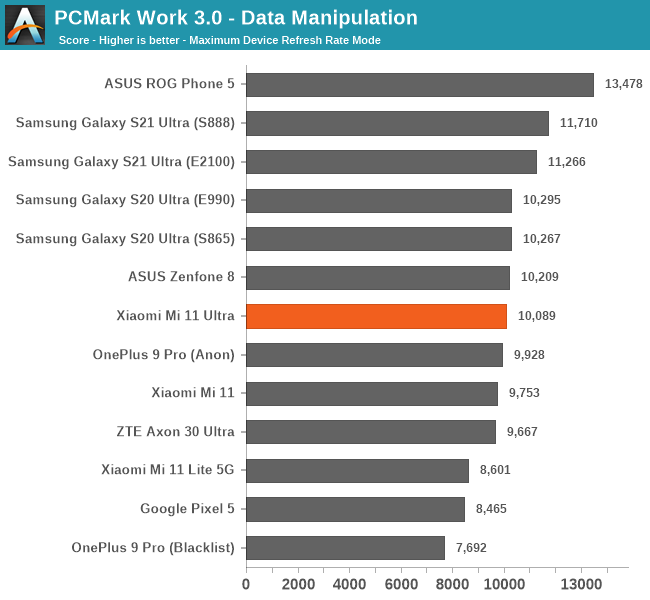 The data manipulation test is mostly single-threaded bound and here it depends on how the OS schedules things on the UI. The Mi 11 Ultra falls in the middle of the pack. 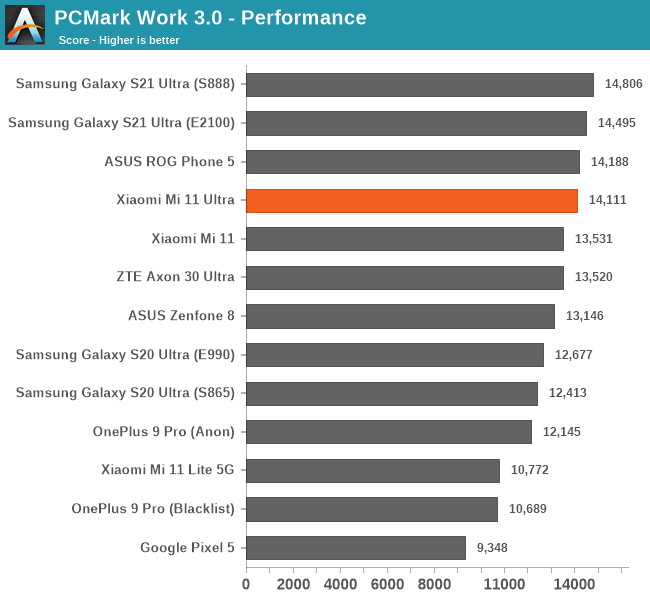 Overall, the Mi 11 Ultra falls in amongst the top performing flagship phones in 2021, which is unsurprising and very much what we expected.

Alongside a new PCMark version, this year we’ve also hit the reset button on our browser benchmark results due to the introduction of 64-bit web browsers. For the same reasons aforementioned in PCMark, the new AArch64-only software packages for browsers mean that the new results can take better advantage of microarchitectural features of CPUs which were previously not used in the 32-bit variants, augmenting the scores for newer generation devices, making the scores incompatible. We’ve retested a range of recent flagship devices: 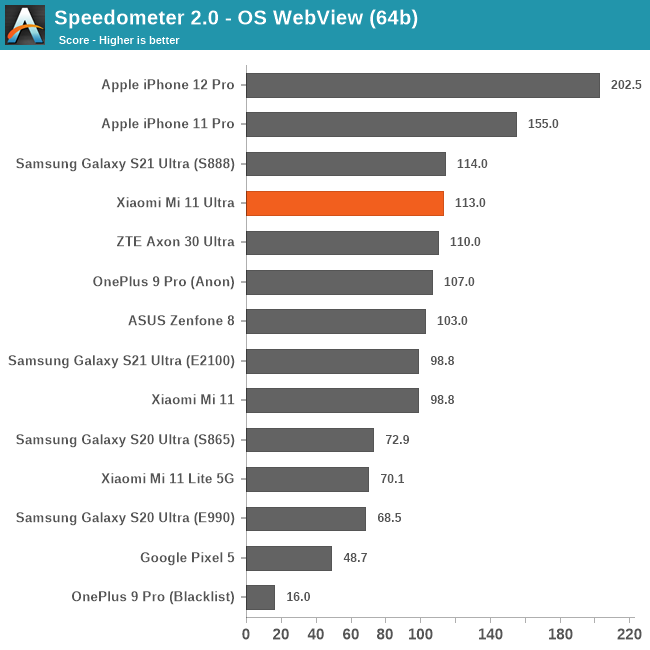 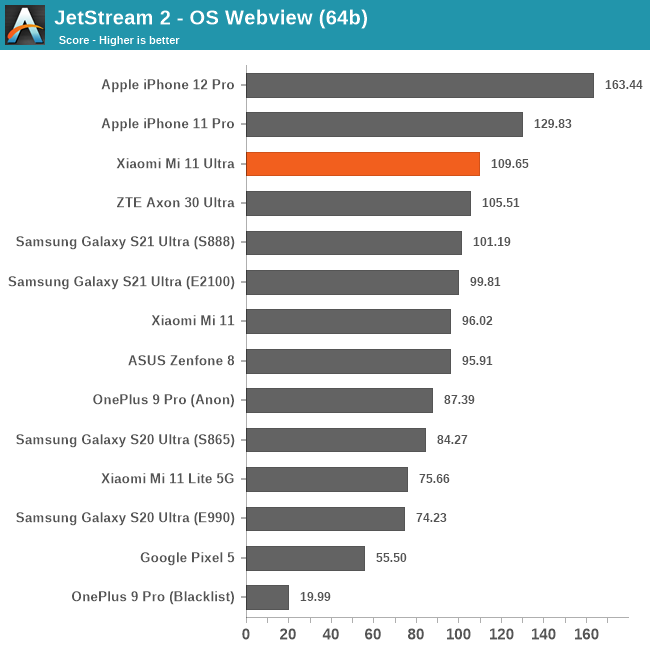 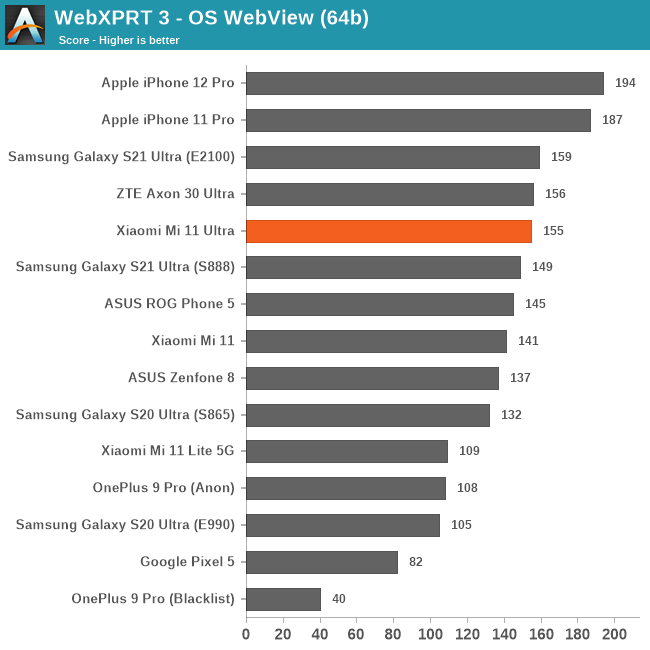 In all the web tests, the Mi 11 Ultra also performed admirably, as one of the top-performing Snapdragon 888 devices on the market.

Subjectively, the Mi 11 Ultra is absolutely one of the fastest and most responsive devices on the market right now. When Xiaomi had pushed the new MIUI 12.5 version to the Mi 11 back a few months ago, I immediately noticed the vast improvement in overall UI performance, actually making me rank the Mi 11 and consequently also the Mi 11 Ultra as amongst the fastest Android phones out there.

The only real negatives I would have about Xiaomi’s software stack today is that the devices’ 60Hz mode is still seemingly extremely unoptimized compared to their 120Hz modes. I’m not exactly sure what is happening here, but it feels as if Xiaomi is not properly scaling or altering various scheduler settings to 60Hz down from 120Hz, or I also suspect that Xiaomi is tying the touch sample rate to the refresh rate, as I notice vastly increased delay in the 60Hz mode, something which doesn’t happen or is nearly as noticeable on Samsung’s 60Hz mode on their 120Hz devices.