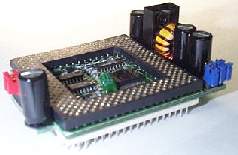 The biggest hurdle involved in a Socket 7 CPU upgrade is the hardware limitations of the current motherboard, including the voltage and clock multiplier support. The PL-ProMMX takes care of these issues with a small adapter that sits between the motherboard's Socket 7 (or even Socket 5) and the new CPU, which plugs into the adapter board's own Socket 7. On this little adapter is a switching voltage regulator with four 1500uF capacitors and a toroidal inductor. This voltage regulator module is powered via a standard 4-pin power connector from your power supply.

The included fan and heatsink are both of very high quality and do an excellent job of keeping the CPU cool. The fan is a ball bearing design, which should help to insure it will last a long time. Unfortunately, it is not the quietest CPU fan I have ever seen, but certainly not the loudest either.

Since the adapter can only deal with electrical and clock multiplier issues, BIOS support is still a potential downfall. A list of compatible systems and motherboards is available from Powerleap's website and many incompatibilities can be resolved with a simple BIOS flash from the system or motherboard manufacturer. According to Powerleap and AMD, almost any system with one of the following BIOS's can be upgraded successfully:

Simply having a "compatible" BIOS does not mean that a K6 series CPU will be recognized as such. What it does mean is that the system will be able to successfully boot up, but the CPU may not be properly recognized - commonly as a 486DX2/66 for example.

A small utility is included that will enable the K6's performance enhancing "Write Allocate" feature for those system BIOS's that do not recognize the K6 as such. This is necessary to utilize the full performance potential of the K6 series CPU's. Note that this utility software is only designed to work on Windows 95, 98 and NT, so alternative OS users will not be able to take advantage of the full performance potential of the K6. We'll take a closer look at this utility a bit later.