Both laptops used identical power saving settings under Windows Vista's "Balanced" plan (with some minor tweaks to the defaults on both systems). We ran five different test scenarios, ranging from best-case idle battery life at the Windows desktop to a far more taxing DVD/x264 playback results, along with two different Internet surfing benchmarks. One Internet benchmark represents a "light" load while the other has far more Flash content and represents a "heavy" load. We set both LCDs to 100 nits brightness (40% in this case) and completed a couple charge/discharge cycles to break in the battery before beginning our tests. Here are the results. 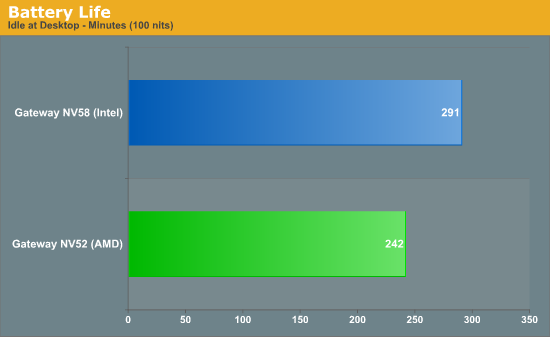 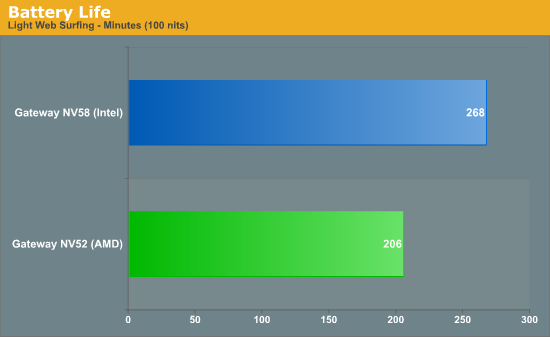 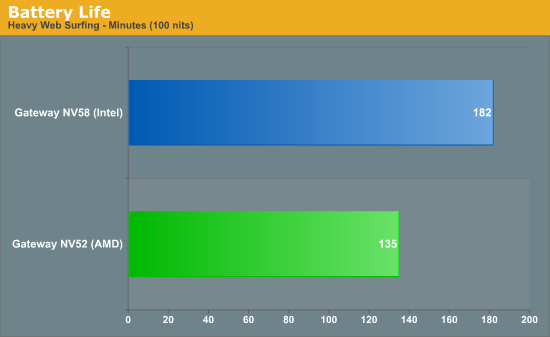 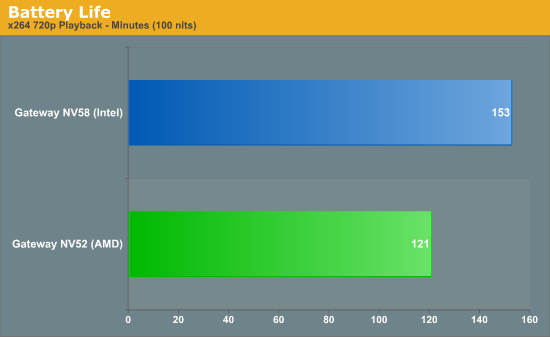 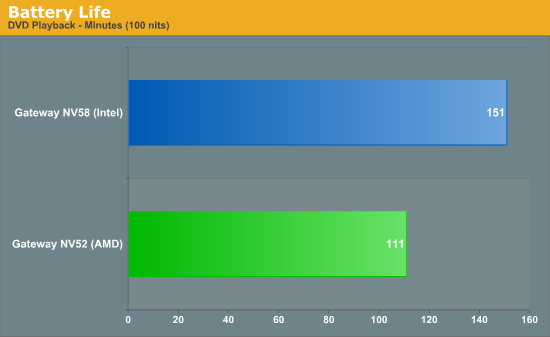 Obviously, despite having identical clock speeds there are some real differences between the two processors. For one, Intel's T6500 is a 45nm part compared to the 65nm QL-64 (not that AMD has 45nm parts yet). We also don't know how much of an impact the various chipset and motherboard components might have. What we do know is that AMD's current mobile processor lineup consists of dual-core CPUs that range from 2.00GHz up to 2.50GHz, with most having a 31W TDP to 35W TDP rating; the TK-42 is a 20W 1.60GHz part and the QL-62 is a 25W 2.00GHz part. Intel on the other hand has many more options. 10W dual-core CPUs are available with clock speeds of 1.06GHz to 1.60GHz; 17W chips have clock speeds ranging from 1.33GHz to 2.13GHz; 25W processors start at 2.26GHz and end at 2.66GHz; and the 34/35W parts cover the gamut from 1.60GHz all the way up to 3.06GHz… and that's just the Core 2 Duo parts! Pentium Dual-Core, Core 2 Quad, and Core 2 Extreme parts are also available to flesh out the spectrum. Then again, some of those parts cost twice as much as the Gateway NV52 just for the CPU.

When Intel released Banias and the Centrino platform in March 2003, they started a revolution in their approach to mobile processor design. Power and efficiency became the focus rather than pure clock speed, and the result has been much better mobile processors when it comes to performance per Watt. Unfortunately for AMD, they appear stuck with the old way of doing things: build a generic architecture and then optimize it for power requirements on mobile chips. Essentially the same core K8 architecture that launched in 2003 continues to power AMD's mobile offerings, and while the ensuing shrink to 65nm has helped there's still a lot of ground to make up. AMD-based laptops are still more than fast enough for most users -- and let's make this clear, a $500 dual-core AMD laptop is tons faster than anything using Intel Atom (though it uses more power, obviously) -- but Intel has the upper hand. It's unfortunate there's not more competition in the mobile processor space, or we might start really start to see prices drop!

For now, if you're looking for an inexpensive laptop (not a netbook), you need reasonable battery life, and you don't care about graphics performance we suggest saving up the extra $50-$100 for an Intel-based system.