Since the first Duron 700 we reviewed had no problem overclocking all the way up to 900MHz, there is no reason that AMD would have to make any dramatic changes to their Duron core in order to allow it to hit 750MHz. 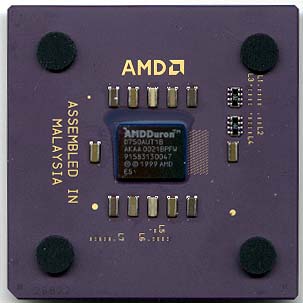 With the Thunderbird being rated at between 1.70 - 1.75v, it makes sense that as the Duron increases in clock speed, its core voltage will see a similar increase until it reaches the level of the Thunderbird since it is based upon the same core but with less L2 cache.

The Duron processors are still coming out of AMD's Fab25 facility in Austin, Texas since they are using Aluminum interconnects versus their high speed Copper counterparts being produced in the Fab30 plant in Dresden. It seems like Copper may be necessary for the Thunderbird/Duron core to reliably reach 1GHz and beyond, which could explain why we're only seeing 1GHz+ CPUs coming out of Dresden.

For now, all Durons are still using Aluminum interconnects and are thus being produced in AMD's Fab25 plant.