The Celeron 766 remains unchanged from the previous Celeron processors.  It is still manufactured by disabling half of the cache on low-yield Pentium IIIs that have bad cache blocks, thus giving the Celeron half the cache as well as making that cache half as associative as the Pentium III’s cache.  This ends up hurting the Celeron severely as it, clock for clock, is unable to outperform the Pentium III, even when both are clocked at the same FSB/memory clock.

The explanation for this is simple, the less associative a processor’s cache is, the lower hit-rate it has, and the lower the hit rate, the more times the CPU has to go to main memory to fetch needed information.  In the case of the Celeron, the memory bus is running at a horrendously slow 66MHz which just amplifies the downsides to its 4-way set associative L2 cache versus the Pentium III’s 8-way set associative L2. For more information on cache mapping techniques, check out our one page guide here. 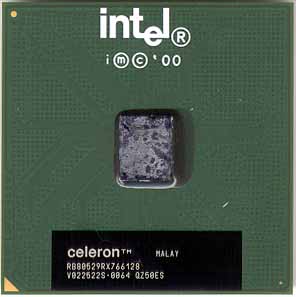 The Celeron 700 is really no different from the 566/600MHz parts that have been on the streets for a while now.  It is still based on the same 0.18-micron Coppermine128 core, features the same amount of L1 cache (16KB Instruction + 16KB Data cache) and the same 128KB inclusive L2 cache.