A Month with the iPhone 5s: Impressions from an Android User

From a purely functional perspective, there are some pain points involved in moving from Android 4.4 to iOS 7. While it’s been talked to death now, the lack of a system similar to intents on Android and the lack of customizable keyboards are definitely a bit on the frustrating side. For example, while on Android manually uploading screenshots, photos, and video to Dropbox is a relatively painless process, doing the same on iOS isn’t possible. While one of the first things I do on any Android smartphone is install SwiftKey, it’s not possible to do the same on iOS. This immediately causes my typing speed to drop, although in the case of iOS’ keyboard this is mostly due to the lack of punctuation in the letter page. However, these two immediate issues are about to be irrelevant with the release of iOS 8, so this is more of a temporary issue than a permanent one.

Although also temporary, for those that have become accustomed to the significant amount of custom control provided by camera apps from HTC and Samsung, the iOS camera application is comparatively barren. There's the ability to toggle HDR, flash, tap to focus/expose and lock focus/exposure. In effect, there's no real way to set manual controls. While the auto mode is pretty much as good as it gets, I find myself missing manual controls when it comes to taking macro photos and in other similarly extreme conditions.

There are a few other issues though. To someone that has almost solely used Android smartphones, the notification drawer has some odd behavior. It’s never really made sense to me why notifications can only be cleared by application. I definitely think a clear all notifications button would be a good addition for the future, but this is only a significant problem if a large number of notifications build up without getting cleared away. I'm also not sure what the value is to segregating "all" and "missed" notifications. Android definitely handles this better, although it probably makes more sense to those that have used iOS' notification system from the start.

Outside of these issues, there’s quite a lot to like. The vast majority of applications that I used had a consistent style that fit with iOS 7, with no strange scaling issues or unexpected behavior. This still tends to be a problem in Android, so it’s refreshing to have an app ecosystem that tends to keep up with the design guidelines set with each new iOS release. There’s also just about no stuttering or pausing in the experience. While Android L and ART should bring much better performance to Android smartphones, in iOS it seems that such performance issues haven’t really existed in the first place. 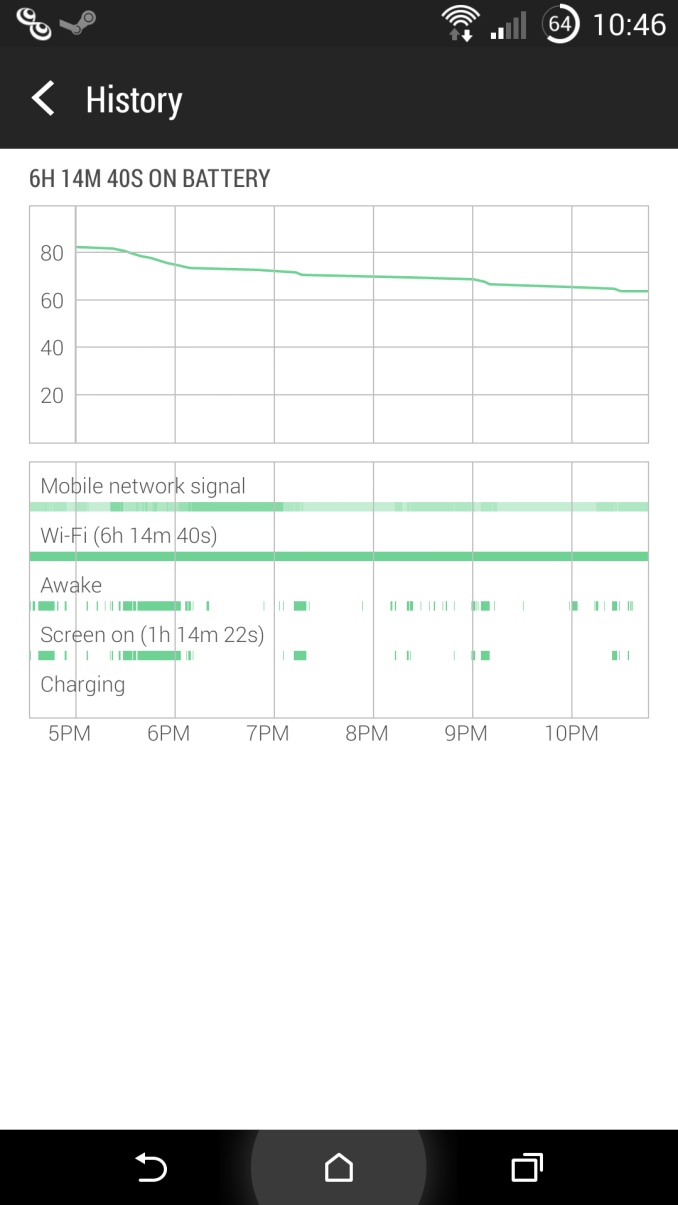 Of course, while there are some issues that could be fixed, there are others that are much more fundamental. One of these is direct access to the file system. While it’s quite convenient in Android to trawl through system files to learn about the underlying hardware and move around data using a file explorer, it makes sense to completely sandbox applications from each other to improve security. Another advantage of sandboxing applications is that orphan files are nonexistent, which is an issue on Android devices.

In addition to file system differences, it’s a bit frustrating to not have detailed battery life statistics when it comes to how much CPU time each application consumes, how long application wakes up the system while the screen is off, and similar details. However, it once again makes sense for Apple to do this. After all, iOS battery management is already quite stringent. In general, applications are strictly regulated and most cannot run in the background for any significant amount of time. On Android, it's possible for a single rogue application to ruin battery life, but this same system means that multitasking tends to be much faster and smoother.

If anything, this may be the real difference that matters when comparing iOS and Android. While Android and iOS are largely similar in features, there is a fundamental divide in the way the two OSes are designed. At its core, iOS is designed with average users in mind. As a result, there’s a strong emphasis on making things “just work” and hiding information that would simply confuse and frustrate people that don’t care about the underlying hardware and software. Android at its core is targeted at those that want to have the full PC experience on their phone, and as a result there’s much more information and low level functionality for those that want it. However, this can easily be frustrating and confusing for the end user. Of course, it’s fully possible for iOS to adopt features that would be targeted at advanced users, and Android can be changed to be more user friendly. If anything, this hypothetical has been the case for the past few years. Over time, Android has become a more friendly OS with the removal of the search and menu keys, going from the dark themes of 2.3 and 3.0 to the brighter, cleaner designs of today. Things like Google Maps have become considerably more simplistic, and even microSD slots had significant restrictions added to them in an attempt to simplify the user experience. Similarly, the fact that manual camera controls are even possible speaks to how Apple is adding more niche features. 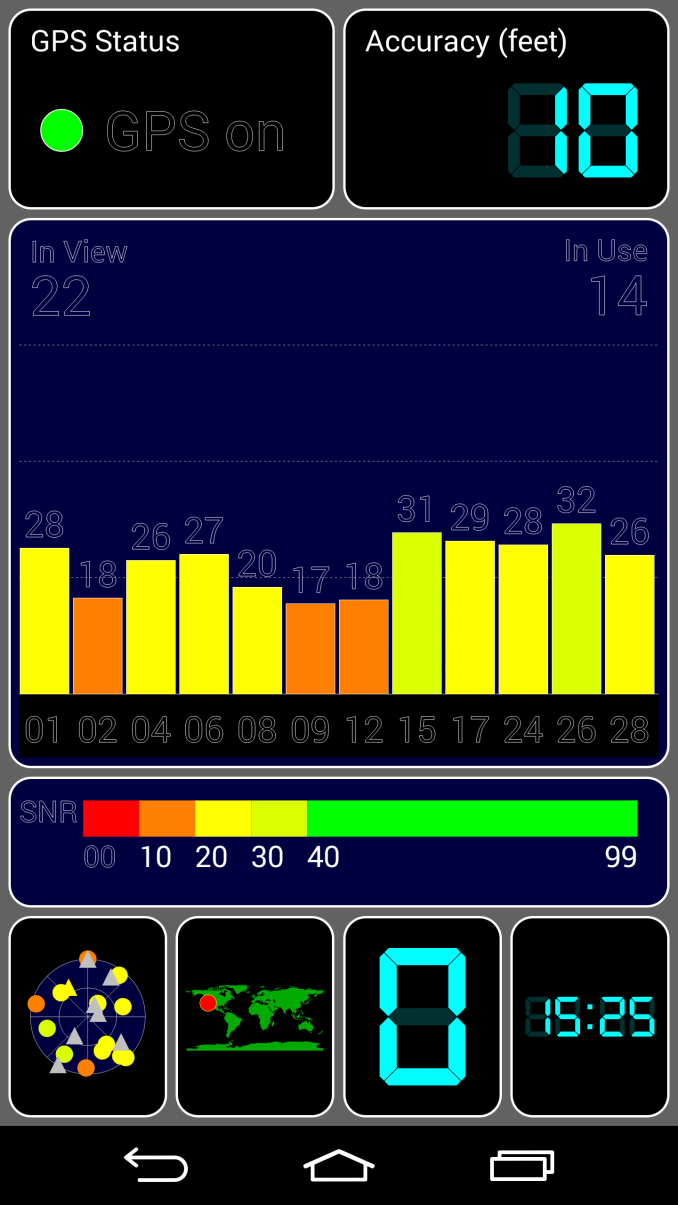 GPS Info! on iOS and GPS Test on Android

However, the differences remain, and understanding this is as simple as looking at how equivalent features are implemented. For example, location services in iOS are binary in nature, and can only be turned on and off globally or for each application. In Android there’s noticeably more nuance. Location can be done only by on-device GPS, or by using WiFi/cell tower location, or by using both. In addition, it’s possible to view GPS data such as per-satellite SNR and number of satellites used and in view.

At the end of the day, the iPhone 5s has aged quite well. While the hardware quality is a cut above, it’s more than just a matter of pure hardware. It’s clear to me that the user experience wouldn’t be nearly as good without Apple’s strong control over software. TouchID is quite possibly the best example of this, as there’s no need to wait for an official API to support fingerprint authentication for App Store purchases or other similar situations. While I felt a bit constrained by the limits in the operating system, the integration and overall quality of the experience outweighed these disadvantages. I’m not quite sure if either is better at this point, as while I definitely enjoy the amount of low-level information and customization available on Android, iOS has a much more polished and highly integrated experience.

However, in the long run it seems likely that they will converge towards largely similar feature sets. This doesn't mean that they'll be identical, as there's a distinct parallel in the Mac vs Windows debate. In Windows, adoption of new hardware features into the OS tended to be slower and not as well integrated as the OS vendor and multiple OEMs had to try and coordinate such a task. However, a major advantage of such a system was that backwards compatibity and flexibility was greater, even if it was more complicated for the end user. Similarly, Mac has tended to have new features at a faster pace and with better integration, such as high DPI displays. However, the result tends towards less control over low-level settings and less visibility into low-level information. The tight integration between hardware and software also means that it's harder to provide extensive backwards compatibility.

Of course, these are mostly broad strokes. It's not really possible to predict what the future holds, but even now we can see major differences. Google has allowed for custom OEM UIs on top of Android, and doesn't profit directly from the sale of Android OS. Similarly, the nature of smartphones dictates tight integration, so it's not really possible to upgrade the OS without a new BSP and major work on the part of the OEM to push an OTA. Apple has also managed to ensure that the app ecosystem of iOS is equal to or greater than any other mobile OS, something that was a major stumbling block with Mac OS in the early days of personal computing. While a great deal of maturation has occured in the smartphone market, there is still a long road ahead before the story can end.