Compaq is one of the largest notebook producers in the industry. Their current product line includes seven different notebook families each with unique configuration options. The Presario 2800 series notebook that we took a look at is touted as having "next generation desktop performance, distinctive style and mobile freedom."

Hitting the large release button on the front of the system unlatches the Presario 2800T's 15.0" SXGA+ LCD panel whose latches are covered by chrome plates.. Lifting the panel up reveals the keyboard and trackpad input device. The keyboard is a standard 85-key full size black keyboard that features dedicated arrow keys and home, page up, page down and end keys. They keyboard felt very similar to that on the WinBook N4, which is a good thing because we found both keyboards comfortable.

The touchpad on the Presario 2800T is unique not only in its shape but also in its buttons. First off, as opposed to a square touchpad, the Presario 2800T's touchpad surface is oval with chrome border. We really saw no advantage or disadvantage to the touchpad's shape; it was just different. The left and right click buttons below the touchpad were also uniquely shaped, curving to fit the contour of the touchpad. Unfortunately we found the buttons a bit too small for our liking. We did get used to them after a bit of use, however.

Below the touchpad and its buttons lies a four direction control button. The arrow pad serves as a four way scroll button, scrolling up, down, left, and right. The multipurpose button was nice, but it did contribute to the rather small left and right click buttons. 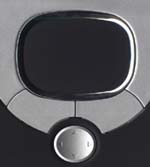 Above the keyboard are a set of seven "easy access" buttons. The buttons perform any number of tasks that can be set by the user. By default, the i button launches the default browser and goes to Compaq's information page, while the mail button launches the default mail program, and the magnifying glass button goes to a Yahoo search page. The next button over, the large one in the middle of the easy access button row, is the power button. The music note button to the power button's right is set to launch Windows Media Player by default, while the plus and minus buttons on the far right sets the system volume up or down.

The Presario 2800T includes status LEDs for all important functions. On the front of the system, to the left and right of the LCD panel latch are two LEDs. The one on the left of the latch indicates power status: on indicated by a steady green, standby indicated by a blinking green. The LED on the right of the latch indicates battery status: solid green for charging, blinking green indicating that the battery is low.

Four more LEDs are located above the keyboard, to the left and right of the easy access buttons. The far left LED is the AC power status LED which glows green when AC power is being supplied to the laptop. One LED to the right over is the number lock key which turns number lock on and allows for a block of keys on the keyboard to act like a number pad. To the right of the access pad are two more LEDs, the first one indicating caps lock status and the second one indicating IDE drive access.

The front of the notebook was fairly simple, with the LCD latch in the middle and two speakers on each side. The sound of the Presario 2800T was comparable to that of the WinBook N4 which means that they provide the audio output that one would expect out of such a small system. For casual use at low volumes the sound was fine, but cranking up the sound really brought out the distortion.