ASUS in the Mobile World

ASUS entered the IA market approximately two years ago. The IA team spun from the multimedia product team that previously had been working on video and sound items and focused on producing new products for ASUS. Primarily, the IA team decided to focus their efforts on laptops, webpads, PDAs and set-top boxes.

Our meeting with the head of the mobile division, a very interesting man who will go unnamed as per his personal preference, focused on discussing ASUS' MyPal A600. You may recall from our Day 2 Computex 2002 coverage, the ASUS MyPal A600 is an Xscale based PDA solution that combines long battery life, a 400MHz processor and PocketPC 2002 in a package only slightly larger than the Palm m515. The product actually ended up winning a "Best Choice" award for Mobile Products from the organizers of Computex and from what we saw they made the right decision: it looks like the MyPal A600 could be the iPaq of tomorrow. 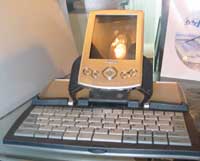 The MyPal A600 is ASUS' second generation PDA. The first generation ASUS PDA did not take off as the company would have liked; the PDA never made it in the US market. ASUS knew that something had to be changed to make the MyPal A600 successful.

In order to make a successful second generation product, ASUS had to attack the PDA market with the cut throat motherboard mentality: be the first to market with an unique product that distinguishes itself from others. It is the company's experience in the motherboard market that gave them the edge they needed to become a contender.

The design process of the MyPal A600 was unique among PDAs. Rather than create size constraints and design a hardware system to fit in a predetermined package, ASUS began with the hardware and worked from the inside out. The process started with placement of the CPU and evolved from there, at each stage attempting to make the unit as compact and powerful as possible. As the final product shows, the results were impressive. The MyPal A600 measures 4.92 x 2.95 x 0.5 inches and weighs only 5.3oz, making it significantly smaller than the other PocketPC 2002 solutions we have seen with the exception of the impressive Toshiba e310 (a StrongARM solution).

As a result of the "inside-out" mentality, the MyPal A600 is one able-bodied PDA despite its size. We already mentioned the 400MHz PXA250 Xscale processor, but the system also includes 64MB of RAM and 32MB of ROM as well as a 240x320x65K TFT LCD, built-in speaker, built-in microphone, and built-in SD/MMC slot.

Despite all the power that the tiny MyPal A600 contains, the unit is far from power hungry. The unit's internal battery is rated at 1200mA/h, placing it 200mA/h less powerful than the Compaq iPaq 1400mA/h battery. Nonetheless, the MyPal A600 boasts an impressive battery life using Microsoft's own battery benchmarking program. In the test, with the sidelights of both units set to off, the iPaq lasts nine hours while the MyPal A600 lasts sixteen hours. In fact, the sixteen hours of battery life sets a new record for PocketPC 2002 based PDAs. Needless to say, the iPaq and the MyPal are based off of different CPUs, but the battery life is impressive no matter how you look at it.

ASUS also mentioned that according to the Microsoft PocketPC 2002 specifications, battery life in this test must be at least eight hours to be certified by Microsoft. As a result of this, many companies have little incentive to push the eight hour mark much. When designing the MyPal A600, ASUS was not concerned with only meeting the established specifications, but also satisfying the user's needs. This truly is a solution for the masses.

One thing that was stressed during our meeting is the importance of software when it comes to developing a PDA solution. No matter how good a piece of hardware is, without proper software the hardware is about as useful as a paper weight. We could not agree more. This is especially important in the case of a PDA, where every unit sold includes software to make it work properly. Many PDA producers turn to third party companies to provide software solutions, but ASUS is in the unique position of being able to provide an in-house software solution. This drastically increases the frequency of software updates and tweaks that can be applied to a product.