The big news out of AMD was the launch of Zen, the new high-performance core that is designed to underpin the product roadmap for the next few generations of products. To much fanfare, AMD launched consumer level parts based on Zen, called Ryzen, earlier this year. There was a lot of discussion in the consumer space about these parts and the competitiveness, and despite the column inches dedicated to it, Ryzen wasn’t designed to be the big story this year. That was left to their server generation of products, which are designed to take a sizeable market share and reinvigorate AMD’s bottom line on the finance sheet. A few weeks ago AMD announced the naming of the new line of enterprise-class processors, called EPYC... 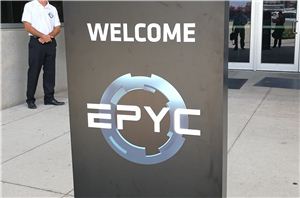 I'm in Austin for AMD's launch event for their new server parts, named EPYC. Come back at 4pm ET (3pm Austin) for the Live Blog on the official announcement!