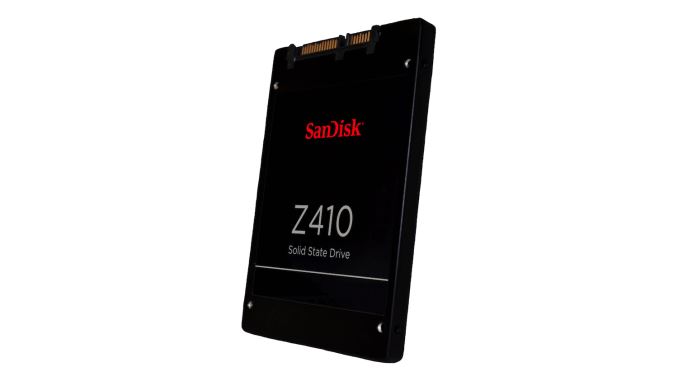 SanDisk has introduced a new low-end drive to their line of client SSDs targeted at business and OEM customers. The Z410 is positioned closely to Z400s but is not a direct replacement. Instead, the Z410 focuses on offering just the most popular capacities for mainstream PC usage while the Z400s continues to serve other markets with mSATA and M.2 versions and capacities as small as 32GB.

First announced almost a year ago as the first 15nm TLC SSD, the Z400s sought to cut costs in order to break into new parts of the embedded and client PC markets. The Silicon Motion SM2246XT controller it uses is a DRAM-less two or four channel design that limits potential performance and capacity. The SM2246XT also lacks encryption support and LDPC error correction.

The SanDisk Z410 abandons the mSATA and M.2 form factors to focus specifically on 2.5" with capacities from 120GB to 480GB. The only significant performance difference from the Z400s is a substantial increase in sequential write speed, while sequential read speeds are rated slightly lower and random read and write specifications are similar. The Z410 does benefit from a controller upgrade that allows for LDPC error correction and SLC caching, but it seems the latter's impact on write amplification has kept the write endurance ratings from increasing substantially. The three year warranty period on the Z410 is also shorter than the five years offered for the Z400s.

The introduction of the Z410 puts SanDisk in the unusual position of having three tiers of TLC NAND-based SATA SSDs. While their consumer-oriented product line still includes the MLC-based Extreme Pro, SanDisk's business/OEM line tops out with the TLC-based X400. The X400 distinguishes itself with clearly higher performance and endurance and the availability of a 1TB capacity, but the Z400s and Z410 are close enough to cause some confusion. The Z410 will probably end up displacing the 128GB and 256GB 2.5" Z400s while the rest of the Z400s line sticks around for the less competitive niches.