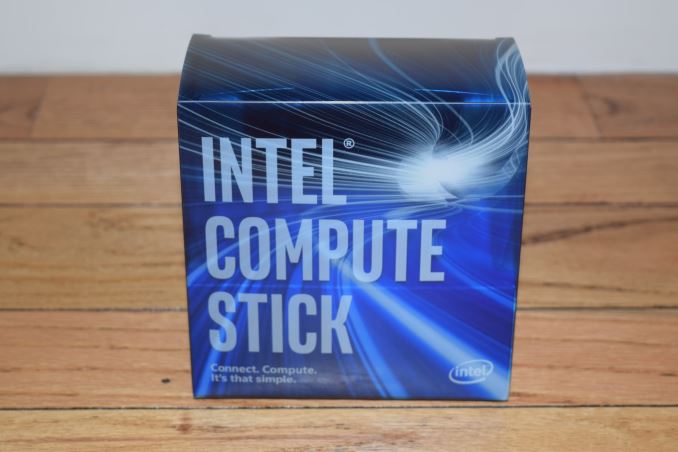 Small and power-efficient computers in the form of NUCs and Compute Sticks have emerged as bright spots in the PC market over the last few years. The Compute Stick form factor is the x86 version of the popular ARM-based HDMI sticks. The first-generation x86 Compute Stick came from Intel and used a Bay Trail-T SoC. At the 2016 CES, Intel introduced a Cherry Trail version, as well as two Skylake Core M-based models. We reviewed the Cherry Trail version back in January, and it is now time for one of the Core M versions to be subject to our mini-PC evaluation routine.

The Intel Compute Stick we are reviewing today is the Core m3-6Y30 model (STK2M3W64CC) that comes with Windows 10 Home (64-bit) pre-installed, making it ready to roll right out of the box. The specifications of our Intel STK2M3W64CC review configuration are summarized in the table below.

The Core m3-6Y30 belongs to the Skylake Core M family. It is meant to target the fanless 2-in-1 market, but, in the Compute Stick, it is actively cooled.

The STK2M3W64CC comes with the OS pre-installed, but, it is suggested to update the drivers that ship with the system. Drivers and BIOS updates are available for download on Intel's website. In addition to the main unit, the other components of the package include a 21.44W (5.2V @ 2.2A Type-C + 2x 5V @ 0.9A USB 3.0 Type-A ports) adapter with a Type-C power delivery port that can also ferry data between the main unit and Type-A ports. The cable is more than 3ft in length. We also get a HDMI extender cable to help use the Compute Stick in recessed or otherwise inaccessible HDMI ports. 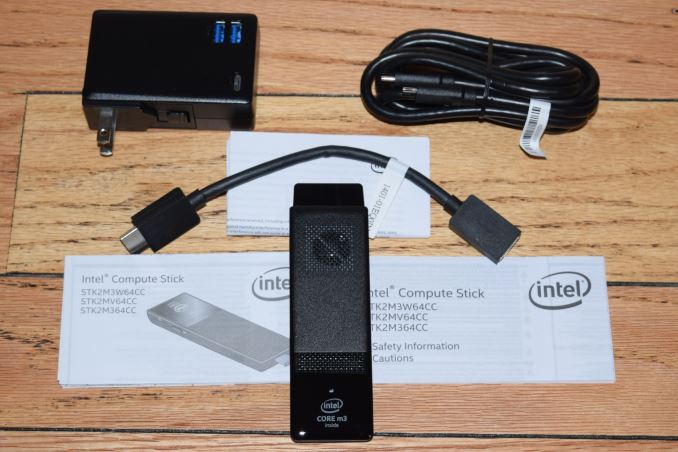 The gallery below presents a closer look at the chassis design of the Core m3-6Y30 Compute Stick and the packae contents.

We had a very difficult experience managing our previous mini-PC reviews with just 32 GB of eMMC storage and/or 32-bit versions of Windows pre-installed. Fortunately, the STK2M3W64CC comes with 64GB of eMMC and Windows 10 Home x64 pre-installed. We were able to set up the system with a 20GB internal partition after shrinking the partition on which the OS was installed.

The BIOS of the Core M Compute Stick has a lot of interesting features compared to the ones in the Atom-based units. One of the notable optons is the ability to completely turn off the fan. The default setting is to keep it off till needed, and speed it up based on the thermal load.

We also have a good deal of control over the behavior of the front LED from the BIOS. Bluetooth devices can be authorized in the BIOS to make them available even before the OS is up and running.

In the table below, we have an overview of the various systems that we are comparing the Intel Core m3-6Y30 Compute Stick against. Note that they may not belong to the same market segment. The relevant configuration details of the machines are provided so that readers have an understanding of why some benchmark numbers are skewed for or against the Intel Core m3-6Y30 Compute Stick when we come to those sections.