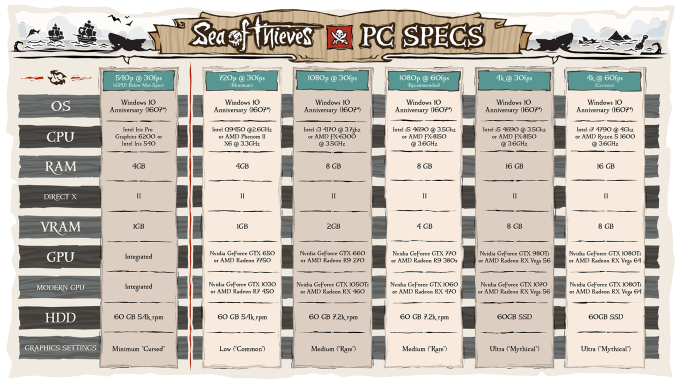 As far as game specification requirements go, Sea of Thieves developers Rare published a rather thorough chart earlier this month. For AMD GPUs the developers are looking at RX Vega 64 for 4K60 and RX 470 for 1080p60. While the full release is still around a month out, Rare has been conducting various closed betas; this weekend (2/23 to 2/25), the company is holding its second Scale Test, open to Xbox Insiders and those with access to the Closed Beta. Another beta is planned closer to the launch date.

Moving on to the bugfixes themselves, 18.2.3 resolves the following issues:

Accordingly, the list of open issues has been reduced, though with new items pertaining to Destiny 2 and FFmpeg:

To note, 18.2.3 is not applicable to APUs; the inaugural WHQL “Radeon Software for Ryzen Desktop Processors with Radeon Vega Graphics” remain the most up-to-date drivers for the newly released Ryzen 5 2400G and Ryzen 3 2200G. Meanwhile, AMD has updated their support page on system boot-up failure with some Ryzen 2000-series APU desktop processors on AM4 motherboards: the boot kit consists of a loaned A-series Bristol Ridge processor with heatsink-fan, with the processor to be returned after the motherboard has been updated to the latest BIOS with APU support.

The updated drivers for AMD’s desktop, mobile, and integrated GPUs are available through the Radeon Settings tab or online at the AMD driver download page. More information on these updates and further issues can be found in the respective Radeon Software Adrenalin Edition 18.2.3 release notes.