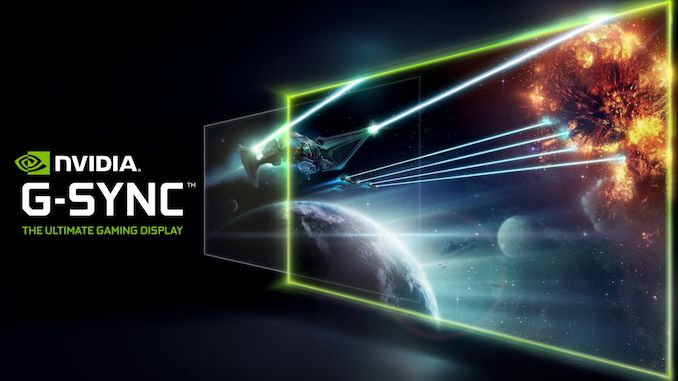 The history of variable refresh gaming displays is longer than there is time available to write it up at CES. But in short, while NVIDIA has enjoyed a first-mover’s advantage with G-Sync when they launched it in 2013, the ecosystem of variable refresh monitors has grown rapidly in the last half-decade. The big reason for that is that the VESA, the standards body responsible for DisplayPort, added variable refresh as an optional part of the specification, creating a standardized and royalty-free means of enabling variable refresh displays. However to date, this VESA Adaptive Sync standard has only been supported on the video card side of matters by AMD, who advertises it under their FreeSync branding. Now however – and in many people’s eyes at last – NVIDIA is going to be jumping into the game and supporting VESA Adaptive Sync on GeForce cards, allowing gamers access to a much wider array of variable refresh monitors.

There are multiple facets here to NVIDIA’s efforts, so it’s probably best to start with the technology aspects and then relate that to NVIDIA’s new branding and testing initiatives. Though they don’t discuss it, NVIDIA has internally supported VESA Adaptive Sync for a couple of years now; rather than putting G-Sync modules in laptops, they’ve used what’s essentially a form of Adaptive Sync to enable “G-Sync” on laptops. As a result we’ve known for some time now that NVIDIA could support VESA Adaptive Sync if they wanted to, however until now they haven’t done this.

Coming next week, this is changing. On January 15th, NVIDIA will be releasing a new driver that enables VESA Adaptive Sync support on GeForce GTX 10 and GeForce RTX 20 series (i.e. Pascal and newer) cards. There will be a bit of gatekeeping involved on NVIDIA’s part – it won’t be enabled automatically for most monitors – but the option will be there to enable variable refresh (or at least try to enable it) for all VESA Adaptive Sync monitors. If a monitor supports the technology – be it labeled VESA Adaptive Sync or AMD FreeSync – then NVIDIA’s cards can finally take advantage of their variable refresh features. Full stop.

At this point there are some remaining questions on the matter – in particular whether they’re going to do anything to enable this over HDMI as well or just DisplayPort – and we’ll be tracking down answers to those questions. Past that, the fact that NVIDIA already has experience with VESA Adaptive Sync in their G-Sync laptops is a promising sign, as it means they won’t be starting from scratch on supporting variable refresh on monitors without their custom G-Sync modules. Still, a lot of eyes are going to be watching NVIDIA and looking at just how well this works in practice once those drivers roll out next week.

Past the base technology aspects, as is often the case with NVIDIA there are the branding aspects. NVIDIA has held since the first Adaptive Sync monitors were released that G-Sync delivers a better experience – and admittedly they have often been right. The G-Sync program has always had a validation/quality control aspect to it that the open VESA Adaptive Sync standard inherently lacks, which over the years has led to a wide range in monitor quality among Adaptive Sync displays. Great monitors would look fantastic and behave correctly to deliver the best experience, while poorer monitors would have quirks like narrow variable refresh ranges or pixel overdrive issues, greatly limiting the actual usefulness of their variable refresh rate features. 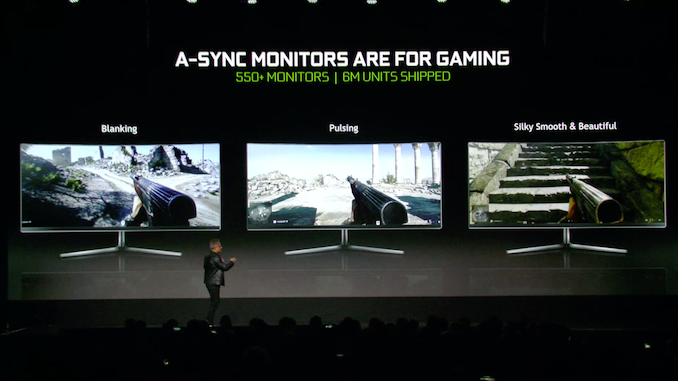 Looking to exert some influence and quality control over the VESA Adaptive Sync ecosystem, NVIDIA’s solution to this problem is that they are establishing a G-Sync Compatible certification program for these monitors. In short NVIDIA will be testing every Adaptive Sync monitor they can get their hands on, and monitors that pass NVIDIA’s tests will be G-Sync Compatible certified.

Right now NVIDIA isn’t saying much about what their compatibility testing entails. Beyond the obvious items – the monitor works and doesn’t suffer obvious image quality issues like dropping frames – it’s not clear whether this certification process will also involve refresh rate ranges, pixel overdrive features, or other quality-of-life aspects of variable refresh technology. Or for that matter whether there will be pixel response time requirements, color space requirements, etc. (It is noteworthy that of the monitors approved so far, none of them are listed as supporting variable overdrive)

At any rate, NVIDIA says they have tested over 400 monitors so far, and of those monitors 12 will be making their initial compatibility list. Which is a rather low pass rate – and indicating that NVIDIA’s standards aren’t going to be very loose here – but it still covers a number of popular monitors from Acer, ASUS, Agon, AOC, and bringing up the rest of the alphabet, BenQ.

As for what G-Sync Compatibility gets gamers and manufacturers, the big advantage is that officially compatible monitors will have their variable refresh features enabled automatically by NVIDIA’s drivers, similar to how they handle standard G-Sync monitors. So while all VESA Adaptive Sync monitors can be used with NVIDIA’s cards, only officially compatible monitors will have this enabled by default. It is, if nothing else, a small carrot to both consumers and manufacturers to build and buy monitors that meet NVIDIA’s functionality requirements.

Meanwhile on the business side of matters, the big wildcard that remains is whether NVIDIA is going to try to monetize the G-Sync Compatible program in any way, as the company has traditionally done this for value-added features. For example, will manufacturers also need to pay NVIDIA to have their monitors officially flagged as compatible? After all, official compatibility is not a requirement to be used with NVIDIA’s cards, it’s merely a perk. And meanwhile supporting VESA Adaptive Sync monitors is likely to hurt NVIDIA’s G-Sync module revenues.

If nothing else, I fully expect that NVIDIA will charge manufacturers to use the G-Sync branding in promotional materials and on product boxes, as NVIDIA owns their branding. But I’m curious whether certification itself will also be something the company charges for.

Finally, along with the G-Sync Compatible branding, NVIDIA is also rolling out a new branding initiative for HDR-capable G-Sync monitors. These monitors, which until now have informally been referred to at G-Sync HDR monitors, will now go under the G-Sync Ultimate branding.

In practice, very little is changing here besides establishing an official brand name for the recent (and forthcoming) crop of HDR-capable G-Sync monitors, all of which has been co-developed with NVIDIA anyhow. So this means all Ultimate monitors will need to support HDR with high refresh rates and 1000nits+ peak brightness, use a full array local dimming backlight, support the P3 D65 color space, etc. Given that it’s likely only a matter of time until G-Sync capable monitors with lesser HDR features hit the market, it’s a good move for NVIDIA to establish a well-defined brand and quality requirements now, so that a G-Sync monitor being HDR-capable isn’t confused with the recent high-end monitors that can actually approach a proper HDR experience.