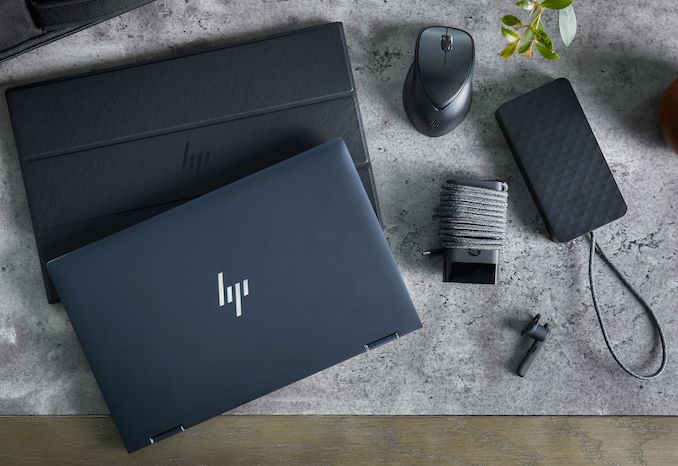 HP this morning is introducing its new flagship 13.3-inch convertible laptop, which the company is calling the Elite Dragonfly. The Project Athena-class laptop is designed to check all of the boxes for a high-end, compact laptop, offering premium features, a very low weight, and most interesting of all, an optional high-capacity battery that HP claims will run the laptop for over 24 hours. 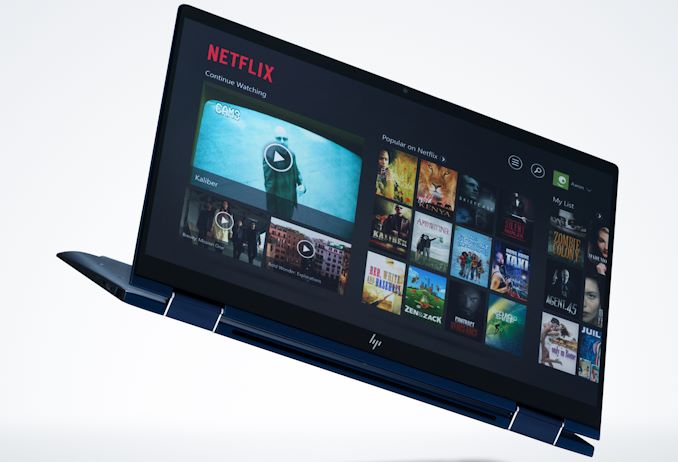 The HP Elite Dragonfly notebook comes in a CNC-machined magnesium alloy chassis, which has allowed HP to reduce its weight to around 990 grams (in case of the low-weight SKU with a 38 Wh battery) and maintain a 1.61 cm z-height. According to HP, the chassis also meets the durability requirements for the MIL-STD 810G standard (including spill resistance), so it looks like HP has been able to cut down on weight without compromising the durability of the laptop. Meanwhile, the entire chassis is covered with an oleophobic coating, to make the entire laptop resistant to fingerprints and smudges.

Front and center of the convertible notebook is the 13.3-inch touch-enabled display, which is available in Full HD (1080p) or Ultra HD (4K) resolutions, and options include a version of the FHD panel that incorporates Intel's 1 Watt panel tech. The display panel itself is protected by Corning’s Gorilla Glass 5, and for the privacy-minded, HP is also offering their SureView privacy screen as an option.

HP says that it has taken it a long time to engineer a laptop that could include all of the Elite Dragonfly's features, and to that end it has to stick to Intel’s proven low-power 8th Gen Core i3/i5/i7 processors (Whiskey Lake). Despite usage of a previous-generation CPU, the Elite Dragonfly is compliant with Intel's Project Athena requirements, so overall experience should be in line with other laptops designed for that program. The CPU is accompanied by up to 16 GB of soldered-down dual-channel LPDDR3-2133 memory as well as an SSD with capacities going up to 2 TB. Higher-end SKUs will use a PCIe 3.0 x4 drive, whereas cheaper or specialized models will come with a SATA drive, allowing HP to offer a FIPS 140-2-certified drive to customers who need it.

Communications are critical for business these days, so this is where the Elite Dragonfly excels. The convertible laptop comes with Intel’s Wi-Fi 6 + Bluetooth 5 adapter, an optional Intel XMM 7360/7560 4G/LTE modem with 4x4 antennas, and an optional GbE adapter. Meanwhile, when it comes to wired connectivity the laptop includes a Thunderbolt 3-enabled USB-C port, a stand-alone USB-C port, a USB Type-A port, a full-size HDMI port, and a 3.5-mm audio connector. Speaking of audio, when not using headphones the PC has four Band & Olufsen-badged speakers as well as a microphone array as its disposal. 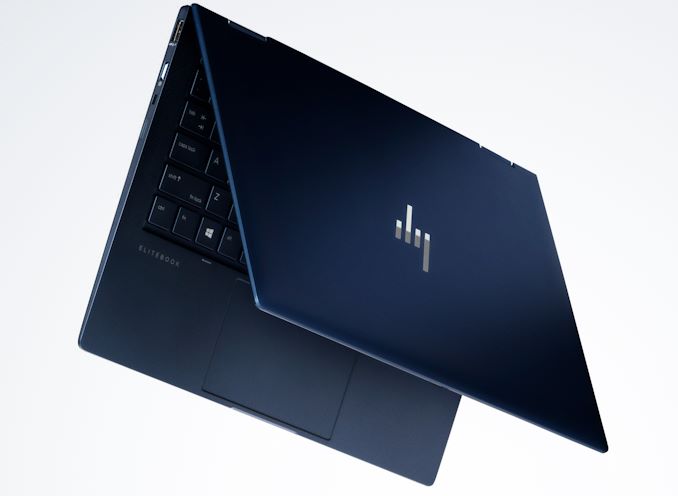 Being an Elite-branded laptop, the HP Dragonfly supports all the key security features that the manufacturer has to offer. In addition to HP SureView privacy screen as well as a 720p Privacy Camera (with or without IR sensor), the convertible supports HP’s Sure Sense, Sure Recover, and Embedded Reimaging technologies, a TPM 2.0 module, and an Absolute persistence module. 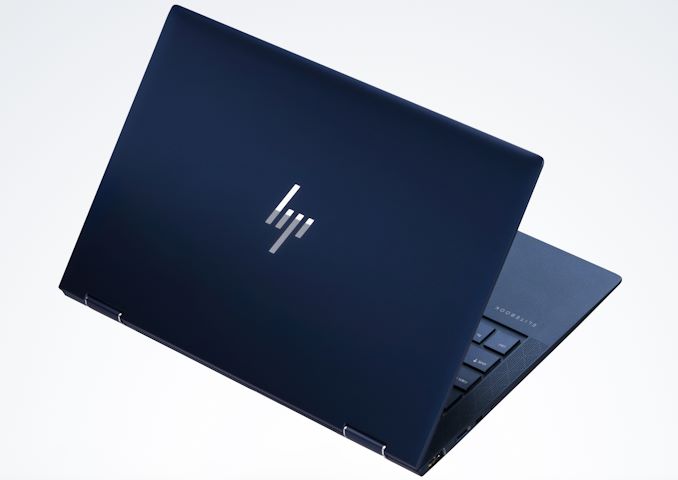 Meanwhile, when it comes to battery life, HP is making some bold claims, stating that that an Elite Dragonfly equipped with a Core i5 processor, 8 GB of RAM, a 128 GB SSD, and a 1-Watt Full-HD display, and a 56.2 Wh battery can last for up to 24 hours and 30 minutes on a single charge. These results are based on MobileMark 2014, a relatively light workload, so results will vary with the workload used. Meanwhile, machines with other configurations (e.g. a smaller battery) will last for a shorter amount of time. 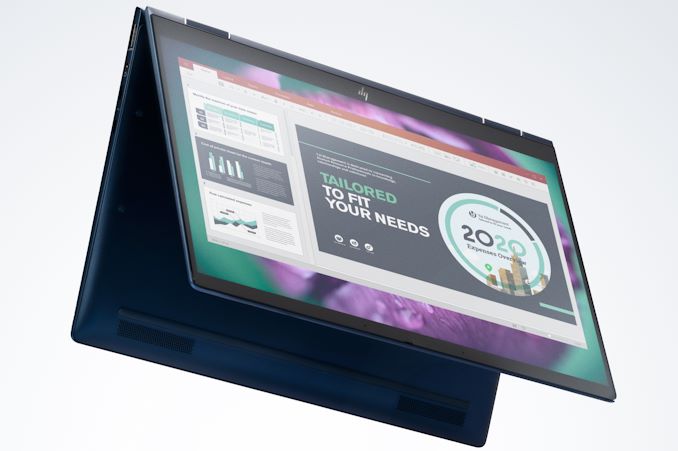 HP intends to start sales of its Dragonfly laptops on October 25. Prices for the entry-level Dragonfly convertibles will start at $1,549, but higher-performance SKUs will cost significantly more. In addition the the PC itself, the company will offer a travel mouse as well as a leather sleeve. 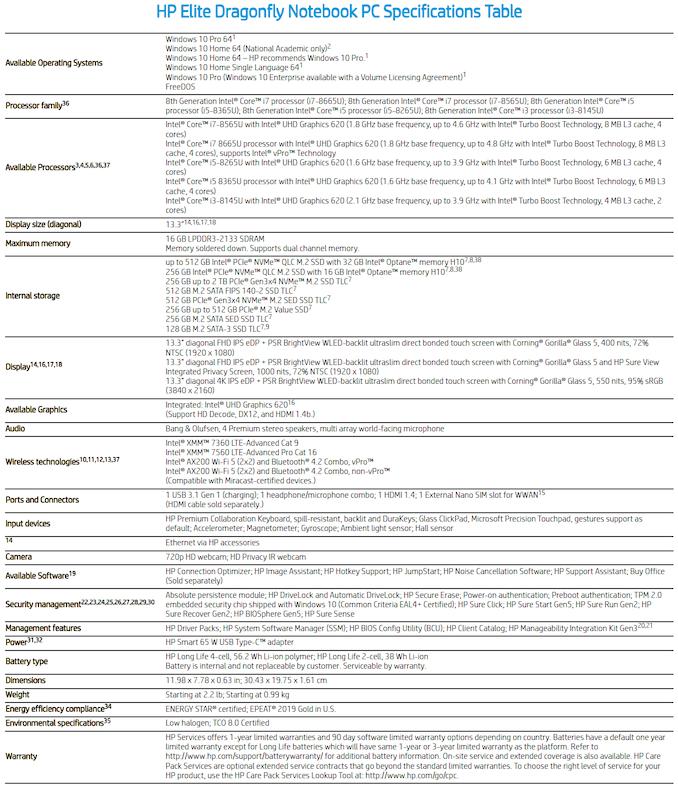