Motorola Announces New edge And edge+: Re-entering the Flagship Market with a Bang

Today Motorola announced its newest high-end devices for 2020 – and the company delivered quite the surprise, not only returning back to the flagship market, but also delivering some quite incredibly competitive hardware in this range for the first time in years.

The new edge and edge+ from Moto are respectively premium and no-compromise flagship phones that are clearly meant to lure in customers who over the last few years might not have considered a Motorola phone in these categories.

The edge+ essentially sports all bells and whistles you can imagine in a 2020 device – a new Snapdragon 865 phone, a triple camera-setup along with a massive 108MP camera sensor, a 90Hz high refresh-rate screen, 5000mAh battery, wireless charging, IP68 rating, and even a headphone jack. The more cost-sensitive edge sports the same design and screen, but comes with a Snapdragon 765 SoC and sheds a few other features from the package.

Let’s go over the details:

Starting off with the internal hardware, both phones come with the latest SoCs in their respective categories. The higher-end edge+ sports the Snapdragon 865 for the best Android performance on the market right now, while the regular edge sports a Snapdragon 765 – a still respectable SoC but not quite as competitive as the last generations of flagships.

Motorola also equips the DRAM and storage differently based on the model. The regular edge sports 6GB of LPDDR4X and 128GB of UFS 2.1 storage, whilst the edge+ comes with 12GB of LPDDR5 and 256GB of UFS 3.0 storage. 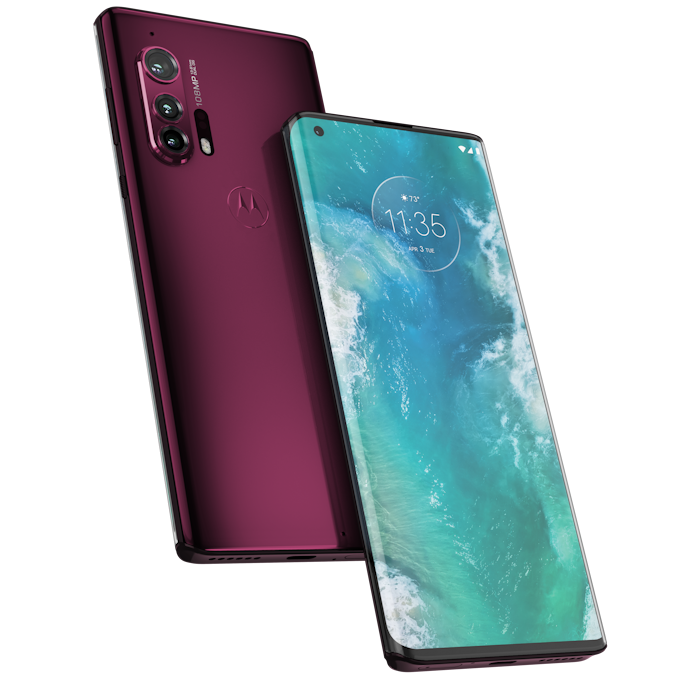 Both phones share similar designs and in fact have the same screen specifications: A 6.77” AMOLED screen at FHD+ (2340 x 1080) resolution, and both featuring an increased 90Hz refresh rate – certainly keeping them up to date with recent trends in the smartphone market. 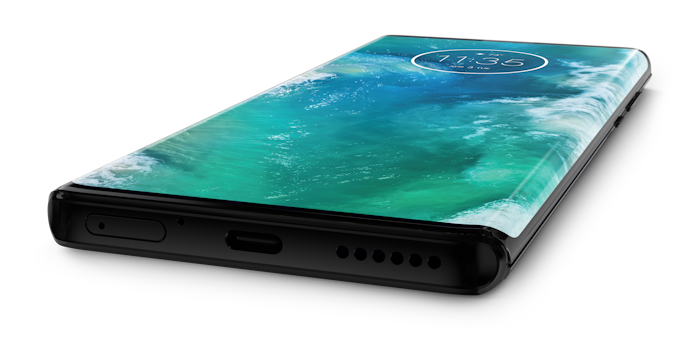 The “edge” moniker of the phones can be attributed to the fact that these are curved edge displays – more-so than usual as it reminds us of Huawei’s Mate 30 Pro with its almost 90° display curvatures. It doesn’t look like Motorola went for the full 90° here, but it’s still an extreme design element. For context, I wasn’t a big fan of the design on the Mate 30 Pro as I found it to be more of a cumbersome feature rather than actually benefiting the user experience. Here it seems Motorola thought of this and actually allows for blacking out of the outer-most portions of the edge, essentially hiding them.

The front screen is also characterised by a left-positioned front-facing camera hole punch. The hole is quite small here and I think the design works out well. The camera is a 25MP unit with f/2.0 optics. 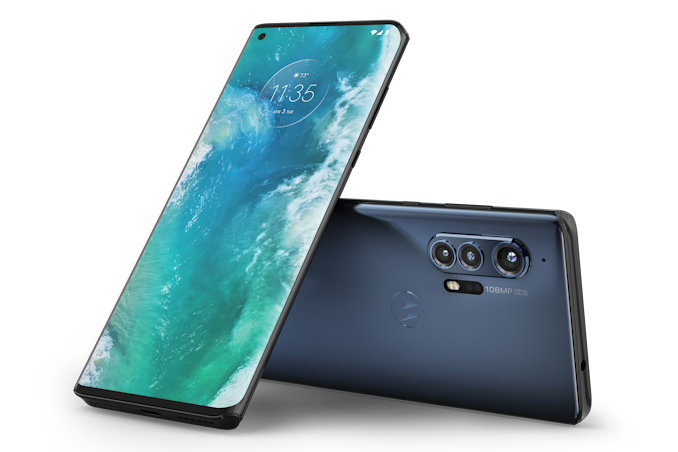 The phones are quite thick – 9.29mm on the edge and 9.6mm on the edge+, exceeding the usual dimensions of other devices in the market right now. Within that thick package, Motorola was able to include a 4500mAh battery in the regular edge, and a 5000mAh battery in the edge+. Both feature fast charging up to respectively 15 and 18W, but only the edge+ also has wireless charging up to 15W as well as reverse wireless charging. The phones weigh in at respectively 188g and 203g.

Although the phones are quite chunky and the 6.77” screen diagonal might sound big – a lot of that screen real estate is actually curved, and the actual phones are only 71mm wide, making them factually smaller than many other flagship devices out there. It seems was able to maintain a very reasonable device footprint and battery capacity through the increased device thickness. 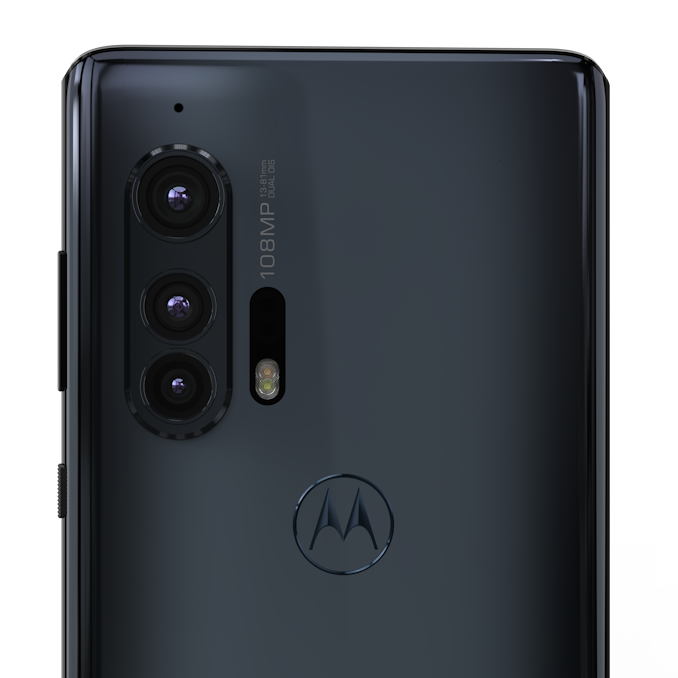 On the camera side, the edge+ comes with a 108MP main camera sensor. There’s not too much mystery as to what module we could be talking about here as there’s only one such unit being offered on the market and that’s Samsung’s HMX sensor. This is a quad-bayer unit similar to that of Xiaomi’s devices, meaning it does pixel binning down to 27MP and a resulting effective pixel pitch of 1.6µm. The optics here are f/1.8 and feature OIS.

Motorola advertises 6K video recording which is an interesting alternative to 8K that we’ve seen from Samsung on a similar sensor. In theory the edge+ would be able to support this mode whilst in the quad-bayer binning setup without too much of a crop of the sensor, probably resulting in something more useful than the S20 Ultra’s 8K video mode.

As secondary sensors, we’re seeing a 16MP ultra-wide angle module with f/2.2 optics, as well as a 3x optical telephoto module at 8MP and a f/2.4 aperture with OIS. There’s also a ToF sensor that’s only included in the edge+. 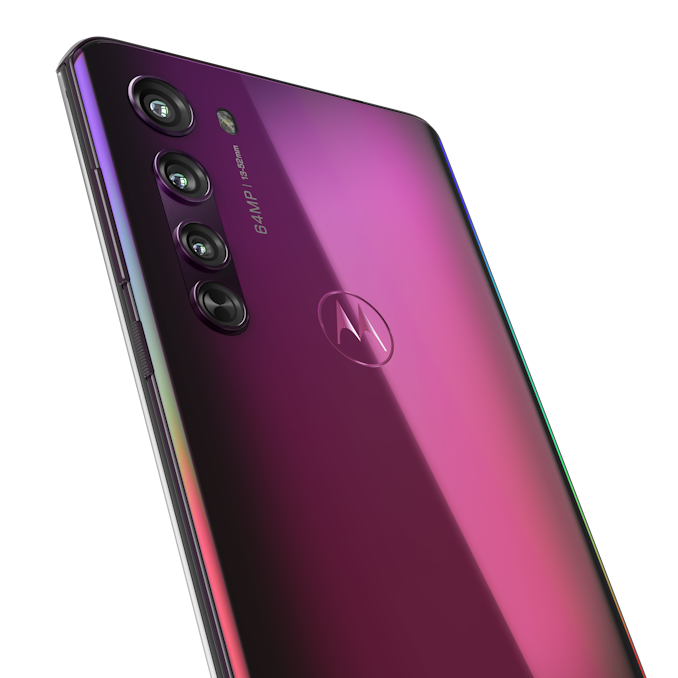 The regular edge shares the same ultra-wide and telephoto module as the edge+, but trades in the 108MP sensor in favour of a 64MP unit. This is still a large format sensor at 1/1.72” and 0.8µm pitch pixels, in a quad-bayer setup that bins regular pictures to 16MP and an effective 1.6µm pixel pitch. The aperture here is also f/1.8 and the unit comes with OIS.

Motorola had come to its senses last year by reintroducing the headphone jack in the Z4, and the two new edge phones also feature the jack – making them, alongside with LG and now Sony, one of the rare flagship devices in 2020 still sporting it.

Other differences between the two units are for example the lack of Wi-Fi 6 (802.11ax) on the regular edge, as well as a lower IP54 rating whereas the edge+ doesn’t compromise things and sports an IP68 rating. The dual-SIM support of the smaller edge is an advantage of the single-SIM setup of the edge+, but that’s likely due to the differences in target markets for both devices.

For now, we don’t have any information about launch plans of the regular edge in the US (It's said we'll only see it later in the summer), seemingly for now this variant of the phone is only meant for other markets such as Europe, and the starting price of here is extremely reasonable at 699€.

The edge+ in Europe costs a more whopping 1199€ which really blows the budget beyond what we’re used to from Motorola phones – but of course we’re also getting an essentially no-compromise device.

In the US, the edge+ is exclusive to Verizon and comes with mmWave capabilities for $41.66 a month for 24 months, corresponding to $999.99 retail. Availability starts May 14th.