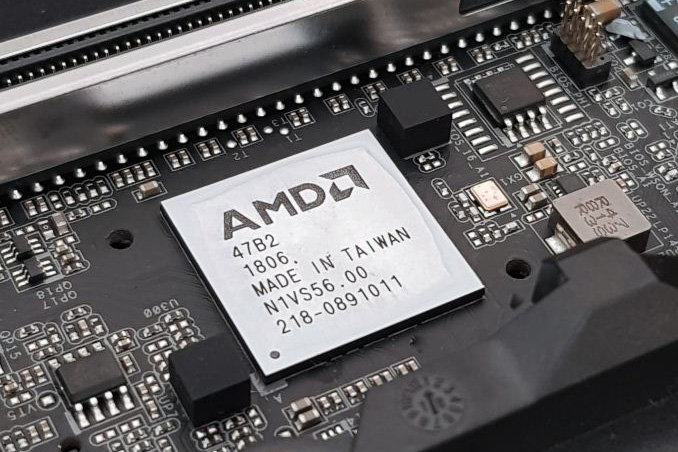 In a surprising twist, AMD has today announced that it intends to enable Ryzen 4000 and Zen 3 support on its older B450 and X470 Motherboards. This is going to be a ‘promise now, figure out the details later’ arrangement, but this should enable most (if not all) users running 400 series AMD motherboards to upgrade to the Zen 3 processors set to be unveiled later this year.

When AMD launched the Ryzen 3 3300X and Ryzen 3 3100 processors, it also gave users details about the upcoming B550 chipset that these processors were targeted for. Part of that announcement included a chart, showing how due to BIOS limitations, certain chipsets would only support certain AM4 processors. X570, for example, would support previous Ryzen 2000, current Ryzen 3000, and future Ryzen 4000 processors – it did not support the original Ryzen 1000 processors.

On that chart, it was noted almost immediately that there was a glaring omission. AMD’s B450 and X470 motherboards were listed as supporting Ryzen 1000/2000/3000, but not the future Zen3-based Ryzen 4000 processors. This made a number of users immediately very concerned, especially if they had purchased a B450 or X470 motherboard with a Ryzen 3000 processor with the hopes to upgrade it in the future.

AMD came under a lot of fire. The company had originally promised that it would support the AM4 platform from 2016 through 2020 (or ‘through to’ 2020). A lot of users had assumed that this meant any AM4 platform based motherboard would be able to accept any processor made from 2016 to 2020, including the new Zen 3 processors set to be unveiled later this year. The fact that there was a discrepancy between what the users expected and what AMD had been saying essentially became a miscommunication or a misunderstanding, but one that had a negative effect on a number of users who were expecting to upgrade the system.

Ultimately the reason for the lockout was down to the BIOS size. Each generation of processors require a portion of the BIOS space for compatibility code – normally if you can support one processor from a generation, then you can support them all. We are also in the era of graphical interface BIOSes, and as a result some of the BIOS code was reserved for fancy menus and the ability to adjust fan curves or update the BIOS in a more intuitive way. All of this takes up space, and some vendors ditched the fancy graphics in order to support more processors.

Most AMD motherboards are outfitted with 128 megabit (16 megabyte) BIOS chips. The reason why this is the case is due to a limitation on some of AMD’s early AM4 processors – due to design, they can only ever address the first 16 megabytes of a BIOS chip. So even if a motherboard vendor had a larger BIOS chip, say MSI had a 32 megabyte chip, then it would actually operate like two partitioned BIOSes and it would get very complicated. There is no easy way to support every AM4 processor with a simple 16 megabyte BIOS.

By our estimate there are 84/86 current processors on the AM4 platform in total, counting Ryzen Pro parts as well. These are set across several families (A-Series, Zen, Zen APU, Zen+, Zen+ APU, Zen2, Zen2 APU, etc), each with their own AGESA platform to deal with, which all has to go into the BIOS. This is what makes it such a tight squeeze.

As a result AMD initially made the decision that the B450/X470 motherboards would support the Ryzen 1000, Ryzen 2000, and Ryzen 3000 processors, but would not be able to support any more due to this limit. AMD ultimately wanted the 500-series chipsets, the B550/X570, to be a launchpad for the future Ryzen processors.

AMD today is reversing its decision to limit the BIOSes on the 400-series chipsets. To cut a long story short, the TL;DR mantra from AMD is:

‘We’ve heard our audience, and we understand the concerns. We are going to work out a way to support Zen 3 on our 400-series chipsets between now and launch – we’re still working out the what and the how, but we will update you closer to Zen 3 launch’.

They are acknowledging that they perhaps misread the situation from its user base. Part of this issue stems from an old CPU line not having the growth room, and the believed that pushing support for Zen 3 to the 500-series wouldn’t be that big of an issue. Now that they see it is, they will try to make it work. They will attempt to address the technical challenges, and even though they do not have all the details at this time, it will be worked on.

There is still 6+ months (?) until we see Zen 3, so they do have a lot of time to try things and to test things.

In conversations with AMD, we also discovered more insight into what this entails.

As most motherboards have 16 MB, and the CPUs can only address the first 16 MB of a BIOS chip, then we might see an issue where 400-series motherboards may end up having two ‘forked’ BIOSes – one for ‘up to Ryzen 3000 inclusive’ and one for ‘Ryzen 3000 and beyond’. The former one will likely be a default BIOS, which will be picked up by auto-update software, however the latter will likely always be a Beta BIOS, and it will require user intervention.

AMD will enable the ODM partners with the feature – partners like ASUS, GIGABYTE, Dell, HP, MSI, Lenovo, etc. However, it will be up to the ODM partner to actually enable it as a feature for their motherboard or pre-built system. If they’re not willing to complicate matters with this BIOS fork, then unfortunately you are out of luck. It is believed however that if most of the vendors are onboard straightaway, then the rest will follow. AMD will be offering continual support to its ODM partners on this, especially those with auto-update software.

There might be a situation where moving up to the beta BIOS fork will make the system unable to downgrade. It might end up being a one-way solution. It might even be a hard changeover – with the mainline supporting 3000 and below, and the fork 4000 and up. In this event, I asked AMD if they would be expanding the Boot Kit program as they did with Ryzen 2000, and lending CPUs to users that needed them to update. AMD stated that this might be a possibility, but they haven’t worked on those details at this time.

AMD reiterated to AnandTech that after the launch of B550 into the market, they do recommend the B550 motherboards as the best option for Ryzen 4000 support in upgrades. However they will be working towards supporting Ryzen 4000 on 400-series chipsets for current users in that market, and to enable customers who want to go along that upgrade path. It is worth reiterating that even with Zen 3 CPU support, B450/X470 boards will likely be limited to PCIe 3.0 due to the design.

AMD also re-confirmed that we are set to see Zen 3 processors in 2020.

AMD's full press release is given below.

As we head into our upcoming “Zen 3” architecture, there are considerable technical challenges that face a CPU socket as long-lived as AMD Socket AM4. For example, we recently announced that we would not support “Zen 3” on AMD 400 Series motherboards due to serious constraints in SPI ROM capacities in most of the AMD 400 Series motherboards. This is not the first time a technical hurdle has come up with Socket AM4 given the longevity of this socket, but it is the first time our enthusiasts have faced such a hurdle.

Over the past week, we closely reviewed your feedback on that news: we watched every video, read every comment and saw every Tweet. We hear that many of you hoped a longer upgrade path. We hear your hope that AMD B450 and X470 chipsets would carry you into the “Zen 3” era.

Our experience has been that large-scale BIOS upgrades can be difficult and confusing especially as processors come on and off the support lists. As the community of Socket AM4 customers has grown over the past three years, our intention was to take a path forward that provides the safest upgrade experience for the largest number of users. However, we hear you loud and clear when you tell us you would like to see B450 or X470 boards extended to the next generation “Zen 3” products.

As the team weighed your feedback against the technical challenges we face, we decided to change course. As a result, we will enable an upgrade path for B450 and X470 customers that adds support for next-gen AMD Ryzen™ Processors with the “Zen 3” architecture. This decision is very fresh, but here is a first look at how the upgrade path is expected to work for customers of these motherboards.

There are still many details to iron out, but we’ve already started the necessary planning. As we get closer to the launch of this upgrade path, you should expect another blog just like this to provide the remaining details and a walkthrough of the specific process.

At CES 2017, AMD made a commitment: we would support AMD Socket AM4 until 2020. We’ve spent the next three years working very hard to fulfill that promise across four architectures, plus pioneering use of new technologies like chiplets and PCIe® Gen 4. Thanks to your feedback, we are now set to bring “Zen 3” to the AMD 400 Series chipsets. We’re grateful for your passion and support of AMD’s products and technologies.