One of the things that makes the Thunder line-up stand out from the competition is its inclusion of 4-way SMT, meaning that each core can execute up to 4 threads. 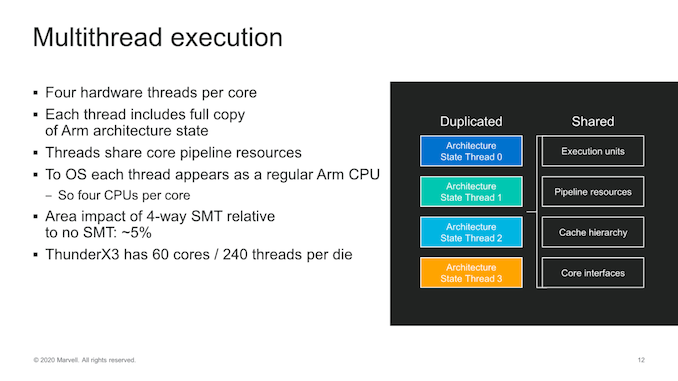 Each thread is viewed from the OS as a fully independent CPU and each has its own independent Arm architecture state, sharing the vast majority of the core’s resources bar a very few exceptions such as the aforementioned Skid Buffer.

The microarchitecture had always been multi-threaded, but Marvell went ahead to re-account for the area impact of SMT and discloses that it only takes about 5% of a core. 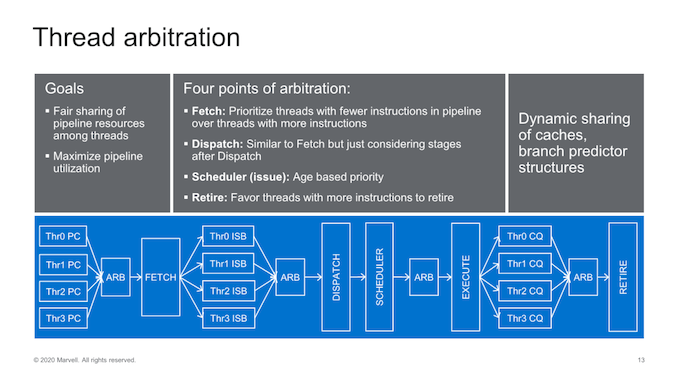 The company further details some of the mechanisms of its SMT, such as its arbitration mechanism between threads. During the fetch stage for example, the core will pick the thread which currently has the least amount of instructions live in the core’s pipelines, ensuring that the number of micro-ops and instructions further down the pipeline are balanced between the threads. We see a similar logic in the dispatch stage, and the thread with the fewest instructions downstream in the pipeline is picked out of the Skid Buffer.

The back-end has no notion of threads and simply executes the micro-ops which are oldest first. Retiring happens with priority in regards to the threads that have most backed up instructions for retiring.

Marvell says that this thread arbitrations works quite well on most codes, with the execution latencies between threads being quite uniform. 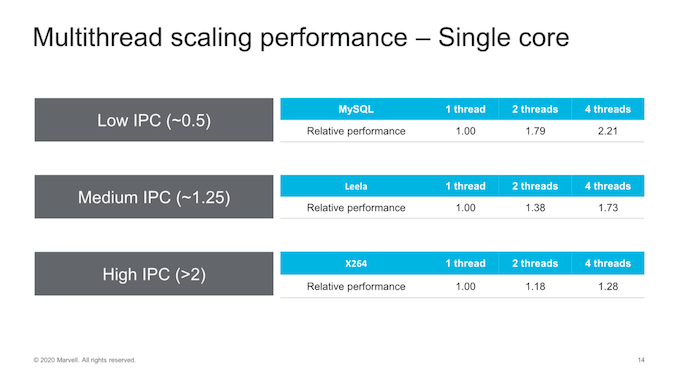 The speed-up that SMT can bring to the table is reversely correlated with the IPC of a given workload, meaning that a low IPC workload will see the biggest improvements with SMT. Other way to describe this is data-plane centric workloads which have a high latency to data fetching for execution are better suited to hide these kind of bottlenecks and idle-periods of the core through SMT.

Low-IPC workloads such as databases see a quite big gain in IPC and performance reaching up to 2x for 4 threads. Higher IPC workloads with a smaller data footprint will see more limited benefit to IPC. 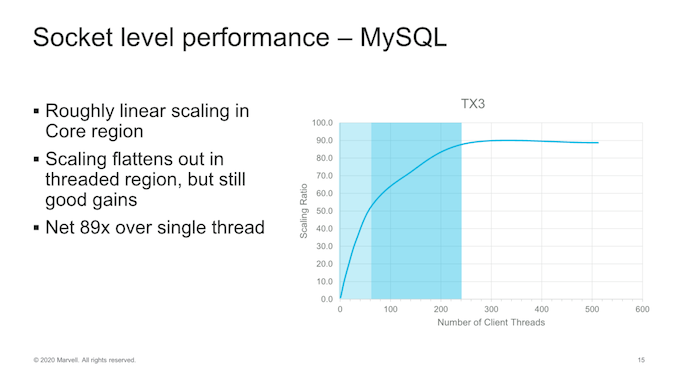 Translating this to socket-level performance, we see a great scaling up to 60 cores which is essentially the physical core count of the processor, and a more sub-linear, but still quite respectable scaling up to 240 threads. Performance from 60 to 240 threads increases by roughly 60% which is a nice gain considering the very low area impact of SMT4 on Marvell’s cores. 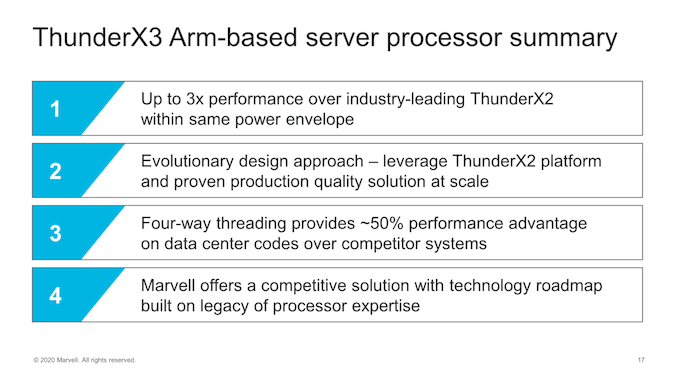 When asked about how its ThudnerX3 is positioned against the competition, Marvell says that against Intel based products the company will slightly lag behind in single-thread performance, but will offer vastly greater multi-threaded throughput. Against AMD (we assume Rome), the TX3 is said to perform better in single-threaded performance with AMD taking the lead in workloads with low data sharing, although the TX3 to do better in workloads with more data-sharing such as database applications. Graviton2 is said to be a very good chip, although it offered low frequency and no threading support, so those are the areas the TX3 would be better in.

Overall, the TX3 seems like a solid candidate in the current server space, however I don’t feel like it differentiates itself very much aside from the fact that it offers SMT support. I feel like the CPU’s microarchitecture is still quite narrow, and although the IPC improvements are generationally good, Marvell also has significantly longer time between releases than Arm. In that regard, only slightly beating the Graviton2 here doesn’t seem enough and I do expect Altra-based designs to be faster.

We’ll have to see how the ThunderX3 ends up in terms of performance and power efficiency, but aside from dataplane heavy workloads that can fully take advantage of SMT, I feel like it might be a too close for comfort race for Marvell. For the consumer and enterprises, it’s exciting either way as this means we’ll have a ton of viable options in the near future.