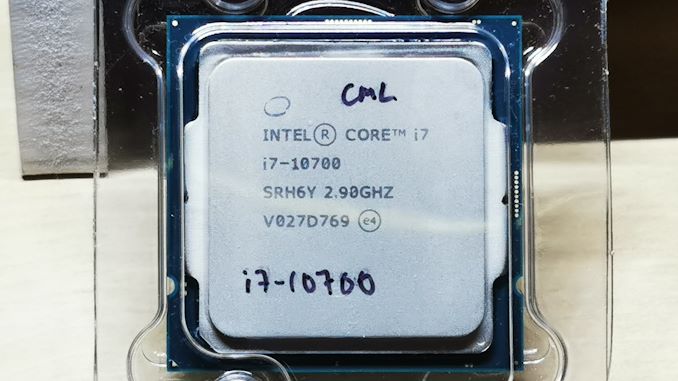 Over the years, Intel’s consumer processor lineup has featured its usual array of overclocking ‘K’ models, and more recently the ‘F’ series that come without integrated graphics. The bulk of the lineup however are still the versions without a suffix, the ‘nones’, like the Core i7-10700 in this review. These processors sit in the middle of the road, almost always having a 65 W TDP compared to the 91-125 W overclockable models, but also having integrated graphics, unlike the F family. What makes it interesting is when we pair one of these 65 W parts against its 125 W overclocking counterpart, and if the extra base and turbo frequency boost is actually worth the money in an era where motherboards don't seem to care about power?

The understanding of the way that Intel references its TDP (thermal design point) values has gone through a mini-revolution in the last few years. We have had an almost-decade of quad-core processors at around 90 W and 65 W, and most of them would never reached these numbers even under turbo modes - for example, the Core i5-6600K was rated at 91 W, but peak power draw was only 83 W. This has been the norm for a while, until recently when Intel had to start boosting the core count. As we have slowly gone up in core count, from 4 to 6 to 8 and now 10, these numbers have seemed almost arbitrary for a while.

The reason comes down to what TDP really is. In the past, we used to assume that it was the peak power consumption of the processor was its TDP rating – after all, a ‘thermal design point’ of a processor was almost worthless if you didn’t account for the peak power dissipation. What makes Intel’s situation different (or confusing, depending on how you want to call it) is that the company defines its TDP in the context of a 'base' frequency. The TDP will be the maximum power under a sustained workload for which the base frequency is the minimum frequency guarantee. Intel defines a sustained workload one in which the 'turbo budget' has expired, and the processor will achieve its best frequency above base frequency (but not turbo modes) .

The point about ‘not turbo’ is the key element here. Intel’s TDP ratings are only in effect for the base frequency, not the turbo frequency. If a PC is built with a maximum power dissipation in mind, allowing a processor to turbo above that power might have catastrophic consequences for the thermal performance of that system. The other angle is that Intel never quotes the turbo power levels (also known as Power Level 2, or PL2) alongside the other specifications, although they are technically in the specification documents when they get released. 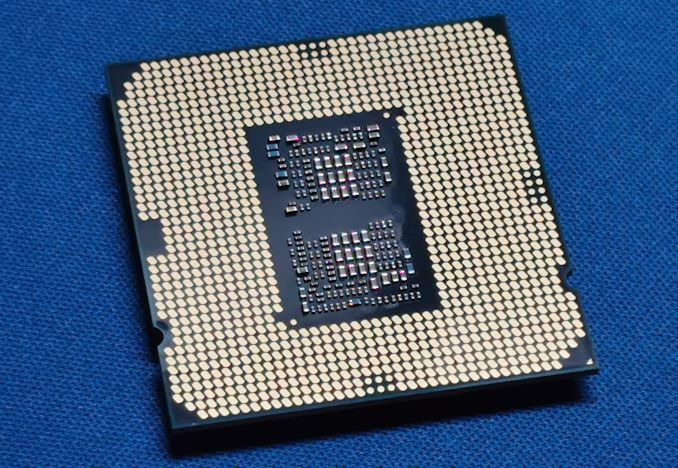 So why does all this matter with respect for this review? Well my key comparison in this review is our new processor, the Core i7-10700, up against its overclocking counterpart, the Core i7-10700K. Aside from the suffix difference, the K variant has a TDP almost twice as high, and this manifests almost entirely in the base frequency difference.

The base frequency is more of a minimum guaranteed frequency, than an absolute 'this is what you will get' value under a sustained workload. Intel likes to state that the base frequency is the guarantee, however if a processor can achieve a higher frequency while power limited, it will - if it can achieve that power value with 200 MHz above base frequency, it will run at the higher frequency. If this sounds familiar, this is how all AMD Ryzen processors work, however Intel only implements it when turbo is no longer available. This ends up being very processor dependent.

For the turbo, as mentioned, Intel has recommendations for power levels and turbo time in its documentation, however OEMs and motherboard manufacturers are free to routinely ignore it. This is no more obvious than when comparing these two processors. What does this mean for end-users? Well, graphs like this.

First time I saw these numbers, it shocked me. Why is this cheaper, and supposedly less powerful version of this silicon running at a higher turbo power in a standard off-the-shelf Intel Z490 motherboard?

Welcome to our review. There’s going to be a lot of discussion on the page where we talk about power, frequency, and the quality of the silicon. Also when it comes to benchmarking, because if we were to take an extreme view of everything, then benchmarking is pointless and I'm out of a job.

The Core i7-10700 and Core i7-10700K are both members of Intel’s 10th Generation ‘Comet Lake’ Core i7 family. This means they are based on Intel’s latest 14nm process variant (14+++, we think, Intel stopped telling us outright), but are essentially power and frequency optimized versions of Intel’s 6th Generation Skylake Core, except we get eight cores rather than four.

Both CPUs are rated to run dual channel memory at DDR4-2933 speeds, and have 16 PCIe 3.0 lanes with support for Intel 400-series chipsets. These are socket LGA1200 processors, and are incompatible with other LGA115x motherboards. 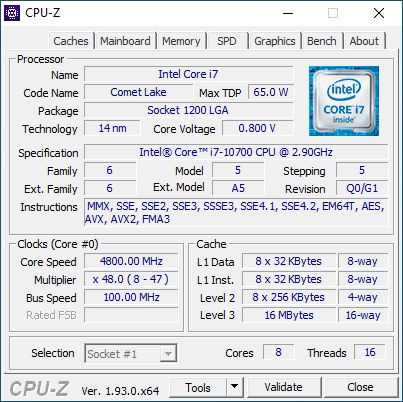 Aside from the power and frequency differences, the other one is the price: $335 MSRP for the Core i7-10700, and $387 MSRP for the Core i7-10700K. This is a +$52 difference, which is designed to enable better frequencies and overclocking on the K processor. The non-K processor may be shipped with Intel’s 65 W PCG-2015C thermal solution, depending on location, although the first thing you would want to do is to buy something/anything else to cool the processor with given that it'll peak at 215W in enthusiast systems.

On the competing side from AMD, the nearest solution is the Ryzen 5 5600X, a 65W version of Zen 3 with two fewer cores but higher IPC, with an MSRP of $300. This does come with a reasonably good default cooler. Our full review of the Ryzen 5 5600X can be found here.

The goal of this review was initially just to benchmark the Core i7-10700 and see where it fits into the market. As our testing results came into focus, it was clear that we had an interesting comparison on our hands against the Core i7-10700K, which we have also tested. In this review the focus will be on the difference between the two, focusing primarily on where the i7-10700 lands compared to the competition, and perhaps some of the complexities involved.

As per our processor testing policy, we take a premium category motherboard suitable for the socket, and equip the system with a suitable amount of memory running at the manufacturer's maximum supported frequency. This is also typically run at JEDEC subtimings where possible. It is noted that some users are not keen on this policy, stating that sometimes the maximum supported frequency is quite low, or faster memory is available at a similar price, or that the JEDEC speeds can be prohibitive for performance. While these comments make sense, ultimately very few users apply memory profiles (either XMP or other) as they require interaction with the BIOS, and most users will fall back on JEDEC supported speeds - this includes home users as well as industry who might want to shave off a cent or two from the cost or stay within the margins set by the manufacturer.

We must thank the following companies for kindly providing hardware for our multiple test beds. Some of this hardware is not in this test bed specifically, but is used in other testing.

A big thanks to ADATA for the ​AD4U3200716G22-SGN modules for this review. They're currently the backbone of our AMD testing.

Users interested in the details of our current CPU benchmark suite can refer to our #CPUOverload article which covers the topics of benchmark automation as well as what our suite runs and why. We also benchmark much more data than is shown in a typical review, all of which you can see in our benchmark database. We call it ‘Bench’, and there’s also a link on the top of the website in case you need it for processor comparison in the future.

If anyone is wondering why I've written the SKU of the processor on it with a sharpie, as per our lead image, it's because when you're shuffling through a box of them in low light, what is printed on the headspreader can be difficult to read if the light isn't right. With a perminent marker, it makes it much easier to read at-a-glance.

Read on for our full review.