A couple of days after Intel officially announced its 11th Generation Core Rocket Lake, the press received an email about a new feature coming to the platform that wasn’t in our original briefing. The goal of this feature is to provide more performance to users that have good processors, and Intel is calling it Adaptive Boost Technology.

Adaptive Boost Technology is now the fifth frequency metric Intel uses on its high-end enthusiast grade processors, and another element in Intel’s ever complex ‘Turbo’ family of features. Here’s the list, in case we forget one:

Intel provided a slide trying to describe the new ABT, however the diagram is a bit of a mess and doesn’t explain it that well. Here’s the handy AnandTech version.

First up is the Core i7-11700K that AnandTech has already reviewed. This processor has TB2, TBM3, but not TVB or ABT. 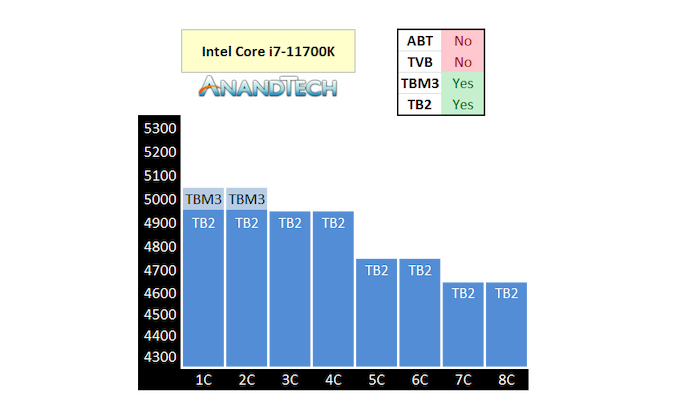 The official specifications show that when one to four cores are loaded, when in turbo mode, it will boost to 4.9 GHz. If it is under two cores, the OS will shift the threads onto the favored cores and Turbo Boost Max 3.0 will kick in for 5.0 GHz. More than four core loading will be distributed as above.

On the Core i9-11900, the non-overclocking version, we also get Thermal Velocity Boost which adds another +100 MHz onto every core max turbo, but only if the processor is below 70ºC. 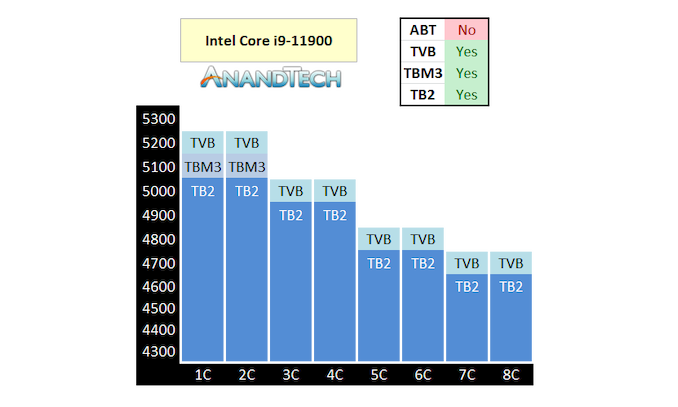 We can see here that the first two cores get both TBM3 (favored core) as well as TVB, which makes those two cores give a bigger jump. In this case, if all eight cores are loaded, the turbo is 4.6 GHz, unless the CPU is under 70ºC, then we get an all-core turbo of 4.7 GHz.

Now move up to the Core i9-11900K or Core i9-11900KF, which are the only two processors with the new floating turbo / Adaptive Boost Technology. Everything beyond two cores changes and TVB no longer applies. 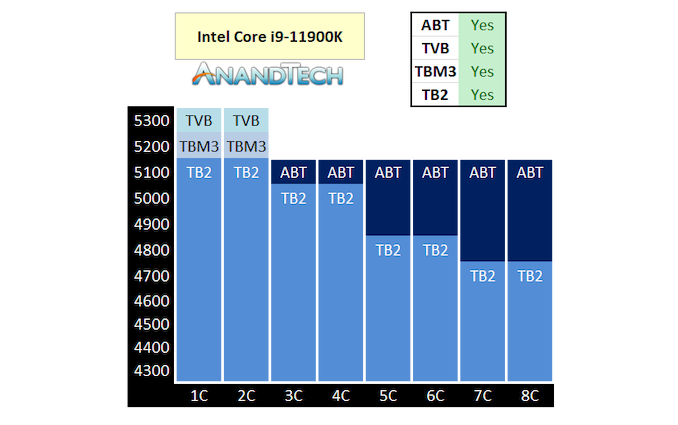 Here we see what looks like a 5.1 GHz all-core turbo, from three cores to eight cores loaded. This is +300 MHz above TVB when all eight cores are loaded. But the reason why I’m calling this a floating turbo is because it is opportunistic.

What this means is that, if all 8 cores are loaded, TB2 means that it will run at 4.7 GHz. If there is power budget and thermal budget, it will attempt 4.8 GHz. If there is more power budget and thermal budget available, it will go to 4.9 GHz, then 5.0 GHz, then 5.1 GHz. The frequency will float as long as it has enough of those budgets to play with, and it will increase/decrease as necessary. This is important as different instructions cause different amounts of power draw and such.

If this sounds familiar, you are not wrong. AMD does the same thing, and they call it Precision Boost 2, and it was introduced in April 2018 with Zen+. 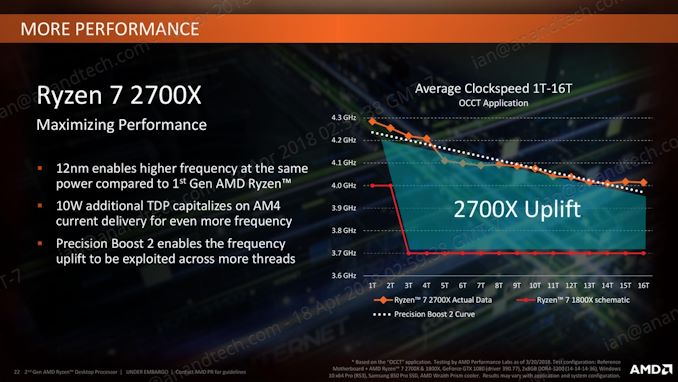 One of the things that we noticed with AMD however is that this floating turbo does increase power draw, especially with AVX/AVX2 workloads. Intel is likely going to see similar increases in power draw. What might be a small saving grace here is that Intel’s frequency jumps are still limited to full 100 MHz steps, whereas AMD can do it on the 25 MHz boundary. This means that Intel has to manage larger steps, and will likely only cross that boundary if it knows it can be maintained for a fixed amount of time. It will be interesting to see if Intel gives the user the ability to change those entry/exit points for Adaptive Boost Technology.

The other difference is that for now, ABT on Intel is disabled by default. Users will have to enable it in their BIOSes to take advantage. On that scale, I suspect most won't, simply because most do not enter the BIOS. Enthusiasts might, however they might also decide to overclock, which makes ABT moot. The other alternative is that motherboard vendors will enable it by default anyway, simply because Intel says it is within specfication.

It’s a bit odd that Intel decided to talk about this feature two days after the official Rocket Lake announcement, to the point that BIOSes enabling ABT are only being distributed now (this doesn’t affect our Core i7-11700K review). This indicates that perhaps the feature wasn’t ready in time for the announcement, or even, ready to go and Intel was still debating whether to actually make it a feature? Then again, all of the Z590 motherboards that we’ve seen seem overbuilt for this generation of processors – Z590 starts at $175, which used to be a mid-market price, so something like ABT should be ready to go. It does make me wonder if ABT is applicable for B560 motherboards, or if it will be a Z590 only feature. Intel has stated that ABT is within warranty and not considered overclocking.

There will be some users who are already familiar with Multi-Core Enhancement / Multi-Core Turbo. This is a feature from some motherboard vendors have, and often enable at default, which lets a processor reach an all-core turbo equal to the single core turbo. That is somewhat similar to ABT, but that was more of a fixed frequency, whereas ABT is a floating turbo design. That being said, some motherboard vendors might still have Multi-Core Enhancement as part of their design anyway, bypassing ABT.

Overall, it’s a performance plus. It makes sense for the users that can also manage the thermals. AMD's implementation allowed it to get additional performance when it moved to TSMC’s 7nm. I have a feeling that Intel will have to shift to a new manufacturing node to get the best out of ABT, and we might see the feature on the more mainstream CPUs.