There are two camps when it comes to gaming notebook design. One group of buyers wants to RGB all the things, and the other prefers a stealthier approach to the design philosophy. ASUS has certainly gone with the former with the Strix G513QY. The big, shiny ROG logo on the top of the notebook, coupled with a bright red accent piece, and RGB Aura lighting around the front, most certainly let everyone know that this is a system for gaming first.

One of the most interesting aspects of the design is the red accent piece on the top left corner. ASUS allows it to be removed, and ships the system with both a chrome, and a translucent black accent, allowing the owner to change it up if they don’t love the red. That’s a nice bit of customization, and although it does not add a lot of the cost of the system, it lets the owner put their own touch on the design.

ASUS also offers incredibly thin 4.5 mm bezels for a 15.6-inch gaming notebook, which really shrinks the form factor down. Unfortunately, as previously mentioned, they did this at the expense of a webcam. They are not the first to do this, but it is an omission that is not ideal, especially in today’s world. Having to buy and use an external webcam with a notebook is a bit of a shame. The hinges are offset from the rear, allowing the laptop chassis to be a bit longer than the display. This prevents the bottom bezel from being extra large, while still allowing the room inside the chassis for cooling components.

One not so great aspect to the design is the finish. ASUS has gone with a matte black finish, and while it does look great, it does pick up fingerprints exceptionally easily. Immediately after opening this review unit, it looked like it had been used for weeks. The design touches, such as the ROG pattern on the keyboard deck, look good, but will be quickly marred by fingerprints and oils. 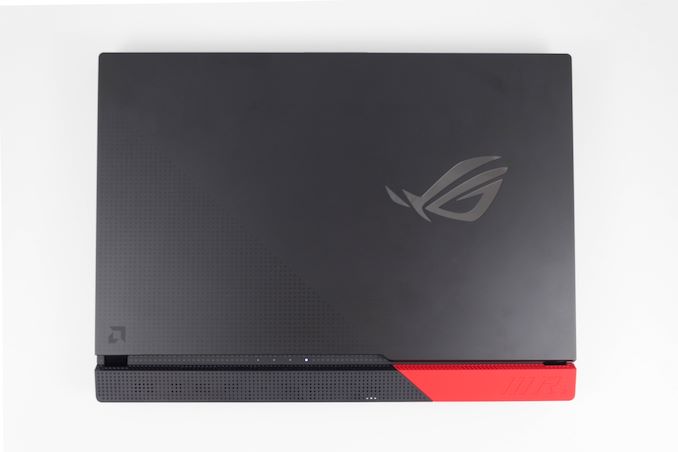 Moving on to the keyboard, there is a lot to like here. ASUS leverages ROG Overstroke technology, which registers the key press earlier in the stroke compared to a traditional laptop scissor switch, and this makes the keyboard more responsive. For professional gamers, this may make a difference in gaming, but regardless, they keys work very well, and they offer a smooth key press, with great feedback. They key caps provide a slight bit of traction as well, making your fingers press the keys with a bit more ease. This is an excellent keyboard.

Keyboard lighting, at least on this model is four zone RGB, which is always a bit odd. Per-key RGB allows the user to set certain keys to a certain color, making them easier to find, but four zone is always a strange looking effect. You can of course set it to just a single color, or using the included software, cycle through a variety of not always successful strobe effects, if you prefer. The WASD keys are a transparent plastic, which makes them pop quite a bit and is a nice design point. 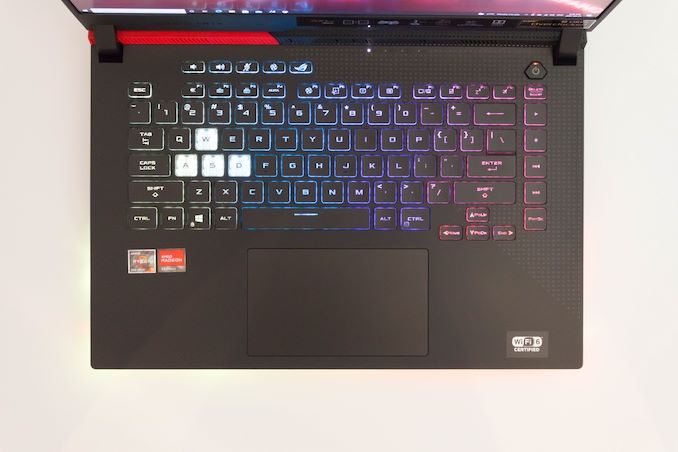 But the keyboard does not stop there. ASUS has outfitted an IR sensor under the “K” key, which monitors the temperature of the keyboard. If it is getting too toasty to use, cooling can be increased to compensate. ASUS targets a temperature under 40°C for the keys.

ASUS has increased the size of the trackpad, and it worked well in limited testing. The surface is very smooth, although like the laptop finish, it is very susceptible to fingerprints as well, so quickly looks grimy.

A lot of the I/O on the ASUS Strix G513QY is on the rear of the device, which makes cable management much easier than devices which just put the ports on the side. Power, Ethernet, HDMI, and some of the USB are on the back, while the left side just features two USB Type-A ports, and a headset jack. There are no ports on the right side, although there is a cooling vent.

Overall, the ASUS ROG Strix G513QY, despite being a mouthful to say, is a compact, well-built, and interesting design. ASUS has gone all out on the gamer look, while also allowing the owner to customize the look with lighting, and even removable accents. The design is compact thanks to the thin display bezels, and they keyboard is one of the best in any gaming notebook. The design is not perfect though. The lack of a webcam is an odd choice in the current climate, and the finish does get dirty very quickly.