The Axon 30 with Under Display Camera: Hands-on Mini-Review

Under-display cameras have been the holy grail of bezel-less display designs that every company is striving for. In the last few years, we’ve moved from camera notches, to hole-punch cameras, and today we’re seeing an increasing number of designs now attempt to commercialise the first or second-gen UDCs.

ZTE is partnering with Visionox to achieve the under-display camera implementation, a Chinese OLED panel manufacturer that we haven’t heard about too much to date. 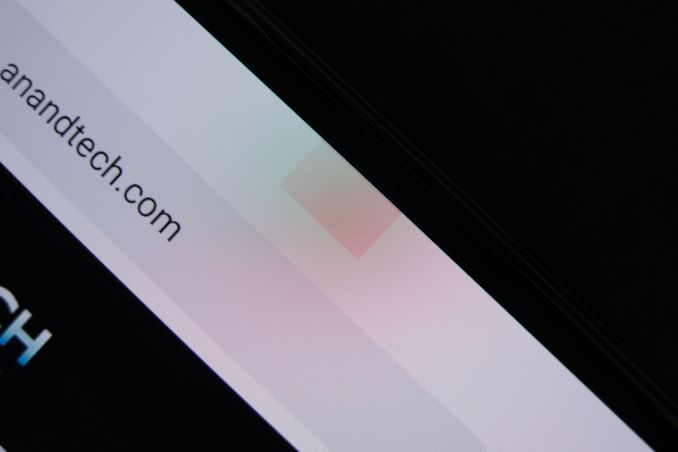 Starting off with the subjective experience: how the UDC actually looks like and how good it’s hidden beneath the display: one has to note that while the implementation is quite remarkable, it’s still not quite invisible and fully hidden away. 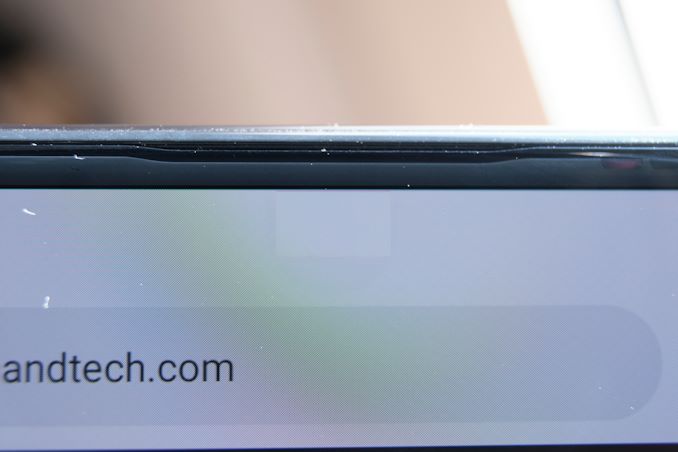 The one aspect that I think betrays the UDC the most in everyday usage, is the fact that the “transparent” pixel area of the UDC appears brighter than the regular surrounding panel. It’s not a very large difference, but it’s always there on all kinds of colours and brightness levels, but is most noticeable on white. I have to wonder if ZTE would be able to correct for this brightness delta by simply creating a software overlay here that would calibrate things back down a bit – which would seem quite easy to do. 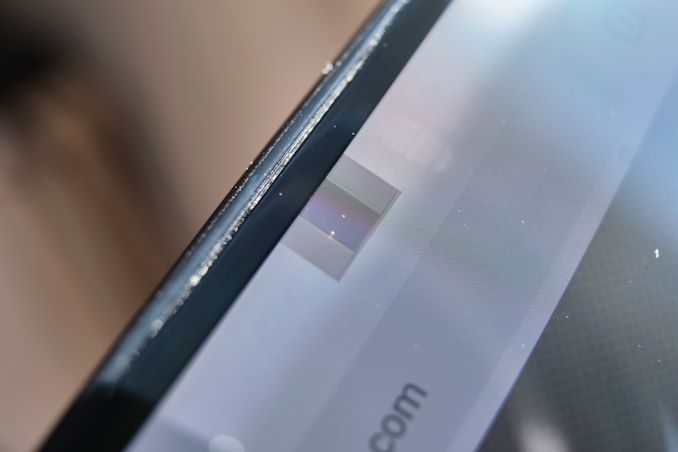 In darker scenarios, the transparent area of the panel is performing extremely well, however once the phone is in higher ambient light scenarios such as daylight, the UDC is more easily revealed. The easiest way this is visible is simply by looking at the panel from an angle, especially in sunlight. It appears here that the polarisation layer works well when the phone is looked at when in portrait mode, but has weaknesses in hiding the UDC at angles such as 45°. It’s not a practical issue, but just interesting to mention. 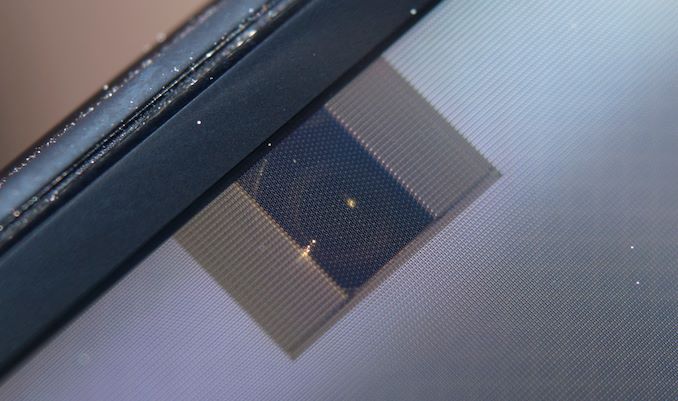 The above close-up has the panel turned off and we’re purely looking at the reflections of the underlying circuitry. Especially under a lot of light, the UDC is quite visible when the display is turned off.

What we see in terms of the circuit design is that things are extremely packed in the areas surrounding the middle “transparent” part, which only seems to have the actual OLED subpixels visible and non-transparent. Presumably what Visionox is doing is putting the supporting drive circuitry around the actual transparent panel “hole”. Unfortunately, I don’t have a microscope at hand to get a closer look at how exactly the structure here looks like.

The pixel matrix is evidently organised in vertical columns, however horizontally we see that there’s distinct repeating patterns of two different column types. 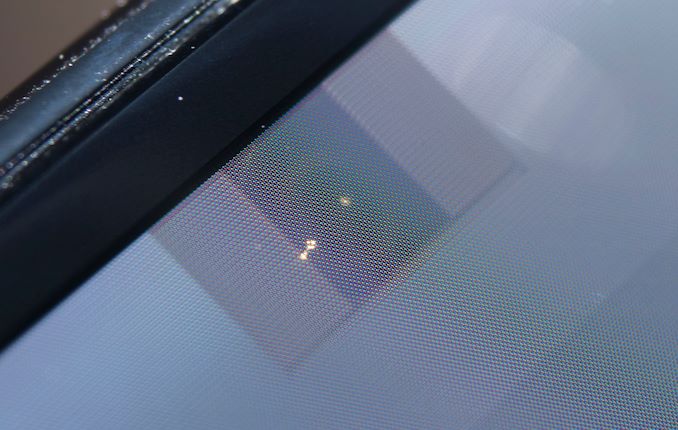 Once the panel is turned on, it becomes harder to observe the UDC as well as the general panel structure. 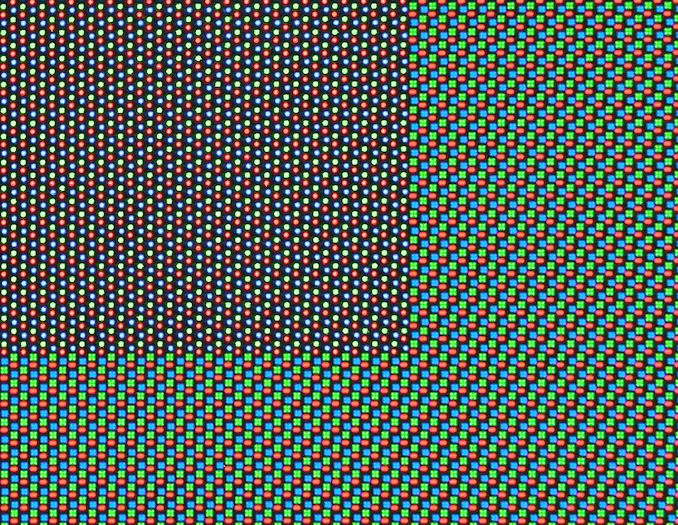 What’s quite interesting about Visionox’s panel UDC implementation is that it does not compromise on pixel density; we see the same resolution in the UDC area as on the rest of the screen. However, what does change, is the pixel fill ratio, with the UDC area having notably smaller OLED emitters compared to the regular panel. Generally, the higher the pixel fill compared to the background panel, the “smoother” a display will appear.

As we have also never seen a Visionox screen this close up, it’s also notable to remark the subpixel layout. The structure here is called a delta layout, a circumvention around Samsung’s patented diamond pentile structure that offers slightly less fill ratio and is a bit more regular (not what you want) as it appears that there’s 50°-pixel columns / non-fill gaps.

While the UDC screen quality seems to be excellent, does the lower pixel fill ratio allow enough light for the front camera to be able to properly see through? 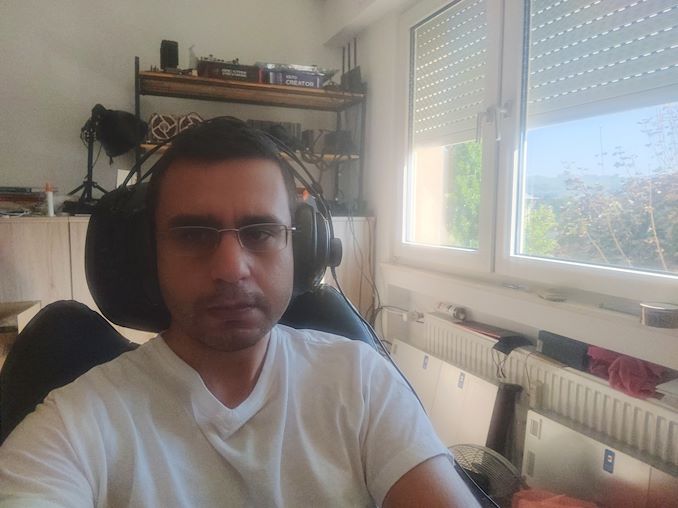 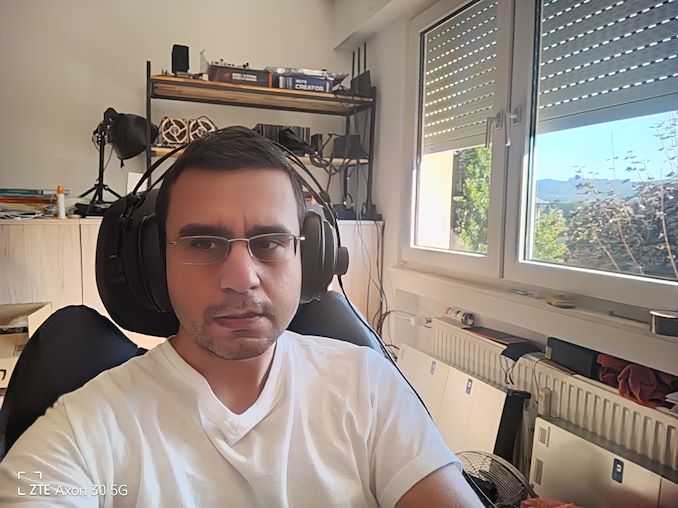 Generally, the answer is no, however ZTE is making quite extensive use of software processing to be able to attempt to recover as much information as possible, and especially to counter-act some of the large optical compromises with the UDC.

Using a third-party camera app such as OpenCamera which doesn’t use any special post-processing shows just how bad the image quality out of the raw sensor is. What’s particularly evident here is the extremely large amount of ghosting and lack of natural contrast in the image. This is particularly visible if you have any kind of light source in the field of view of the camera.

ZTE’s post-processing is quite notable when you take a picture as it takes a second or two to kick in and be applied to the shot you’ve captured. After the processing, it quite a surprisingly competent job at eliminating the light ghosting as well as increasing the contrast of the scene. What’s not so good is that there’s a very large loss of tone gradations and it’s not very competitive in terms of dynamic range.

It appears that the camera here is capturing in the 4MP mode even though the camera outputs a 16MP image. 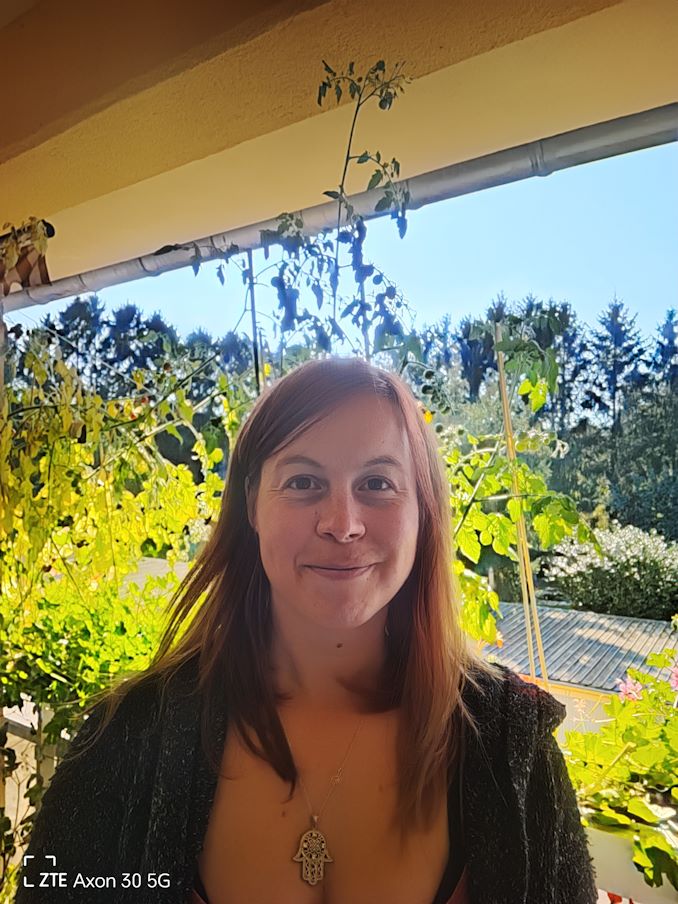 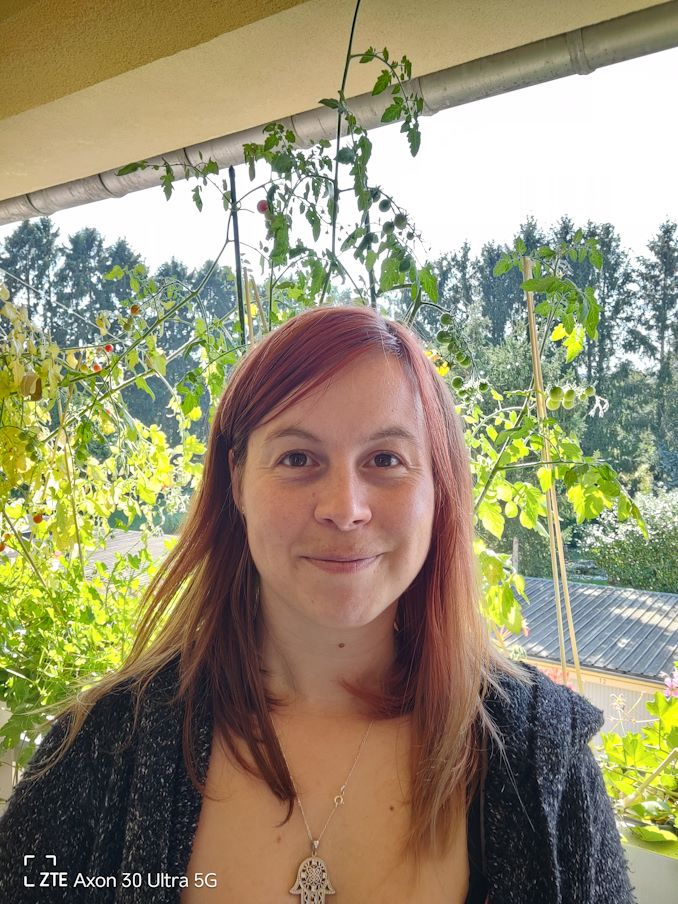 Comparing the Axon 30 versus the Axon 30 Ultra, although the UDC is faring quite well, it’s evident that it’s nowhere near the quality of a regular front-facing camera. 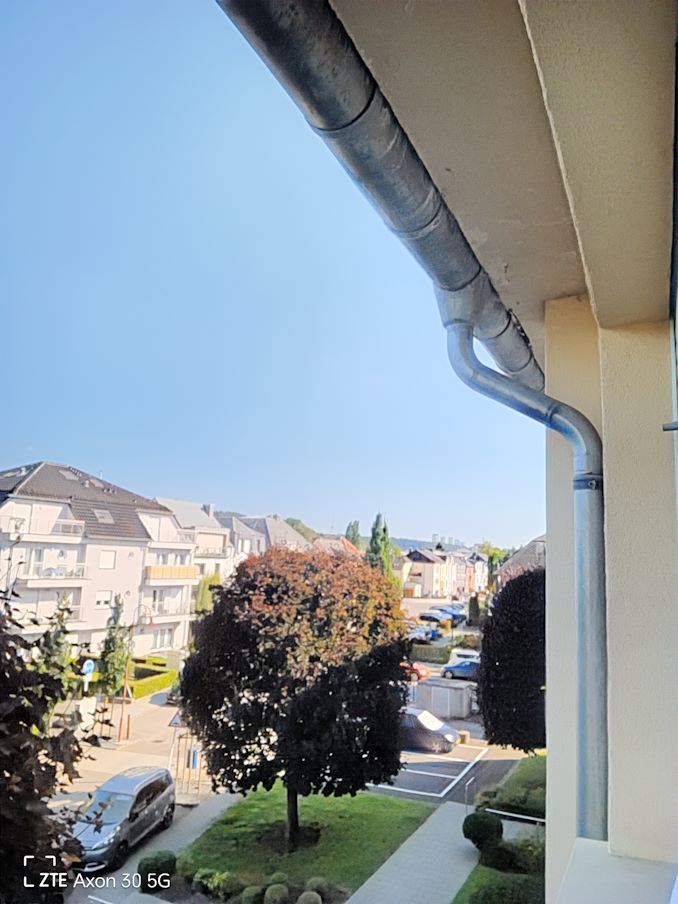 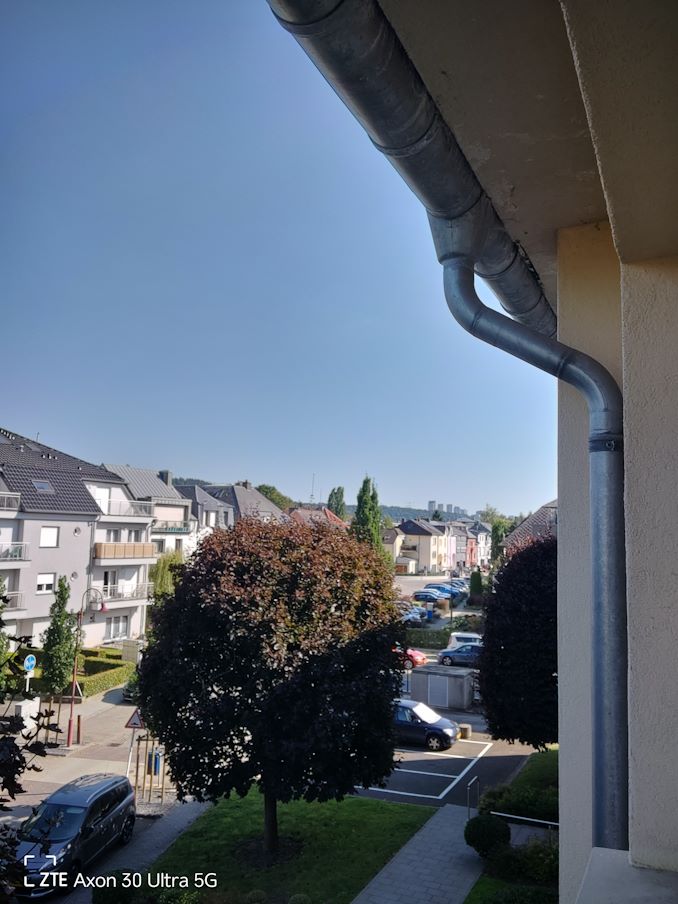 It’s mostly again the issue of what appears to be a inferior HDR implementation that is most handicapping the camera, as if it’s overexposing and then trying to reduce highlights too much, resulting in flatter tones.

Overall, the Axon 30’s key feature is interesting for people who actually do not use the front-facing camera much. The phone does a pretty good job of hiding it, and although not perfect, it’s amongst the best implementations we’ve seen to date. The camera, when needed, is still functional, however it’s clear that there’s a large quality compromise to be made when using it.