Getting the most out of Intel's Core i9-11900K primarily relies on two main factors: premium cooling for the chip itself, and a solid motherboard acting as the foundation. And while motherboard manufacturers such as EVGA can't do anything about the former, they have quite a bit of experience with the latter.

Today we're taking a look at EVGA's Z590 Dark motherboard, which is putting EVGA's experience to the test as one of a small handful of LGA1200 motherboards geared for extreme overclocking. A niche market within a niche market, few people really have the need (or the means) to overclock a processor within an inch of its life. But for those that do, EVGA has developed a well-earned reputation with its Dark series boards for pulling out all of the stops in helping overclockers get the most out of their chips. And even for the rest of us who will never see a Rocket Lake chip pass 6GHz, it's interesting to see just what it takes with regards to motherboard design and construction to get the job done.

EVGA occupies an unusual spot within the wider motherboard market. The company has eschewed low-end and mid-range motherboards entirely, opting to focus on high-end boards. Case in point: of the handful motherboards they currently offer, the major of them are Dark boards aimed at extreme overclocking.

The end result is that while EVGA doesn't make (or sell) a lot of boards, what they do make stands out. And in the case of the Dark series (and thus the Z590 Dark) that starts with outright over-engineering motherboards in order to equip them with far more (or far higher grade) components than are actually needed. For a motherboard to operate within its parameters, such as Intel default settings on processors, they don't require things like ridiculously high phase counts to achieve this. But for extreme overclocking, it's another matter. 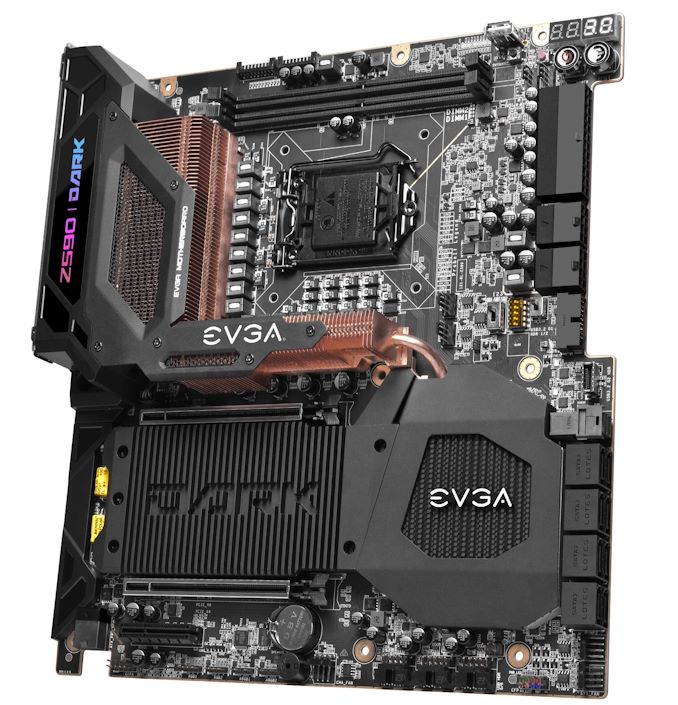 Some may say that overclocking isn't as popular as it once was, and to some degree that's true. Due to the advancements from both Intel and AMD on its methods and definitions of 'turbo' and 'boost,' it's not as fundamentally needed as it once was.

But don't tell the EVGA Z590 Dark that. Going so far as to support aggressive sub-ambient CPU cooling methods like liquid nitrogen (LN2) and dry ice (DICE), the EVGA Z590 Dark is a serious contender for those looking for maximum performance. An overclocker's toolkit is designed to make sub-zero overclocking more accessible, including dual Probelt voltage monitoring points and a dual two-digit LED debugger that can even read out current CPU VCore and temperatures.

It uses a transposed LGA1200 socket for better CPU pot mounting. Above the CPU socket is two horizontally mounted memory slots with support for DDR4-5333 out of the box and a maximum capacity of up to 64 GB, more than ample for anyone's desktop system. Other fanciful design traits include right-angled connectors, including the power connectors along the right-hand side, s |USB headers, and 4-pin fan headers.

With that said, not everything is aimed at overclocking, so the Z590 Dark includes a solid and fundamental feature set to boot. There's plenty of variety for storage with one PCIe 4.0 x4 M.2, one PCIe 3.0 x4 M.2, one PCIe 3.0 x4/SATA M.2, one rare PCIe 3.0 x4 U.2 slot, and eight SATA ports. Also present is a premium onboard audio solution and plenty of networking options with two 2.5 GbE controllers and an Intel Wi-Fi 6 CNVi. Other features include USB 3.2 G2x2 Type-C connectivity on the rear panel through native support on the Z590 chipset, while the Z590 Dark also has four USB 3.2 G2 Type-A ports. 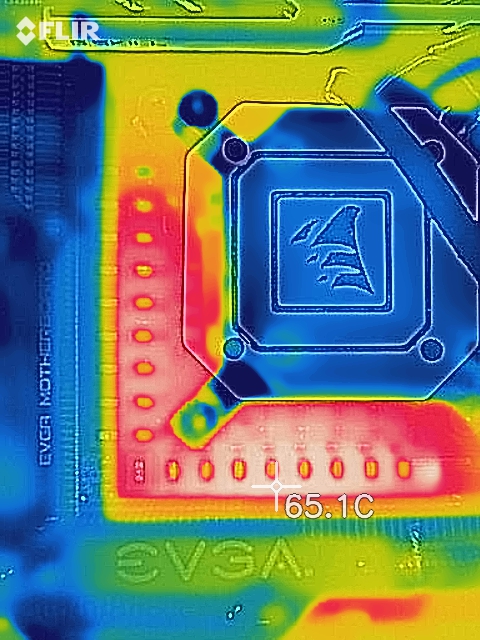 When it comes to overclocking, which the EVGA Z590 Dark is primarily designed for, we admittedly didn't see anything overly special compared to other Z590 boards – but then we "only" used a premium Corsair 360 mm AIO, rather than something more exotic. Still, the EVGA OC Robot utility built into the firmware was able to provide us with an impressive 5.4 GHz all-core stable overclock, but with a CPU VCore of 1.541 V and a whopping power draw of 497 W. Pragmatically, this overclock did run with a minus 3 offset on AVX workloads which meant it passed our POV-Ray benchmark. Still, we did see thermal throttling due to the insane amount of heat generated. Power delivery thermals were also respectable, but we would have liked to have seen better thermal performance than we got considering this board has an active cooling design.

Reflecting its high-end nature, the EVGA Z590 Dark carries a price tag of $599. And somewhat surprisingly, this isn't too outlandish for an enthusiast-grade overclocking motherboard in today's market, particularly when sizing up other high-end boards. Still, motherboards such as the MSI MEG Z590 Ace ($430) offer a much more comprehensive feature set with very competitive performance levels for users who aren't going to be applying dry ice to their CPUs. So where the Z590 Dark excels is going to be different from other high-end boards, and that's something that suits EVGA just fine.