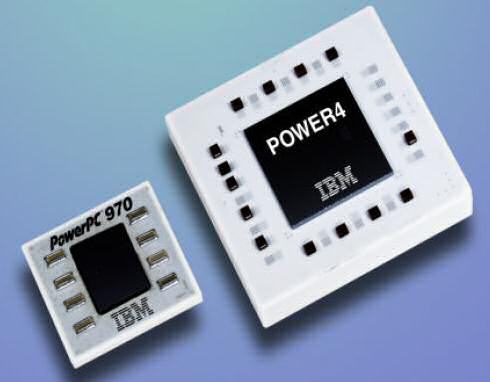 Compilers for the PowerPC 970FX should thus be able to produce code that is cleaner, with less shuffling of data between the L1-cache, "secret" rename registers and architectural registers. The end result is better performance, thanks to less "bookkeeping". Insiders say that the PowerPC970FX has less "register pressure" than, for example, the EM64T and AMD64 CPUs (16 registers), which on their turn have less register pressure than the "older" 32 bit x86 CPUs with only 8 architectural registers. Remember that most of the performance boost (10-30%) noticed in x86 64 bit programs came from the 8 extra registers available in "pure" 64 bit mode.

The 970FX is deeply pipelined, quite a bit deeper than the Athlon 64 or Opteron. While the Opteron has a 12 stage pipeline for integer calculations, the 970FX goes deeper and ends up with 16 stages. Floating point is handled through 21 stages, and the Opteron only needs 17. 21 stages might make you think that the 970FX is close to a Pentium 4 Northwood, but you should remember that the Pentium 4 also had 8 stages in front of the trace cache. The 20 stages were counted from the trace cache. So, the Pentium 4 has to do less work in those 20 stages than what the 970FX performs in those 16 or 21 stages. When it comes to branch prediction penalties, the 970FX penalty will be closer to the Pentium 4 (Northwood). But when it comes to frequency headroom, the 970FX should do - in theory - better than the Opteron, but does not come close to the "old" Pentium 4. 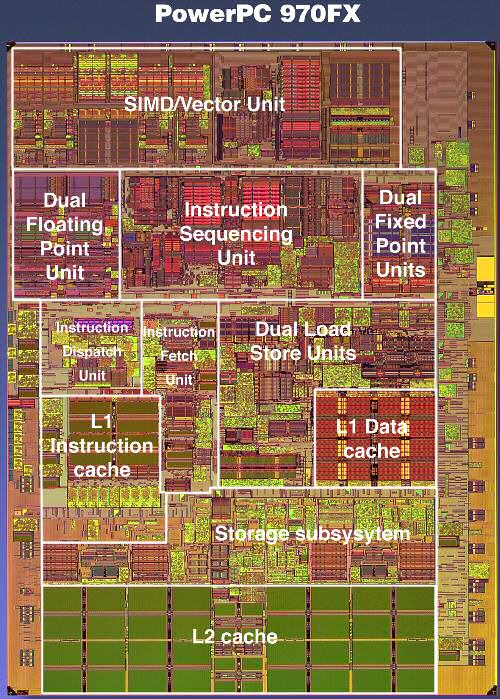 The design philosophy of the 970FX is very aggressive. It is not only a deeply pipelined processor, but it is also a very wide superscalar CPU that can theoretically sustain up to 5 instructions (4+ 1 branch) per clock cycle. The Opteron can sustain 3 at most; the Pentium 4's trace cache bandwidth "limits" the P4 to about 2 x86 instruction per clock cycle.

While 200 instructions in flight are impressive, there is a catch. If there was no limitation except die size, CPUs would probably keep thousands of instructions in flight. However, the scheduler has to be able to pick out independent instructions (instructions that do not rely on the outcome of a previous one) out of those buffers. And searching and analysing the buffers takes time, and time is very limited at clock speeds of 2.5 GHz and more. Although it is true that the bigger the buffers, the better, the number of instructions that can be tracked and analysed per clock cycle is very limited. The buffer in front of the execution units is about 100 instructions big, still respectable compared to the Athlon 64's reorder buffer of 72 instructions, divided into 24 groups of 3 instructions.

The same grouping also happens on the 970FX or G5. But the grouping is a little coarser here, with 5 instructions in one group. This grouping makes reordering and tracking a little easier than when the scheduler would have to deal with 100 separate instructions.

The grouping is, at the same time, one of the biggest disadvantages. Yes, the Itanium also works with groups, but there the compilers should help the CPU with getting the slots filled. In the 970FX, the group must be assembled with pretty strict limitations, such as at one branch per group. Many other restrictions apply, but that is outside the scope of this article. Suffice it to say that it happens quite a lot that a few of the operations in the group consist of NOOP, no-operation, or useless "do nothing" instructions. Or that a group cannot be issued because some of the resources that one member of the group needs is not available ( registers, execution slots). You could say that the whole grouping thing makes the Superscalar monster less flexible.

Branch prediction is done by two different methods each with a gigantic 16K entry history table. A third "selector" keeps another 16K history to see which of the two methods has done the best job so far. Branch prediction seems to be a prime concern for the IBM designers.

The caches are relatively small compared to the x86 competition. A 64 KB I-cache and 32 KB D-cache is relatively "normal", while the 512 KB L2-cache is a little small by today's standards. But, no complaints here. A real complaint can be lodged against the latency to the memory. Apple's own webpage talks about 135 ns access time to the RAM. Now, compare this to the 60 ns access time that the Opteron needs to access the RAM, and about 100-115 ns in the case of the Pentium 4 (with 875 chipset).

A quick test with LM bench 2.04 confirms this:


Memory latency is definitely a problem on the G5.

On the flipside of the coin is the excellent FSB bandwidth. The G5/Power PC 970FX 2.7 GHz has a 1.35 GHz FSB (Full Duplex), capable of sending 10.8 GB/s in each direction. Of course, the (half duplex) dual channel DDR400 bus can only use 6.4 GB/s at most. Still, all this bandwidth can be put to good use with up to 8 data prefetch streams.