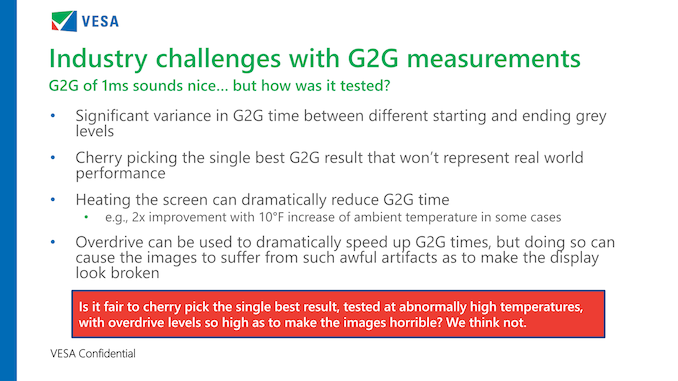 The resulting methodology is essentially G2G testing with all of the shenanigans stripped out to avoid cherry-picking results. Among other things, VESA’s test requires an ambient (room) temperature of 22.5 to 24.5 Celsius (72.5F-76F) and that a panel has reached its equilibrium temperature. This is because the response times of liquid crystals varies with the temperature, and thus a display can produce unnaturally good times if the panel is heated. The size of the heating effect is actually rather surprising: according to VESA, they’ve seen some displays halve in response times just by increasing the ambient temperature by 5.5C.

Meanwhile, to avoid favoring any one G2G transition, VESA’s G2G testing instead involves averaging the results of 20 transitions amongst 5 different grey levels (black, dark grey, mid grey, light grey, white). This does mean that the resulting value is going to be better than the worst-case transition, but it also means that the resulting value will be worse than the best-case transition; on average, it balances out. Overall, an AdaptiveSync display requires an average G2G response time of less than 5ms, which is more than fast enough for a full transition on a 144Hz display with time to spare. 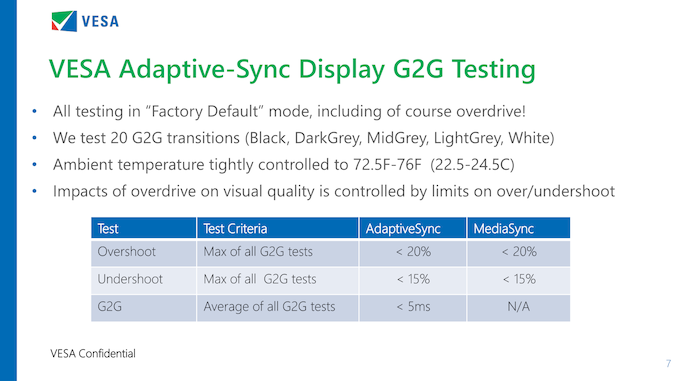 And, of course, the test looks at how well a display hits its target pixel value in order to ensure that the pixels aren’t being overdriven/underdriven by too much, which would result in visible ghosting. AdaptiveSync conformance requires that the highest G2G overshoot is under 20%, while the highest undershoot is even tighter at less than 15%. This is another case of the standard using perceptual boundaries, as a perfect result is all but impossible with overdrive, and a fast display is not possible without overdrive.

Notably, all of this testing is once again done with factory settings on a display. So although a display can offer multiple overdrive settings to satisfy a user’s preferences, the out-of-the-box mode needs to be the balanced mode, producing reasonably fast pixel response times without causing either ghosting (undershoot) or inverse ghosting (overshoot).

With all of that said, the pixel response time test does have a notable omission that monitor aficionados (and NVIDIA employees) will likely pick up on: variable overdrive testing. VESA’s testing does not explicitly test for overdrive at explicitly varying refresh rates, rather their testing is done in Adaptive-Sync mode which will have a display updating its pixels at what’s essentially their maximum refresh rate (e.g. 144Hz). It’s something that VESA has apparently put quite some thought into, as there’s actually a rather informative note about it in the AdaptiveSync Display FAQ:

In short, VESA believes that testing response times at multiple refresh rates is unnecessary, because in Adaptive-Sync mode displays should always be updating pixels at their maximum rate so that they’re ready for the next frame ASAP. This is a very interesting point, and one that will warrant a further look once there are monitors available that have passed the AdaptiveSync display conformance test. In the meantime it should be noted that this also doesn’t preclude displays using variable overdrive, as a display could implement it and still pass the conformance test.

Past that, variable overdrive has been a major component of NVIDIA’s G-Sync marketing for years now – and remains the differentiating factor between G-Sync (module) displays and G-Sync Compatible (VESA Adaptive-Sync) displays. So if VESA is right, then that could undermine the advantage (market or otherwise) of displays using NVIDIA’s G-Sync module.

And while VESA is focused on its own matters, it’s pretty much impossible to discuss AdaptiveSync without also discussing AMD and NVIDIA’s programs. While VESA is clearly looking to bring a bit of order (and transparency) to the process with their own standard, they’re not necessarily looking to usurp Freesync or G-Sync. Indeed, it’s fully within the allowances of the program that a monitor can be certified for both AdaptiveSync and a third-party variable refresh standard – or even both of them, making for a triple threat monitor.

But if we had to compare AdaptiveSync to the existing standards, at a high level AdaptiveSync looks fairly comparable to AMD’s FreeSync Premium and NVIDIA’s G-Sync Compatible standards.  This isn’t terribly precise comparison since VESA is much more forthcoming about its response time and flicker requirements than AMD or NVIDIA, but at a minimum these are the tiers that all require a wide enough refresh range for LFC, as well as all of the flicker testing all three groups do.

Meanwhile I’d be remiss not to mention Intel here, who is in the process of (at last) rolling out their own contemporary discrete GPUs. Intel only gained variable refresh rate support in 2019 with the release of Ice Lake (10th Gen Core) SoCs, and as a result they currently only have a minimal stake in variable refresh displays. None the less, it’s not to Intel’s benefit that the current certification programs for Adaptive-Sync displays are run by their competitors, so VESA taking on the task in an industry-neutral fashion helps them as well by giving them a certification logo and product database they can point customers to. And over the longer run, Intel stands to benefit even more from the MediaSync display standard, since that’s likely to become a big deal on Intel’s core consumer market of laptops.

Shifting gears, let’s talk about VESA’s other new Adaptive-Sync performance standard, MediaSync. As opposed to the high-end AdaptiveSync spec, MediaSync is far more low-end, focused on ensuring proper variable refresh rate operation for media playback and only media playback. This standard doesn’t have any gaming-centric tests, and while the testing methods are shared with AdaptiveSync, that’s about where the similarities end.

The MediaSync display standard, in short, is a much narrower specification focused around an equally narrow refresh rate range of 48-60Hz. This is the golden zone for media playback, as it’s wide enough to cover everything from movies (23.976fps) and PAL TV (25/50fps) to full speed (60fps) PC content. As well, the standard has the same no-perceptual-flicker requirements as AdaptiveSync, and MediaSync-certified displays will still need to meet the same 20%/15% overshoot/undershoot requirements to ensure there isn’t any ghosting even at these lower refresh rates. 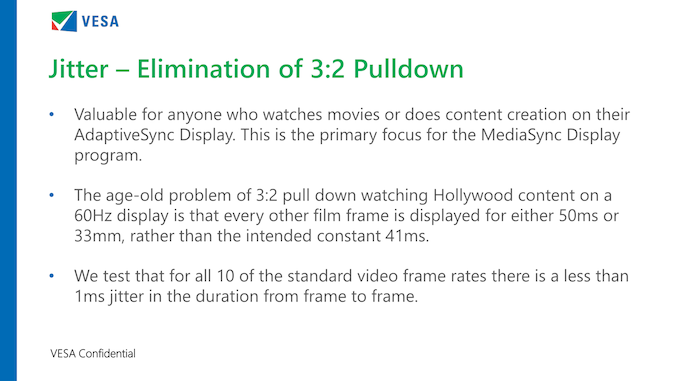 The big impetus behind MediaSync, beyond getting rid of display flicker, is putting a stake in jitter due to the mismatch between typical media framerates and PC display refresh rates. With most professional media content authored to 23.976, 3:2 pulldown jitter has been an issue for PCs for as long as they’ve had media playback capabilities. And since resolving it requires a relatively small range of refresh rates, variable refresh rate tech has always been well-primed to solve the matter.

In terms of technical specifications then, this means that MediaSync displays are limited to 1ms of jitter – frame-to-frame jitter must be no more than +/- 0.5ms. The spec, in turn, tests 10 different frame rates ranging from 23.976fps to 60fps, with testers employing frame doubling as necessary to bring up the lowest framerates to the refresh rate range of the display.

Compared to AdaptiveSync’s high standards, MediaSync’s requirements are something that should be attainable by a lot of monitors. So I wouldn’t be too surprised to see it show up on mid-range monitors, but even more than that, I expect this standard to be popular in the laptop market given how much media consumption is done on laptops these days.

Unlike DisplayHDR testing, OEMs cannot self-certify for AdaptiveSync/MediaSync compliance. Instead, all products must be sent to one of VESA’s approved Authorized Test Centers (ATCs), which the group already uses for things such as as certifying various DisplayPort devices. According to VESA, they are going this route because AdaptiveSync/MediaSync certification requires numerous specialized tools and significant know-how, which OEMs are unlikely to have access to. At the same time, it doesn’t hurt that this is another way which the new standards prevent shenanigans from OEMs by requiring a third-party prove that their products can meet the requirements.

That said, this does mean that certification will not come free. While OEMs do not need to pay VESA for the certification, they do need to pay the ATC for the testing. So the barrier to entry for a technically compliant display to get certified is very low, but it isn’t quite nil. 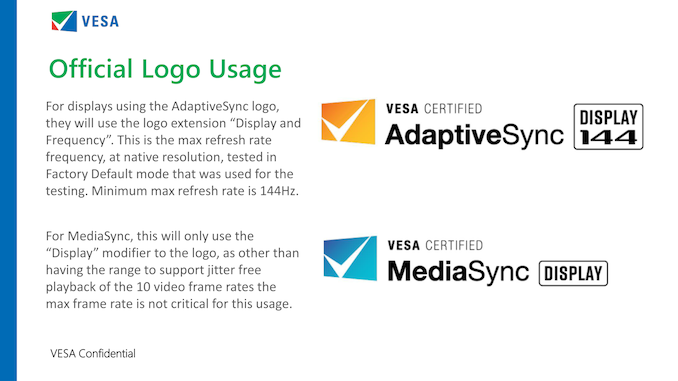 Once a display/product is certified, VESA has a unique logo for each program. For devices that pass AdaptiveSync conformance testing, the AdaptiveSync Display logo not only includes mention of the standard, but the display’s maximum refresh rate at its native resolution. This is to help communicate not only the maximum refresh rate of most monitors, but for the purposes of compliance testing on monitors with overdrive functionality, the refresh rate that the compliance testing was run at. Meanwhile MediaSync Display’s logo is more straightforward, and doesn’t make mention of refresh rates.

According to VESA, the final version of the standard was sent off to VESA members a few weeks ago. As usual for the group, they aren’t saying when we’ll see certified devices on the market since that’s up to their individual members. But, seeing as how there are some existing displays that should meet these standards, manufacturers should be able to promote their certification in short order – with updates to printed packaging to follow. Update: And indeed, LG is first out of the gate, announcing that both their 27GP850 and 27GP950 monitors are AdaptiveSync Display certified.

Finally, while the group hopes that they’ve knocked things out of the park with the first version of the AdaptiveSync/MediaSync standards, they’re also being quick to indicate that these standards aren’t set in stone. Should testing methods improve or OEMs find new and novel ways to pass certification, VESA is prepared to make further updates to the test suite. This is something they’ve already done once with DisplayHDR (which is now up to version 1.1), so there is precedent and experience here.