The Sun fire T2000 is more than just a server with the out-of-the-ordinary UltraSPARC T1 CPU. 16 DIMM slots support up to 32Gbytes of DDR2-533 memory. Internally, there is room for 4 SAS 73GB, 2.5" disks. Don't confuse these server grade disks with your average notebook 2.5" disks. These are fast 10.000 RPM Serial Attached SCSI (SAS) hard disk drives. With SAS, you can also use SATA disks, but you will be probably limited to 7200 RPM disks.

The T2000 is a headless server. To get it up and running, you first access the serial management port with Hyperterminal or a similar tool. The necessary RJ-45 serial cable was included with our server.

This way, you get access to Sun's Advanced Lights Out Manager (ALOM), which is a system controller that runs the necessary console software to administer the server. Running independently of the main server using standby power, the ALOM card is ready for operation as soon as power is applied to the server. 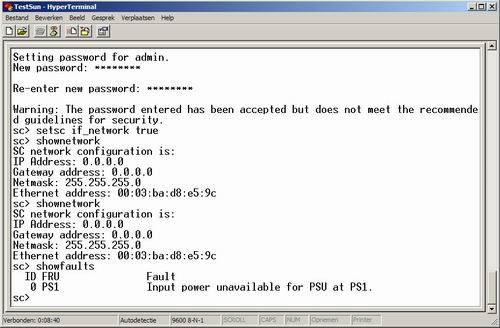 Once you have given the SC net management port an IP address, you can remotely manage and administer the server over a dedicated network, and you no longer need the serial connection.

The console software offers you plenty of different commands to administer the T2000 server. 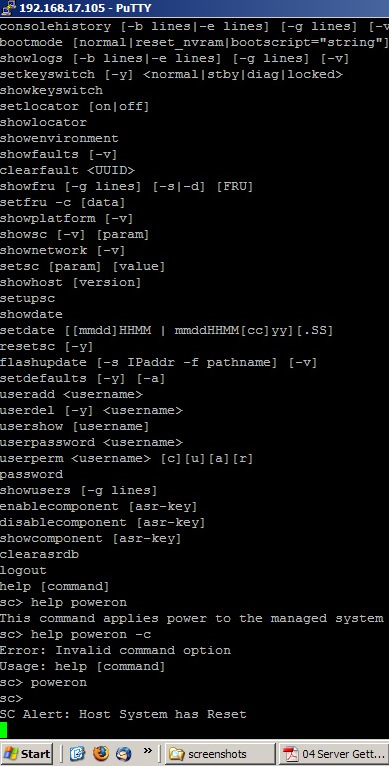 From within the administrator console, you can get access to your Solaris installation in the screen output of your T2000 server. You can always get back to the management console simply by typing "#.". 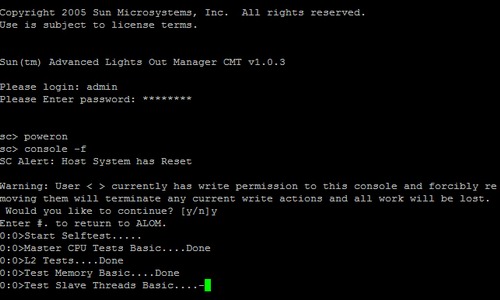 While using Putty or a similar SSH tool, combined with the fact that the T2000 is a headless design, it might give you the impression that the T2000 is Command Line Interface only; you can get access to the sleek GUI of Solaris. After browsing the file system through an ssh shell, we noticed that an Xorg server was installed. Since Solaris uses the Java Desktop Environment, which is based on Gnome, the Gnome Display Manager (gdm) was also installed. We reopened an ssh connection to the Sun, with X11 forwarding enabled. You can run 'gdmsetup' as root, where we could enable or disable XDMCP. After enabling it, we were able to connect to the Sun using Xnest, or by running our local XDMCP chooser. XNest showed Solaris in all its GUI glory... 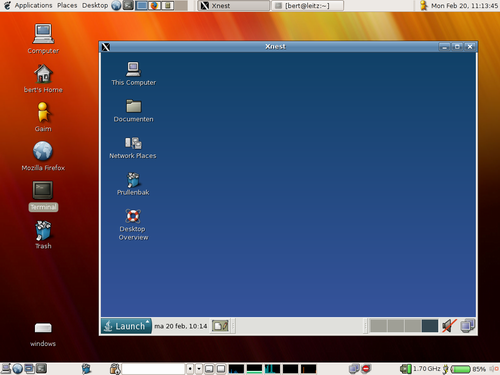 The GUI offers more than pretty pictures: Solaris Management Console (SMC) is a very intuitive tool that gives you a very detailed overview of the installed hardware configuration. 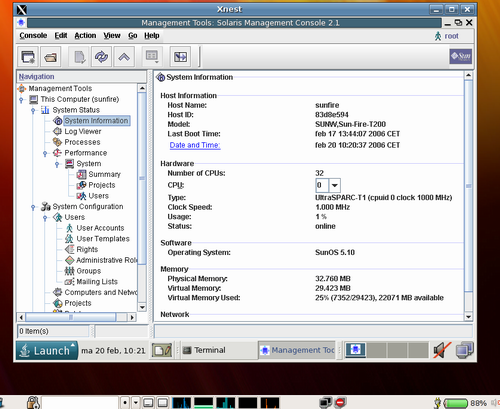 Some hardcore administrators may feel that real administrators only use Command Line Interfaces. However, it is our experience that the SMC (GUI version) is a very helpful and useful tool.

Sun also claims that the T1 CPU excels in RAS. See below for a comparison between the RAS capabilities of the current Xeon and UltraSparc T1 (source: Sun).

Sceptical as we are, we decided to give Intel a chance to criticize this table, but it seems that Sun was honest.

In fact, current Intel production Xeon Paxville processor - which find a place in similarly priced servers as the T2000 - do not support Parity checking on the L1 I-Cache - Tag. Intel also pointed out that the upcoming Woodcrest CPU will have improved RAS features.

So, it seems that right now, the Ultrasparc T1 outshines its x86 competitors.

The T2000 also features Chipkill(memory), which complements standard ECC. According to Sun, this provides twice the level of reliability of standard ECC. Chipkill detects failed DRAM, then DRAM Sparing reconfigures a DRAM channel to map out failed DIMM.

When it comes to RAS, especially the cheaper T2000 (with 1 GHz CPU), there is not an equal at their price point in the server market.