by Gary Key on May 7, 2007 4:00 AM EST
44 Comments | Add A Comment
44 Comments
We recently reviewed a 1TB drive from Hitachi and started reminiscing about the progress of hard drives. It has been a little over fifty years since IBM introduced the first hard drive in September of 1956. This hard drive had a 5 megabyte storage capability and consisted of 50 24-inch platters in an enclosure that required a fork lift to move it. The drive was only available at the time with the IBM 305 RAMAC system that was designed to process accounting information.

The advances in storage technology have been fast and furious since that eventful day in 1956. Over time hard disk capacity has grown increasingly larger while at the same time the drives have become smaller, less expensive, and generally a lot more reliable. However, the technology we have become dependent upon for our storage requirements has not really changed at all. We still have the basic design where a platter coated with a ferromagnetic material is used to store data and spins at a constant rate with an actuator arm hovering right above it which contains a read/write head for data retrieval or creation.

This mechanical process of storing and retrieving data has transformed over the years into what can only be considered a technical marvel but this whole design is still prone to disaster. After all, at any given time the read/write head could fail or physical shock could occur that would send it crashing onto the platters taking valuable data with it. This is only one of many scenarios that could cause data loss and the basic nature of the hard drive being a mechanical device still has inherent disadvantages that range from heat and power consumption to noise levels that are obtrusive at times. While we are at the point of another design technology breakthrough that will once again improve capacities and speed, the hard drive is still and will always remain a mechanical device. 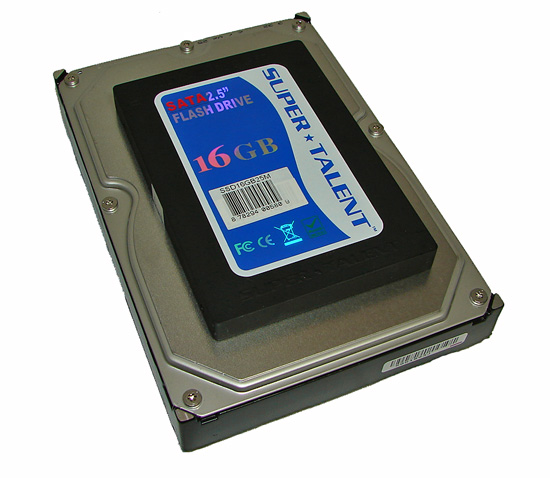 There is always a better mouse trap and today we will take a quick look at one alternative to the ubiquitous hard drive. This particular mouse trap goes by the name Solid State Drive. A solid state drive is based on flash memory along with a flash controller and management software. The first flash memory was invented in the Toshiba laboratories and became a commercial product four years later in 1988 when Intel introduced it into retail markets.

Solid state drives have been around since 1989 but have been limited to highly specialized markets such as medical, industrial, or military use due to the exorbitant costs involved since their introduction. In fact, at one time a 1MB drive cost around $3500 and performed significantly worse than its mechanical counterpart. However, the drives thrived in the military, aerospace, and to some degree the medical fields due to the advantages of a flash memory based drive. Since these drives do not contain any moving parts they consume significantly less power, generate minimal heat, are totally silent, and as flash memory and controllers have matured they now offer similar or better performance when compared to hard drives in certain usage scenarios.

When we look at the market today, we see an explosive growth in the use of flash memory in everything from cell phones to iPods. As the volume of flash memory has grown over the past few years, the price has gone down. As of late, the price of flash memory has been declining about 40% per year on average. Along with the price decreases we have seen an exponential increase in the capacity of flash memory while its packaging footprint has been greatly reduced. In fact, the etching process has now reached a 50 nm design compared to 90 nm just two years ago. Also, the widespread use of multi-level cell (MLC - 2 bits per cell) NAND instead of the faster but significantly more expensive single-level cell (SLC - 1 bit per cell) NAND has helped reduce costs.

While the size and memory capacities are now competitive (128GB in a 1.8" form factor), the pricing is still significantly higher when compared to hard drive designs. The average cost for a competitive SSD design in the consumer market is currently about $17 per GB of storage. This does not compare favorably to $0.25-$0.40 per GB for a typical hard drive today. However, we are at the point where a SSD product can be competitive with a hard disk in the consumer market based upon its advantages to cost ratio in applications like a rugged notebook or ultra-light design that requires extremely low power envelopes and shock resistant operation. It's worth remembering that not long ago the first GB hard drives could easily cost several hundred dollars.

We are also at the point where the flash controller and software can ensure the longevity of the drive but more importantly that data integrity is significantly better than a typical hard drive. Current SSD products being released can ensure at least 100,000 write/erase cycles per sector which equates to a 1,000,000 hour MTBF rating. This means an average user can expect to use the drive for about 10 years under normal usage conditions or around five years in a 100% power-on state with an active/idle duty cycle at 90%. These numbers are subject to change depending upon the data management software algorithms and actual user patterns.

Manufacturers have started providing consumer level solid state drives with 67MB/sec read speeds and 45MB/sec write speeds along with a random read rate of 7000 inputs/outputs per second (IOPS) for a 512-byte transfer - more than 100 times faster than a hard disk drive. While the IOPS rate is impressive and certainly contributes to real performance increases by removing certain I/O bottlenecks, we found the average random access rate of .12ms to be an even bigger factor in providing class leading performance in several cases.

Our technology preview today is based on the Super Talent SSD16GB25/25M Flash Drive that is being introduced into the commercial and industrial markets at this time. This drive has lower performance capabilities than the recently released consumer drives from SanDisk and Samsung but will provide us with an early peek at SSD performance in several areas. We will state upfront that our results and comparisons against two top performing hard drives should be tempered greatly as this drive is targeted to a different market sector.

We are currently testing consumer oriented SSD products and will provide a full review in the near future with a revised benchmark test suite designed around Windows Vista and suitable for providing direct comparisons to the new hybrid hard drives that combine NAND flash memory and a mechanical hard drive to offer the best of both worlds, or so we think. In the meantime, let's see the specifics on this drive.