Toshiba Portege R700—Inside and Out 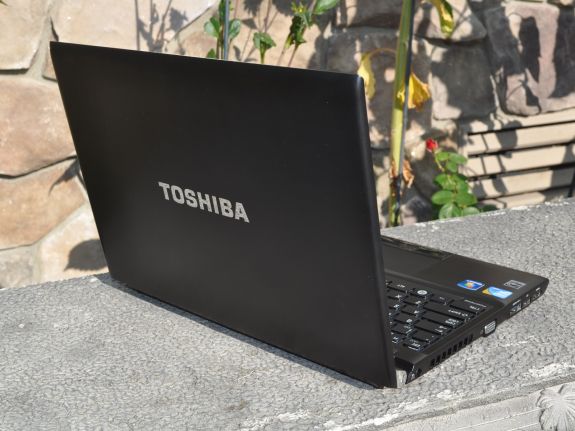 The R700 is definitely a good looking computer. Most of the external surfaces are rendered in black brushed magnesium, and it’s a subtle but high quality look. The large, chrome Toshiba lettering on the back is sadly not that subtle, but it does accentuate the overall aesthetic, unlike the somewhat chintzy chrome hinges. The side profile is wedge shaped and very thin throughout—the thickest point is just over an inch and slopes down from there. The surfaces are smooth and continuous, while the sides are almost entirely covered in ports. It’s not a very adventurous design, but attractive nonetheless. The overall simplicity of the aesthetic combined with the effect of the textured metal makes the entire notebook look and feel more upscale than the Toshiba name would lead you to believe.

Build quality is a more concerning item, in that it’s not very good. Even with the magnesium internal structure and the aluminum honeycomb, there’s a lot of flex present throughout the chassis. It’s especially egregious on the bottom panel, just under the optical drive, but even the palm rest on that side has a fair amount of flex. The left side of the system (which carries the HDD/SSD) feels much more solid and exhibits less flex, but that doesn’t make up for the ridiculous flex around the optical drive. The lid is fairly thin, and like most other superthin laptops, it’s not the most sturdy feeling lid and shows rippling under pressure along with being fairly flexible.

The chiclet keyboard is another issue—the feel is somewhat vague, and there is a little bit of flex at times. The flex isn’t particularly concerning and isn’t really noticeable unless you’re looking for it, but the mushy feel is pretty off-putting. To be fair, I’ve been dealing with some pretty stellar keyboards lately, with the business-class HP EliteBook 8440w and the ASUS U33Jc (in my opinion, the gold standard for consumer-level keyboards), but the Toshi keyboard is shockingly mediocre for a $1600 notebook. It looks and feels like a slightly larger version of the NB205 keyboard, which I’m not a huge fan of to start with. 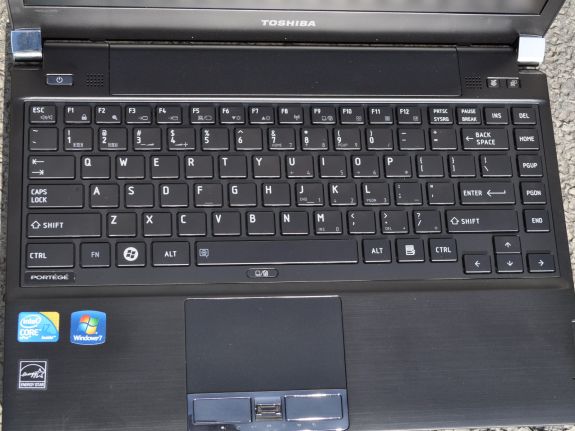 The touchpad is nothing special, though the dark chrome buttons are certainly an eyesore. I’m not sure why manufacturers continue to think that putting chrome in the most touched places on a notebook is a good idea—fingerprints, hello? It’s not just Toshiba; HP was terrible (chrome touchpads and buttons?) and ASUS does the chrome mouse buttons from time to time, mostly with their Eee PC netbooks. It’s simply a bad idea. Sorry guys. There’s a fingerprint reader located between the mouse buttons, which sometimes resulted in accidental swipes and such. I prefer having the fingerprint reader off to the side like Lenovo and HP do it, but I’m guessing Toshiba liked the aesthetic of having the scanner integrated into the touchpad assembly.

The R700 has a fairly good complement of ports, with two dedicated USBs and a USB/eSATA combo port, a VGA port, HDMI, Ethernet, an SD card reader, and an ExpressCard slot located under the optical drive. Nothing spectacular or groundbreaking, but a healthy assortment for sure. The speakers are pretty poor, but that’s about par for the course as far as ultraportables go. The webcam and mic work fairly well, enough for Skype conversations. The mic is located on the palmrest, so it can be covered by a hand if you’re not paying attention.