If you have been keeping up to date with any of the AnandTech motherboard reviews lately, there has been one topic that has been hot on my lips, and it is called ‘MultiCore Enhancement’.  As an exercise in explanation and opinion, we would like to know your thoughts on this, and how it would affect you as a user.

To start, let me describe what we are talking about.  On the latest line of Intel CPUs, we have multiple cores all willing to provide computational throughput.  The CPU itself has a listed stock speed, and a thermal window to ensure stable operation.  At the stock speed, the CPU does not hit the thermal window, so Intel assign higher speeds depending on how much computational power is needed, and this is adjusted to fit inside the power requirements.  Thus when a user requires only one CPU core, the CPU can be allocated the maximum turbo speed – when more cores are requested, the speed of the CPU drops until all cores are in use.  This is what Intel designates the ‘Turbo Boost’ for the CPU.

In the case of the latest Ivy Bridge CPU, the i7-3770K, this CPU has a nominal speed of 3.5 GHz.  However, the turbo boost is set such that in single threaded mode, the CPU can run at 3.9 GHz by adjusting the multiplier to 39x.  As more cores are loaded, the CPU reduces the multiplier down, until all four cores are in use and the processor is running at 3.7 GHz, still 200 MHz above the rated speed on the box.  This also applies to other processors:

However this technology is not defined by the processor itself.  The act of telling the processor to run at a certain speed is set by the motherboard, not the processor.  So as part of the deal with Intel, motherboard manufacturers’ code in the BIOS the algorithm to make the CPU switch speeds as required.  This algorithm can be aggressive, such that turbo boosts are held for a short time when CPU loading goes from low to high, or instant when CPU power is needed or not needed.  This algorithm and switching speed can determine how well a motherboard performs in CPU benchmarks.

This is all well and good when every manufacturer adheres to this specification.  But a new ‘feature’ has made its way onto our motherboards.  Since X79, ASUS has been implementing a feature they call ‘MultiCore Enhancement’ whenever XMP has been set.  Gigabyte has implemented this since their Z77 suite but as of yet leave it un-named, and ASRock are going to start using ‘MultiCore Acceleration’ with their Z77 OC Formula.  EVGA also has something in the pipeline for their Z77 boards.  This feature, put simply, gives the CPU some extra speed.

With these motherboards, usually when XMP is enabled, the CPU is told to use the top turbo boost setting under all loads.  That means a CPU like the i7-3770K has only two speeds – 3.9 GHz while under CPU load, and 1.2 GHz at idle.  For motherboards that implement this feature, they get a significant boost in their CPU benchmark scores.  As a result, the user who runs their processor at stock also gets up to 300 MHz more speed during multithreaded loading.

Technically, this is an overclock.  Typically we are told that overclocking a system is liable to void the warranty on both the processor and the motherboard.  With the case of the processor, typically what Intel put on the shelves is a safe speed – they are not pushing any competition to the limits, so these processors have breathing room and this ‘overclock’ should not harm longevity.  Nevertheless, Intel is usually very willing to replace processors (if I extrapolate the stories of returns I have heard).  With motherboards, they are designed to hold the top turbo bin at single core loads, so full threaded load should not be much of an issue.  Given that it is the motherboard manufacturers themselves that apply this, it would be reasonable that RMAs would be honored.

There has been a precedent with this in the past – when Turbo Boost was not part of the processor paradigm, motherboard manufacturers used to play around with the CPU FSB speed before it was passed through the multiplier.  So instead of 100.0 MHz on the FSB, we used to get 100.3 MHz, 100.8 MHz, 101.3 MHz, and even a case of 102.1 MHz I believe.  So essentially, a free 2.1% overclock if you ran the processor at stock speeds.

Given all this, I recently tested one motherboard that pushed the boundaries beyond the ‘normal’ MultiCore Enhancement.  The Gigabyte G1.Sniper 3, by default, gave the i7-3770K a 4.0 GHz turbo mode at any speed.  As a result, it took top spot in all our benchmark settings.  The G1.Sniper 3 is a high end product, so producing the jump was not much extra work for the product itself.  However, it does open up a variety of questions.

- How many users run processors (K or non-K) at stock?
- How many will notice the difference in speed?
- Will they worry that technically it is an overclock?
- Will a manufacturer go that one step further, to 4.1 GHz, or 4.2 GHz?  What is a safe limit?

Here are the results from one of my benchmark tests.  Here is 3DPM, a memory agnostic benchmark, using the multi-threaded version: 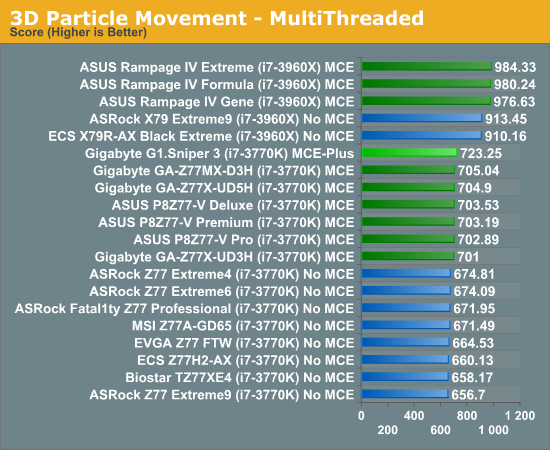 Here we see that the boards with MCE all come top.  More cores means more points, and more MHz is king.  Boards without MCE have to have an aggressive turbo switching algorithm to stay close, or fall behind up to 10% away from those without MCE.

I would like to cite some scenarios involving individuals and their computers in order to draw some conclusions.

Deductive reasoning tells us that Persons 1 + 3 will benefit slightly from MultiCore Enhancement, however the gamer moreso than the worker.  Person 2 overclocks, and thus MCE does not affect them.  Person 4 is more like a victim of MCE – without going into the BIOS they are unnecessarily using more energy than needs be.

Several companies have approached me and ask why I test motherboards with MCE enabled.  My response is that I test the ‘out of the box’ performance for the majority of users, such as Person 1, or system builders making machines for Person 3.  If I pre-overclocked the normal ATX boards, while that would help Person 2 in their decision, I would have to do it as well for Person 4 in order to keep the comparisons between ATX and mITX relevant.  Keeping everything at default on the latest BIOS is a steady baseline between these scenarios – if a motherboard manufacturer wants to be aggressive and enable MCE (or MCE-plus), then that is up to them.  But as a result of MCE, some companies who have not enabled it are being left behind in terms of stock CPU performance.

The point of this pipeline post is to ask our readers what they think of MultiCore Enhancement.  Do you like it?  Does it matter to you?  Should it become the standard, or should companies offer different SKUs with and without MCE?  If two motherboards from different companies are all equal on price and features but differ by MCE, would you go for MCE?  Would you worry about longevity?  Please let us know in the comments.