02:28PM - And we're done! We'll be working on a deeper Haswell architecture piece over the next couple of days.

02:27PM - Intel isn't disclosing exact details on what aspects of voltage regulation have been integrated

02:27PM - But lots of the fine grained control on client Haswell platforms we'll see in servers

02:27PM - Not going into detail on the Haswell server product today

02:27PM - Haswell will include far more power gates on the platform level

02:26PM - Haswell integrates some but not all of the voltage regulation so Intel can do more fine grained control of the pieces inside the die

02:25PM - Sidenote: it's always hilarious to see how many Intel OEMs and competitors end up in these tech insight sessions 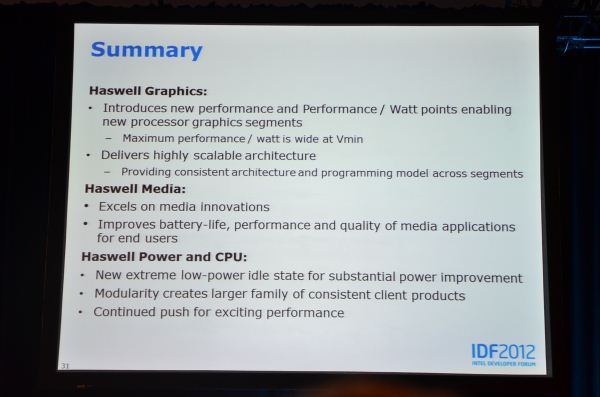 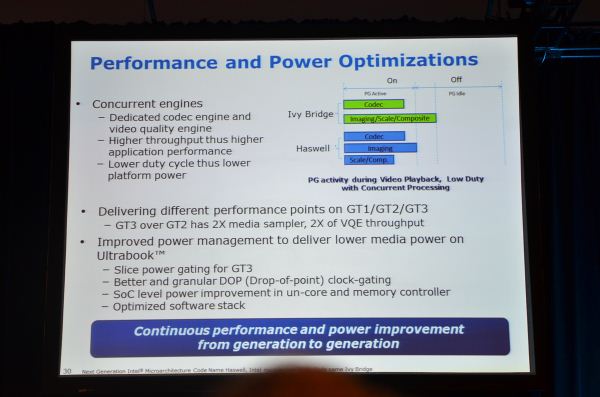 02:21PM - In the past only had two concurrent engines: codec and imaging/scale/composite, now you can do more in parallel as long as there's enough bandwidth to sustain 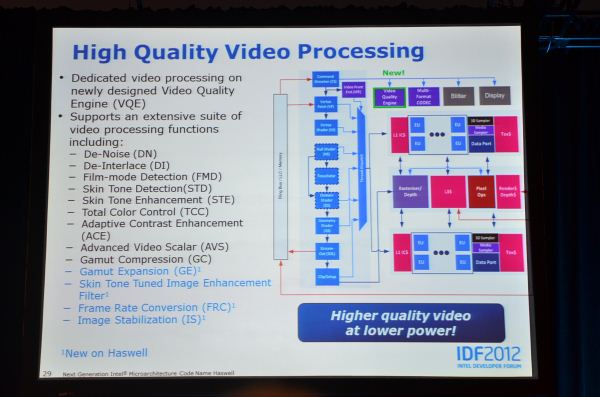 02:18PM - Moved some video processing stuff off the EU array into a dedicated video quality engine 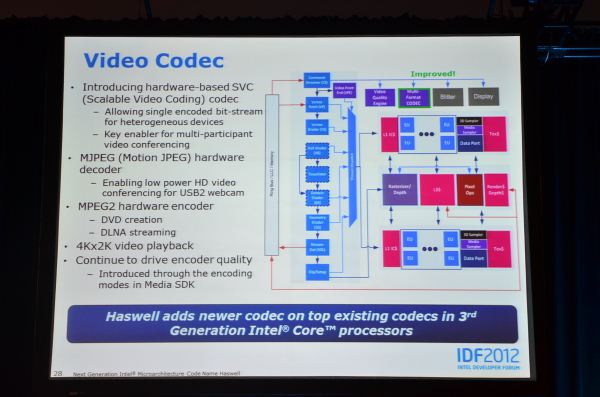 02:14PM - Introducing hardware based SVC codec, can encode once and playback at multiple resolutions 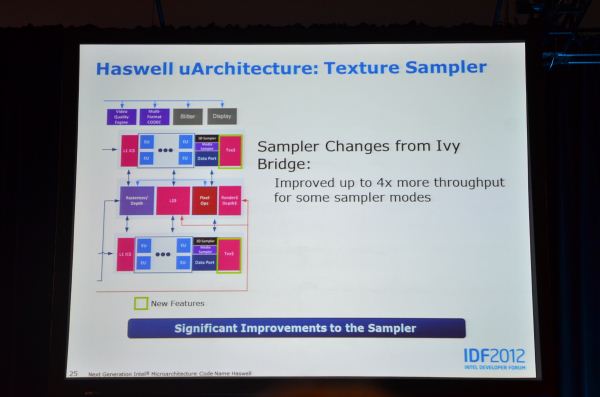 02:11PM - Half a terabyte of internal bandwidth between compute and cache 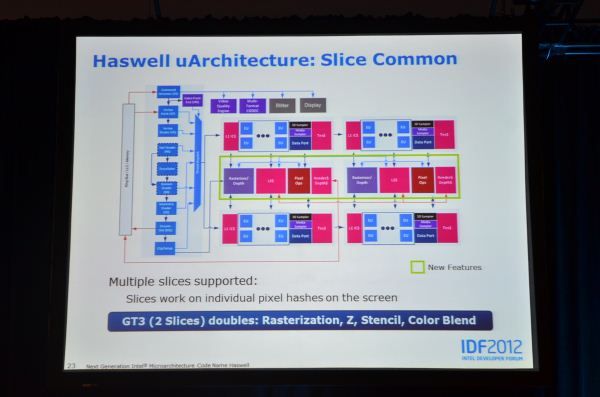 02:10PM - Doubled the performance of most of the fixed function units for normal rendering on the GT3 part

02:09PM - Added a resource streamer at the front end, offloads some driver work which helps the CPU go to sleep so the GPU can do work on behalf of the driver instead of the CPU

02:08PM - CPUs can run at low voltage/low frequency, but the GPU can now pull the ring up to feed the engines without pulling up the CPU voltage/frequency

02:08PM - Haswell totally decouples the ring from the CPU 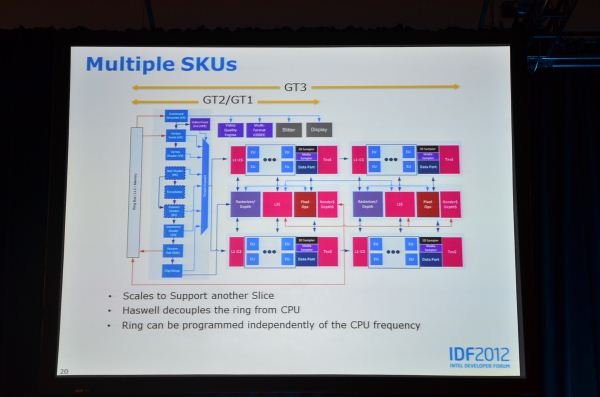 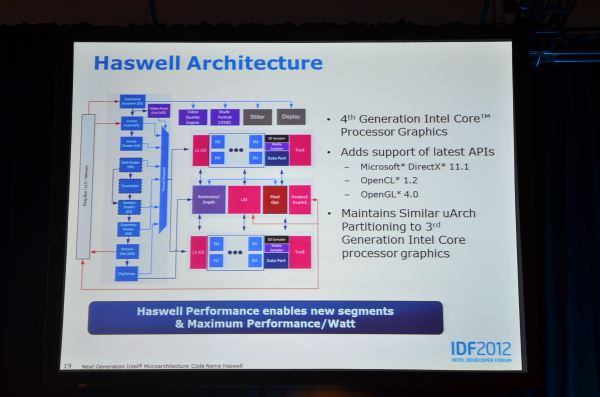 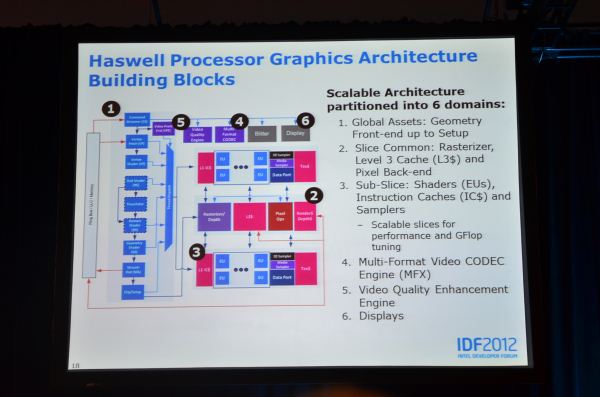 02:07PM - Haswell GPU architecture is similar to IVB, Broadwell will likely be different

02:04PM - Now on to graphics innovations

02:04PM - One hour session tomorrow on TSX, hmm I hope it doesn't conflict with another major event...

02:03PM - Hardware can then attempt to extract parallelism with concurrent memory accesses

02:03PM - TSX allows the developer to give hints about concurrent accesses

02:03PM - But what if you have two threads accessing the same table but are updating completely independent things?

02:02PM - Normally when you have many cores working on the same data structure, you typically have one thread handle updates and lock the structure for everything else 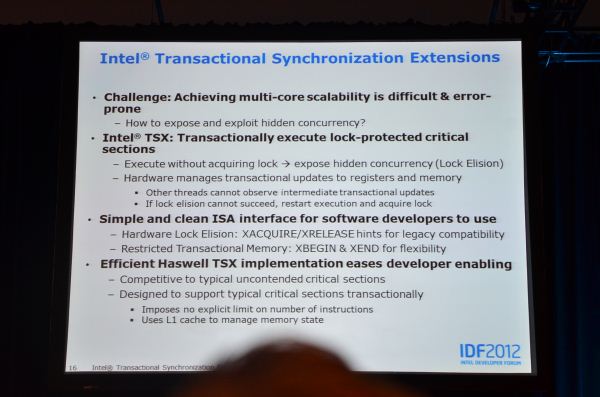 02:01PM - Also doubled bandwidth at L2 cache, went from 1 read of the L2 every other clock cycle to a read every clock cycle 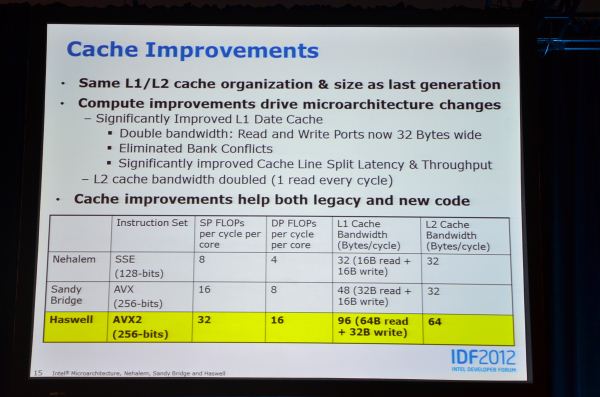 01:58PM - Whenever we double the FLOPS like we did here, you need to double the capability to feed those units

01:57PM - A bunch of new vector and scalar instructions 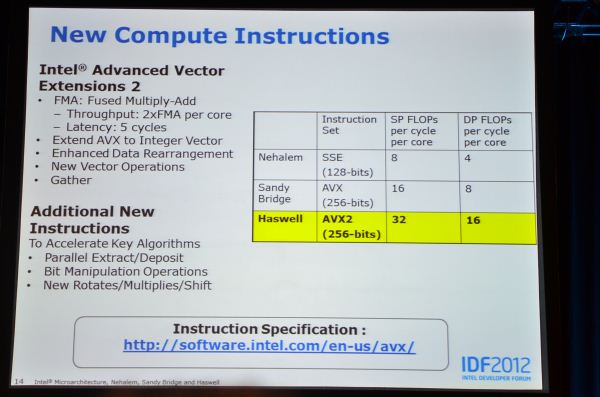 01:53PM - We now have the ability to do two FP multiply-adds every cycle

01:53PM - Added another integer ALU, can now execute 2 branches per cycle, another store address port, can do 2 loads and a store every cycle 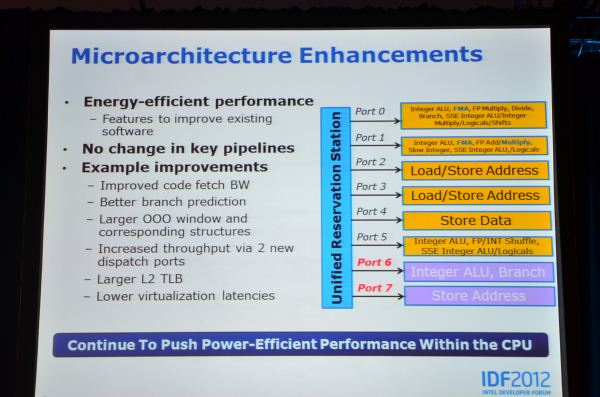 01:52PM - Now it's time to talk about Haswell CPU microarchitecture

01:51PM - A lot of focus on improving overall platform power, not just the CPU/SoC

01:50PM - Panel self refresh is supported (if the image doesn't change, display just keeps displaying the same image, rest of the platform goes to sleep)

01:49PM - To meet the power goals Intel worked with OEMs to give power budgets for main components in the rest of the system

01:48PM - This is how you achieve the 20x platform idle power improvement

01:48PM - Even deeper C-states, can transition between C-states up to 25% faster

01:48PM - Power delivery system is much more fine grained in delivering power to only the pieces that need to be on

01:47PM - That link is optimized for the lowest energy per transfer possible

01:47PM - The link between the CPU and the chipset has been optimized for power, depending on which Haswell part you get 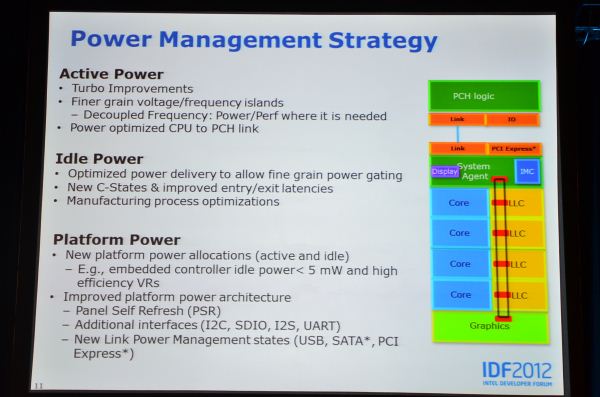 01:45PM - It sounds like Haswell remains in S0 but can quickly transition to active idle, allowing you to get the best of both worlds

01:45PM - The hardware does this automatically, continuous, fine grained

01:45PM - Transition times are a lot shorter between high and low power states

01:45PM - This is where we get improvements in platform idle, and battery life 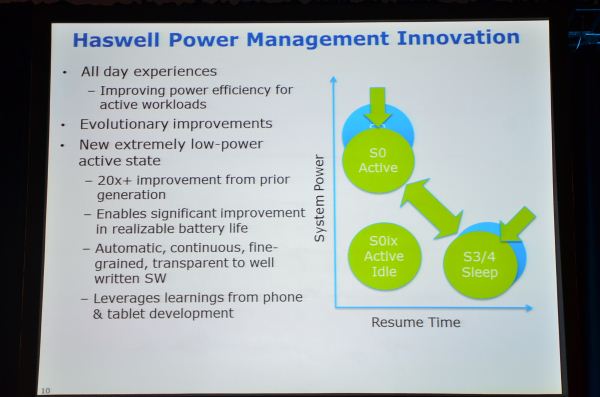 01:44PM - OS thinks the SoC is active, but you get idle power characteristics and can transition between active and idle very quickly

01:43PM - In the same level of system responsiveness, the system power has come down - transition times to lower power states are quicker now as well

01:43PM - In Haswell, we have worked in making power efficiency/power for active be much better

01:42PM - And you transition between the two, active state was in watts, idle states go into hundreds of milliwatts

01:41PM - When you get into those power levels (8W), you can get into very attractive tablets, and also think about going fanless

01:41PM - We can also have the same graphics performance at half the power

01:41PM - Haswell achieves, at the same power level, we have twice the graphics performance [over IVB]

01:39PM - Design points in the past still exist, but adding lower power design points that we never had before 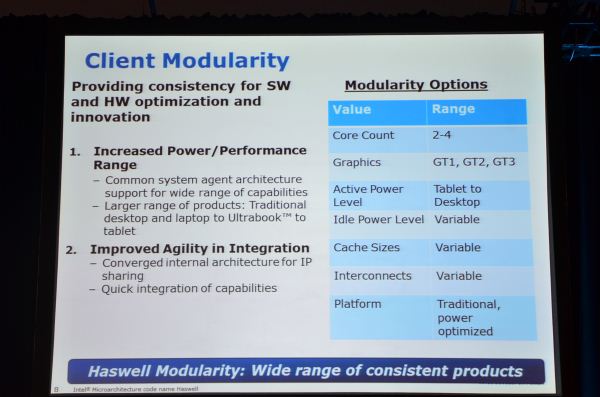 01:38PM - The same power enhancements you need to get into tablets actually benefit many core server designs as well 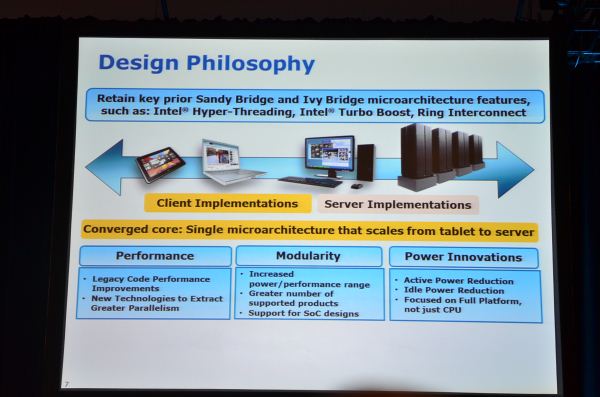 01:35PM - Haswell will go from tablets to servers and everything in between

01:34PM - Span of Haswell family is larger than previous architectures 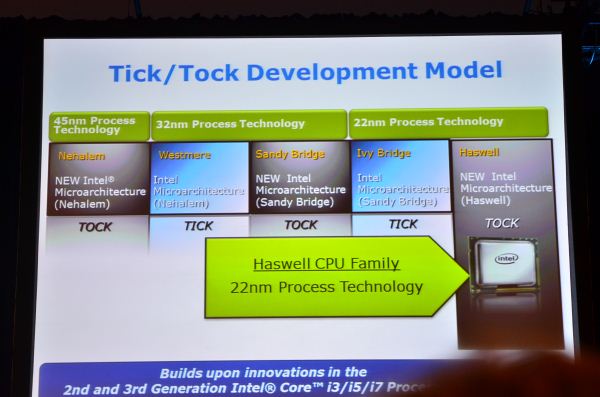 01:34PM - Haswell is a tock, second 22nm CPU but significant change at the platform and architectural level

01:32PM - We're going to get a high level architecture disclosure as well as some indication of what we'll see in client deployments of Haswell

01:31PM - Ronak Singhal, one of the Haswell architects, is talking now

01:30PM - Seats are filling up, we're waiting for the session to begin 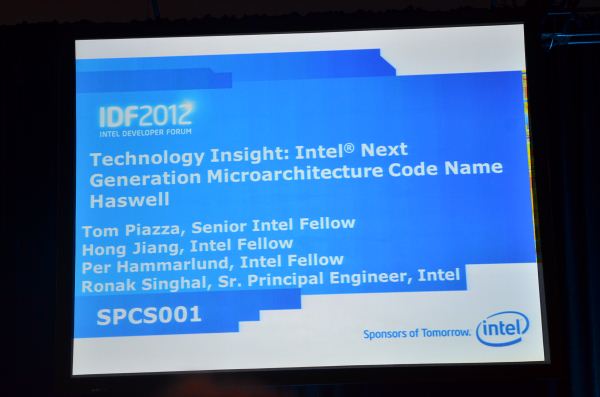