Earlier this week Google announced two new flagship Nexus devices: the Nexus 4 smartphone and the Nexus 10 tablet. We received review samples of both earlier this week, and while we're hard at work at full reviews of the devices we couldn't help but share all of the test data we've been able to amass at this point.

For those who aren't familiar with it, the Nexus 4 features Qualcomm's Snapdragon S4 Pro SoC - a quad-core 28nm Krait CPU with Qualcomm's next-generation Adreno 320 GPU. The combination proved quite formidable in the MDP/T we tested, as well as LG's recently announced Optimus G. The SoC drives a 4.7-inch 1280 x 768 IPS display and is paired with 2GB of LPDDR2 memory. The Nexus 4 ships unlocked with 8GB of NAND for $299 without a contract ($349 for the 16GB version). Pair that with DC-HSPA+ support and you get an absolute killer smartphone for use on T-Mobile: no contracts, very low monthly fees, and compelling cellular performance:

Brian will talk more about the combination in his full review, but rest assured that the lack of LTE is workable depending on T-Mobile coverage where you live/travel to.

The Nexus 10 also boasts a brand new SoC: Samsung's Exynos 5 Dual. The Exynos 5 Dual features two ARM Cortex A15 cores running at 1.7GHz as well as ARM's own Mali-T604 GPU. This happens to be the exact same platform used in the new Chromebook, just running Android. The Nexus 10 features a 10.1-inch 2560 x 1600 display, giving it the same resolution as the 13-inch MacBook Pro with Retina Display - but in an even smaller form factor. Google is also aggressive on Nexus 10 pricing: the 16GB WiFi-only tablet sells for $399, with the 32GB version going for $499.

Both Nexus devices run Android 4.2 and are guaranteed to be the first devices to be updated to upcoming Android revisions for the foreseeable future (it's the power of Nexus).

We haven't had a ton of time to test the devices and put this together so you're going to see combined performance charts throughout the rest of this article.

The big story when it comes to CPU performance is a look at how the Cortex A15s perform under Android. Unfortunately we're still left with mostly browser based benchmarks to measure CPU performance, which actually highlights a major issue in our testing: Android V8 optimization doesn't seem to be anywhere near as good as it is under Chrome OS or Windows. As a result, all of the Nexus 10 performance scores end up slower than the new Chromebook - despite using the same SoC and running Chrome on both platforms. It's also possible that the Exynos 5 Dual in the Chromebook is allowed to burn a bit more power, translating to better performance, but either way the solution here in the Nexus 10 doesn't look as good across the board. 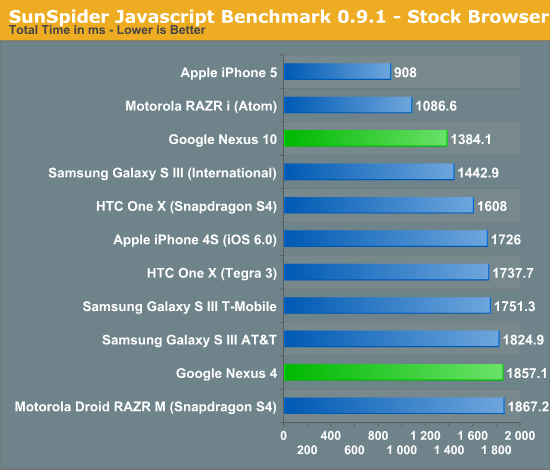 SunSpider performance is good, but not significantly better than Qualcomm's Krait based Snapdragon S4. Both the iPhone 5 and RAZR i are able to outperform the Nexus 10. The S4 Pro based Nexus 4 tends to be in line with other S4 based devices - SunSpider doesn't really give much credit to the extra 2 cores. 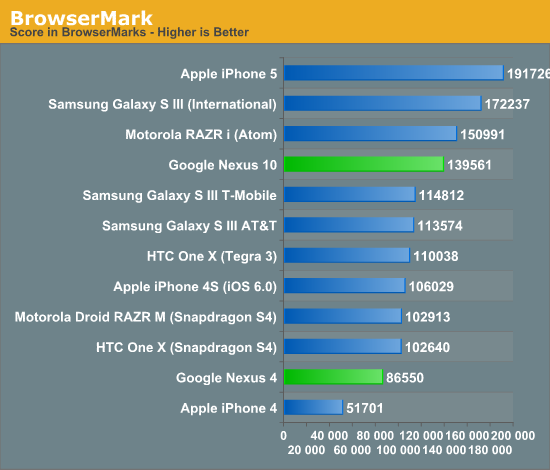 BrowserMark puts the Nexus 10 behind many platforms that should be faster, I'm even wondering here if there's some hard partitioning of memory bandwidth between the CPU and GPU to drive the 2560 x 1600 display that's simply choking the CPU here.

The Nexus 4 does ok, but again there seem to be some V8 optimization issues at work here under Android 4.2. At 1.5GHz it should deliver at least the performance of the dual-core Snapdragon S4 solutions. 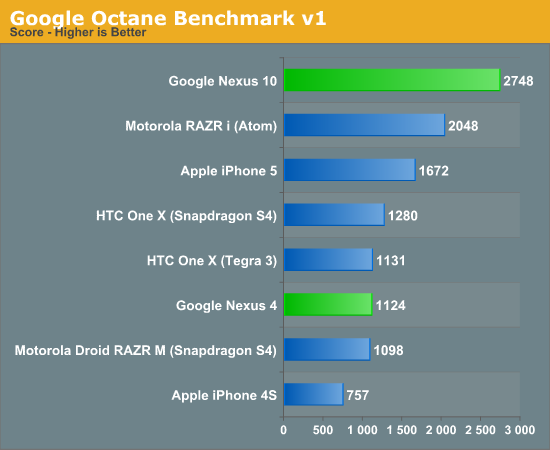 Octane is the first test where the Cortex A15s are really able to flex their muscle - the Exynos 5 Dual based Nexus 10 manages to outperform the RAZR i by 34%, and compared to the A6/Swift based iPhone 5 the advantage grows to 64%.

The Nexus 4 performs about in line with other Snapdragon S4 based devices, although once again the extra 2 cores don't seem to be doing much for it here at all. 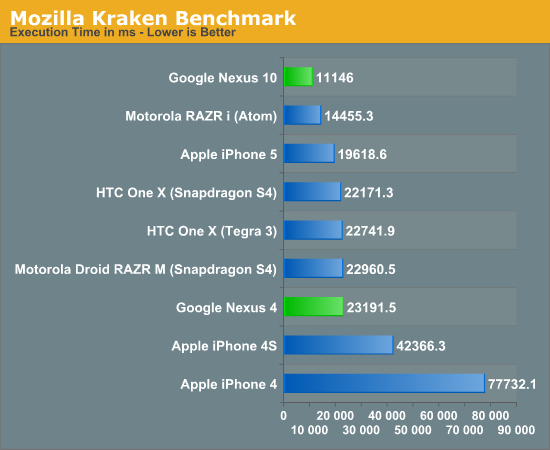 Kraken also paints the Cortex A15 based Nexus 10 in a good light: there's a 30% advantage over the RAZR i and a 76% advantage over the iPhone 5. These numbers will shrink a bit compared to other tablets, but not by much. The Nexus 4, once again, ends up performing similarly to dual-core Snapdragon S4 based devices.

Overall, the Nexus 10 results show us some real promise for what we can expect from ARM Cortex A15 based SoCs. The potential upside to this new architecture is huge.