Introducing the ErgoDox and Massdrop

Since the start of the year, I’ve been on something of a quest – no, not the Quest for the Holy Grail, but rather a quest for the best ergonomic keyboard. It started out with the TECK, moved on to the Kinesis Advantage, and now I’m working on wrapping up my third ergonomic keyboard review, this time the open source designed ErgoDox, with components and assembly provided by Massdrop. How does this keyboard stack up to the competition? As with all things subjective, that’s going to be more difficult to answer than something like “which CPU or GPU is faster?” What one person likes another may despise, and as with the previous two keyboards I want to start with a word of caution: adapting to any one of these ergonomic keyboards means getting over the learning curve. It can be done, and it will take anywhere from half a day to perhaps a couple weeks for you to get fully adjusted. So if you’re willing to shell out $200+ for an ergonomic keyboard with mechanical switches, be prepared to spend some quality time getting to know your new keyboard before trying to decide whether or not it works for you.

With that out of the way, let’s talk a bit about the ErgoDox and Massdrop. I’ll start with Massdrop, as they’re the ones who provided the review sample. Massdrop is a startup based out of Palo Alto, CA and was founded in early 2012. As of now, they have successfully helped facilitate over 300 group buys. The idea behind the site is a bit like Kickstarter, only you’re ordering parts or products at a bulk discounted rate by teaming up with others interested in the same item. It should come as no surprise that buying larger quantities of any item usually gets you a better price, and Massdrop helps people do exactly that. They’ve been around about a year and a half now, and the range of products available is basically only limited by what you can get others to buy. The only catch is that, like Kickstarter, you have to reach a certain goal or else nothing gets ordered; unlike Kickstarter, you’re not really hoping that a company actually follows through and makes what you wanted, as you’re ordering physical goods that already exist. 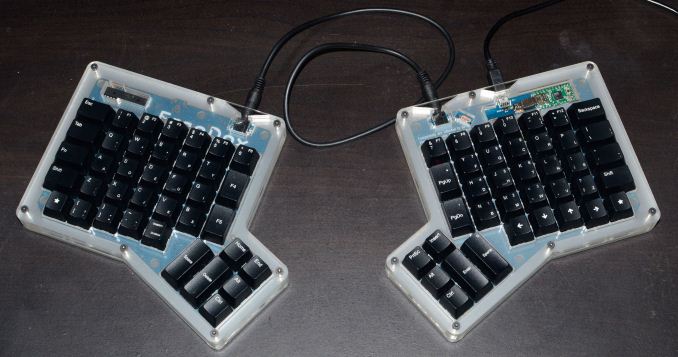 That takes care of the Massdrop side of things, but what exactly is the ErgoDox? This is where things get interesting. The ErgoDox is a mechanical keyboard that uses an open design – as in, open source for hardware – with the hardware and design released to the public under the GNU GPL  v3; you can read the finer points of detail on the ErgoDox License page. The ErgoDox builds off the Key64@ keyboard design, which was a keyboard that tried to reduce the total number of keys to just the ones you really need, resulting in a more compact layout. The ErgoDox has a few additional keys, bringing the total key count to 76 – at least on the model I received, though it appears versions with up to 80 keys exist. With the design complete, the trick then is finding the hardware necessary to actually build an ErgoDox keyboard. You could try to do it on your own, and certainly the potential for individual modding is there, but the basic PCB will largely dictate what else you can do. Massdrop provided the following history of how they came to be involved with the ErgoDox, which I’ll quote verbatim:

“We were approached in October of 2012 by several members of the mechanical keyboard community to help the group in facilitating a buy for the ErgoDox Mechanical Keyboard. After being involved in several buys already, these individuals loved their experience with Massdrop so much that they thought we’d be the perfect people for the job. What made the ErgoDox so special to us was that it was community validated. It was the mechanical keyboard community that came together, had a vision of the perfect keyboard, discussed, debated, and built it. However, to make the ErgoDox a reality for the entire community, they needed help, and that’s where Massdrop came in. Massdrop was able to source all of the individual parts the community needed at less than half the price they would go for if an individual tried to purchase them alone. With that we were elated to be able to help bring ErgoDox to the entire mechanical keyboard community and save them a substantial amount of money in the process. Since our first ErgoDox buy, we have sold over 800 ErgoDox Mechanical Keyboards and it doesn’t seem to be slowing down.”

With a bit of the history out of the way, let’s move on to the actual hardware. If you purchase an ErgoDox, you get all the parts and then need to put the keyboard together – something of a weekend project, assuming you’re handy with a soldering iron. As far as I’m concerned, the less work the better when it comes to something like a keyboard, so I’m more than happy to not have to do any soldering to get the ErgoDox up and running. Right now (through the end of the week), Massdrop is running another order of parts for the ErgoDox keyboard. Ordering everything on your own would likely put the total cost at over $400 (some estimates put it as high as $570!), never mind assembly and shipping charges; the base cost for this Massdrop ErgoDox order is $274, and that was achieved, and in fact at this point the minimum price of $199 has been unlocked (plus $37 for blank key caps). So if you want to get an ErgoDox, now would be great time to buy – otherwise you’ll be waiting at least six weeks for the next Massdrop order.

There’s still that question of assembly of course; what does someone without a lot of soldering experience do? Massdrop has reasonably detailed instructions for how to put the ErgoDox together, but I’m sure there are others who would rather have someone else do the work for them.  Massdrop now offers that, with $20 getting you a partially assembled keyboard (you have to solder the switches) and $50 getting the whole thing pre-assembled, just like my review sample. There’s also a bit of customization available: you can choose among four types of Cherry MX switches (Blue, Black, Clear, or Red), and you can get either a full-hand version of the case (with a palm rest) or a “Classic” casing that doesn’t have an integrated palm rest. For my review sample, I asked to try out the Clear switches with the Classic casing; that may not have been the right choice for me, as I’ll detail later, but the key there is choice: get what you will like, not what someone else likes.

One final item to note is that I'm basically stuck reviewing the design that was sent to me, with some potential remapping of keys to accommodate what I like. The ErgoDox is highly customizable, so other than having labeled key caps there's a lot of other nuances to my review sample that may or may not apply directly to one that you purchase and build. I'll try to make a note of some of these throughout the review, but try to remember: customization is a major part of the draw for this keyboard. And now let’s get on to the meat of the review with some objective and subjective analysis.