Given this is a mobile workstation by virtue of the FirePro M4100 GPU, that's arguably going to be the biggest reason to consider forking out the money for the ZBook 14, so let's just jump straight to the results of our workstation benchmarks. For testing, I ran SPECviewperf 11 and 12, but 12 is so new that it's a bit finicky and routinely had individual tests that would hang (or at least not return a score), so I'm sticking with the older version – plus we have a few other mobile workstations that we've tested with SPECviewperf 11 in the past. I also ran the SPECapc Lightwave 9.6 test. For reference, I ran the same tests on a couple of recent (and one upcoming) consumer grade laptops: the Dell XPS 15 (GT 750M), MSI GE60 (GTX 860M), and MSI GT70 (GTX 880M). Considering the potential difference in normal graphics performance – the GTX 880M in particular should be far more powerful than the M4100 – the performance results in professional applications were still surprising.

It's been a while since we've reviewed any mobile workstations – the last one was almost 18 months ago, when Dustin reviewed HP's EliteBook 8570w – so we don't have a lot of recent offerings in our charts. However, workstation hardware tends to stick around a lot longer and if nothing else it will be interesting to see where the new M4100 rates compared to the older M4000 from the 8570w. Also included in the charts are a few desktop workstations (results are in red) and the consumer laptops (results in black). 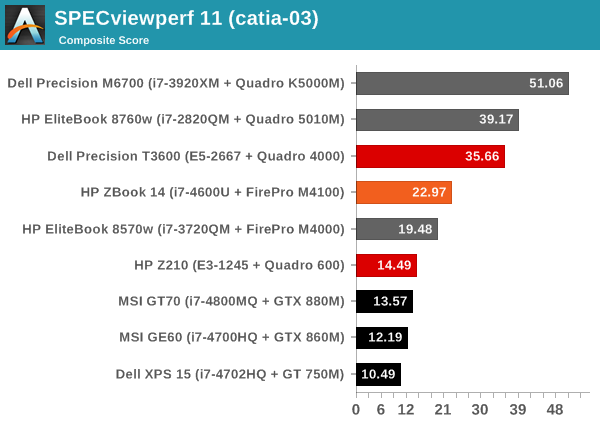 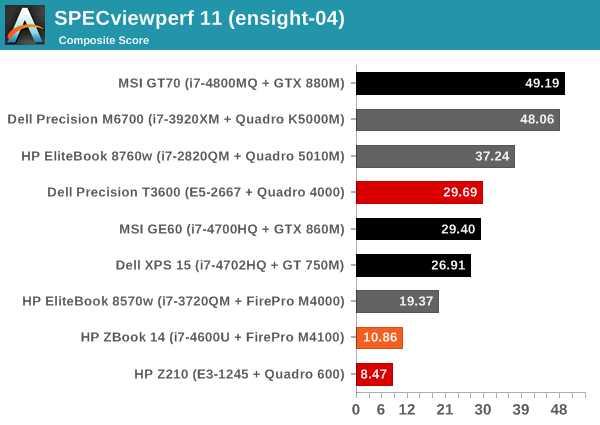 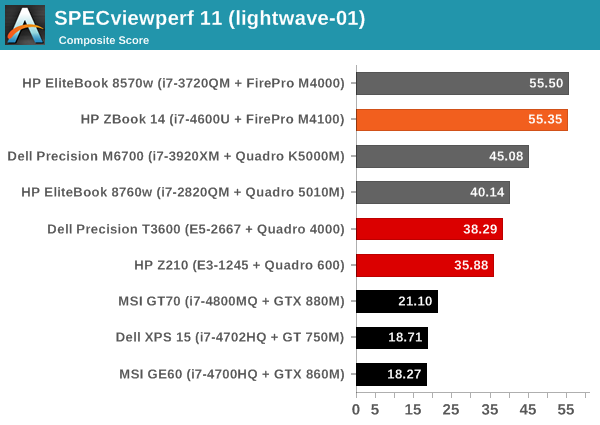 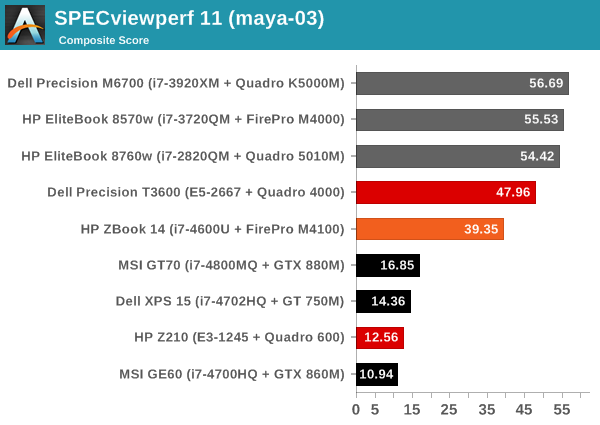 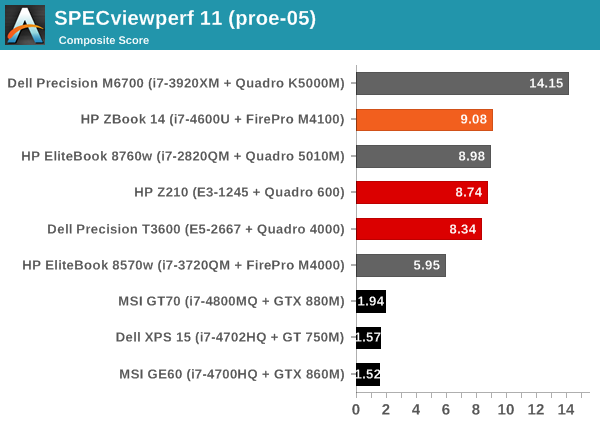 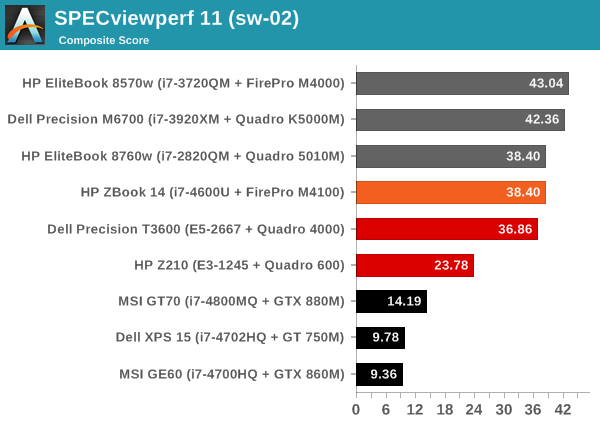 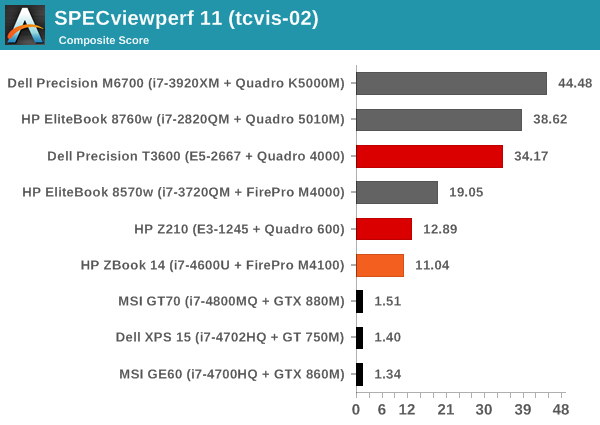 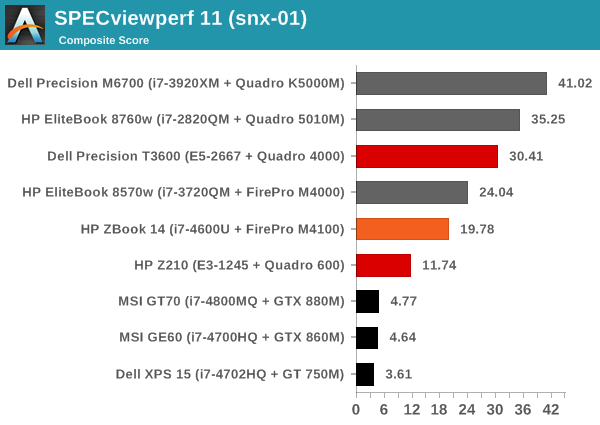 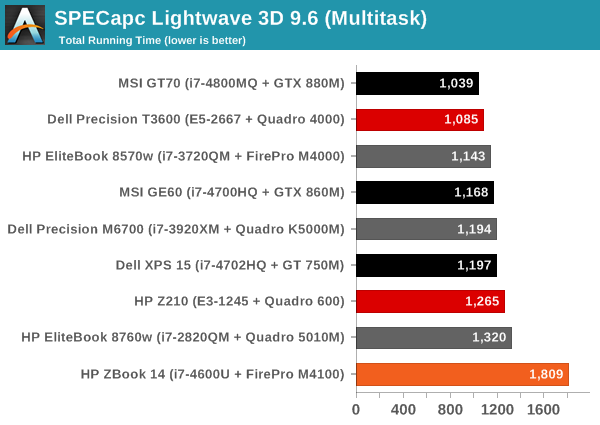 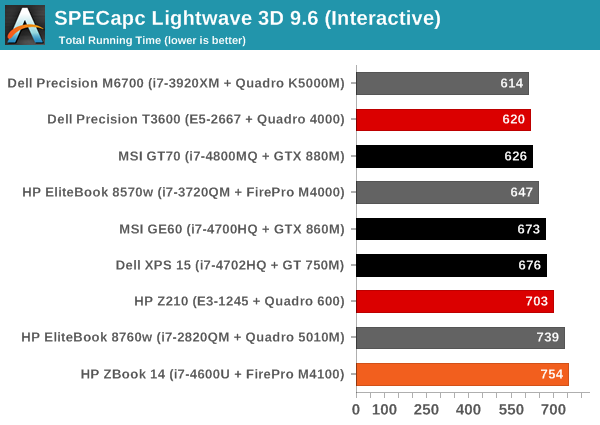 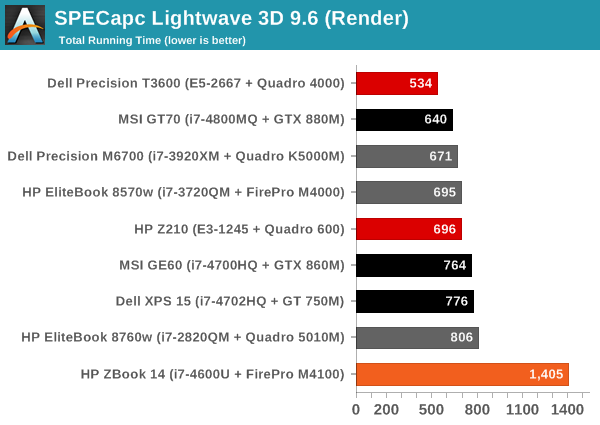 There are clearly applications where having a workstation class GPU can make a tremendous difference; conversely, in some cases the GPU doesn't matter much at all and the CPU takes precedence. Given the ZBook 14 has to get by with a dual-core ULV processor, it can hope to compete with quad-core processors in the latter class of benchmark, but for those tests that rely on OpenGL acceleration it can often make a noticeable difference. I don't generally use any of these "professional" applications, so scores in Pro/Engineer, SolidWorks, Siemens Teamcenter and NX, etc. don't really matter to me. If you know enough to care about these scores, however, you can see that there are cases where the ZBook 14 is able to come close to the performance of even desktop workstations; not surprisingly, those are the same benchmarks where consumer level GPUs simply fail to impress, regardless of how fast they might be for other benchmarks (which we'll get to in a moment).