The typical problem with high-speed passively-cooled DAS units is performance consistency. This may be influenced by thermal throttling and firmware caps on access rates to avoid overheating or other similar scenarios. This aspect is an important one, as the last thing that users want to see when copying over, say, 100 GB of data to the DAS unit, is the transfer rate going to USB 2.0 speeds. In order to identify whether the unit under test suffers from this problem, we instrumented our robocopy DAS benchmark suite to record the drive's read and write transfer rates while the robocopy process took place in the background. For supported drives, we also recorded the internal temperature of the drive during the process. The Netac Z5, unfortunately, doesn't support temperature read-out. The graph below show the speeds observed during our real-world DAS suite processing. The first three sets of writes and reads correspond to the photos suite. A small gap (for the transfer of the videos suite from the primary drive to the RAM drive) is followed by three sets for the next data set. Another small RAM-drive transfer gap is followed by three sets for the Blu-ray folder.

An important point to note here is that each of the first three blue and green areas correspond to 15.6 GB of writes and reads respectively. Throttling, if any, is apparent within the processing of the photos suite itself. 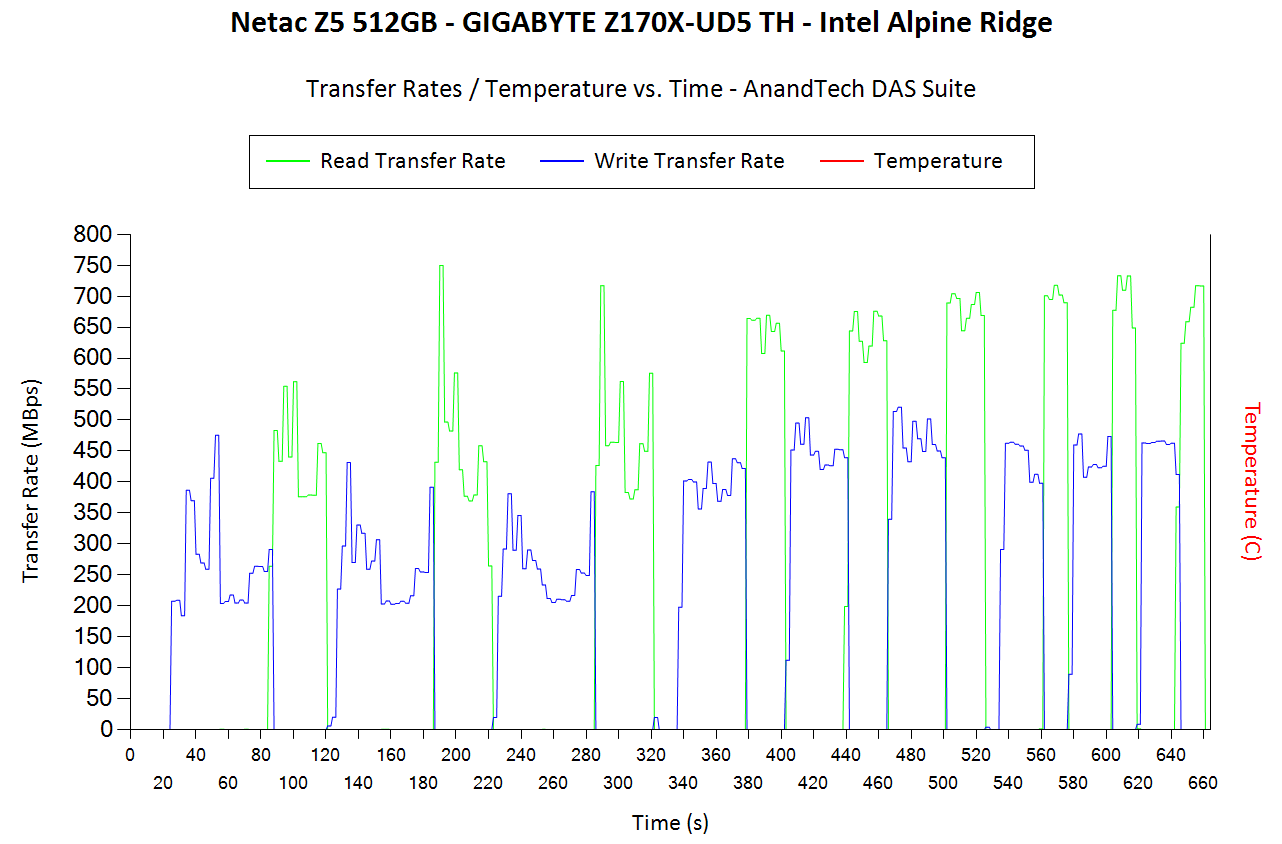 We do not see any performance consistency issues with the Netac Z5 at all.

The power consumed by the Netac Z5 512GB SSD was measured under multiple scenarios using Plugable's USBC-TKEY power delivery sniffer. These scenarios were triggered using CrystalDiskMark 5.1.2 x64 with a 8GB test file and each test separated by a 30s interval. The initial part of the graphs below show the idle power consumption of the drive. This is followed by the power consumed when CrystalDiskMark prepares the 8GB test file on the drive. The eight distinct segments that follow show the power consumption profile for the workloads (single-threaded sequential and random accesses with a queue depth of 32, followed by sequential and random accesses with a queue depth of 1). The first four segments correspond to read accesses and the last four to write accesses. 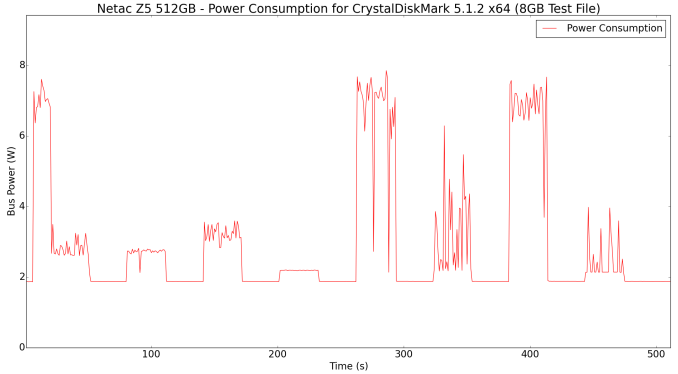 We also tracked the bus power consumption while processing the AnandTech DAS Suite (both the robocopy benchmarks as well as the PCMark 8 storage traces). 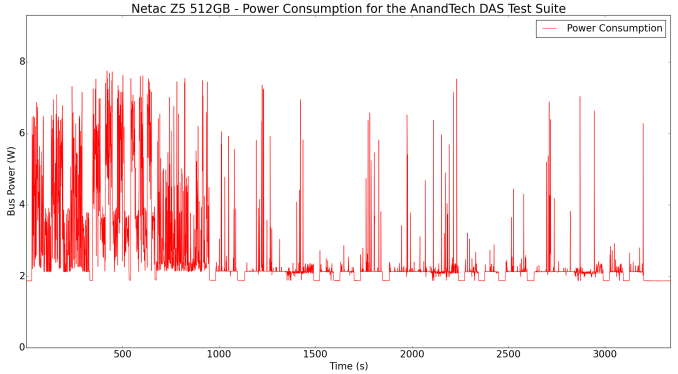 In this scenarion, the idling and peak power consumption numbers were observed to be 1.87W and 7.76 W respectively.

The absence of thermal throttling in the course of our DAS suite processing made us curious about the actual thermal behavior of the unit. Given that we had no way to track the internal SSDs' temperature, we opted to take thermal pictures of the exterior metal surface (using the FLIR One Thermal Imager for Android) after finishing the processing of our robocopy benchmarks (around the 1000s mark in the power consumption graph above). 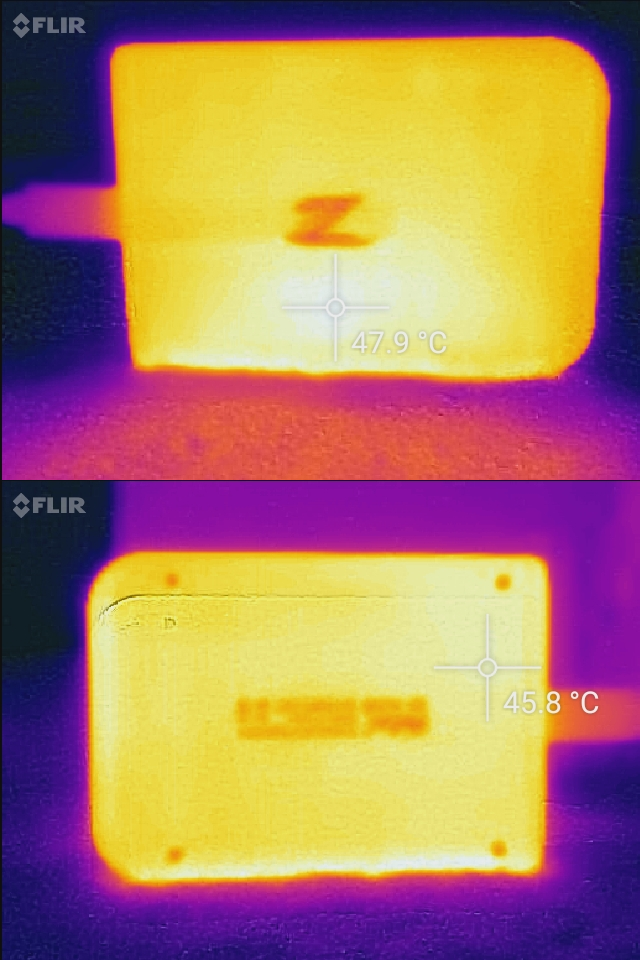 We recorded temperatures of approximately 48C and 46C on either side. It is not very dangerous, but one should definitely expect the metal surface to become quite warm after subjecting the SSD to strenuous traffic. 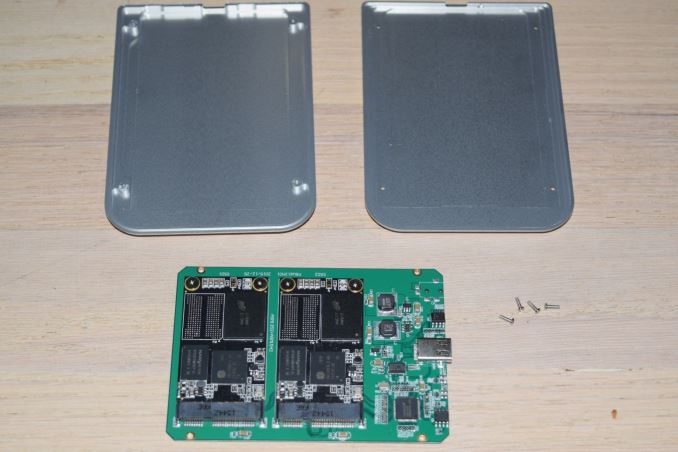 In terms of actual thermal design, we were quite surprised to find that neither the SSD controllers nor the flash packages had any sort of thermal pad to aid in transferring the generated heat to the metal body. This means that the metal surface takes some time to heat up, but, the controller and flash temperatures could become unreasonably warm in the meanwhile. That said, we don't see that being a problem for typical DAS workloads.