The Be Quiet! Silent Base 600 ATX Case Review

The Interior of the Be Quiet! Silent Base 600

The interior of the Silent Base 600 is sprayed with the same matte black paint as the exterior, making it also highly prone to fingermarks. However, the grommets that cover the cable management holes are colored depending on the version of the case. Since we received the orange version of the Silent Base 600, the grommets are orange. They are also made of quality silicone, making them significantly more durable than most such grommets that we have seen to this date. 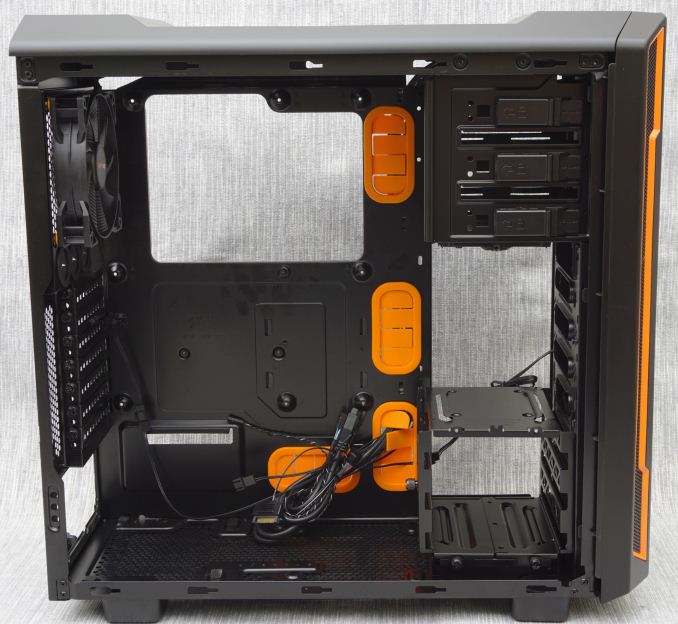 Four large openings for the cables covered by silicone grommets are present along the right side and the bottom of the motherboard. There are also small openings above the motherboard that are not covered by anything. These openings are very small due to the little clearance between the motherboard and the top of the case, with the EPS CPU power connector barely able to fit. 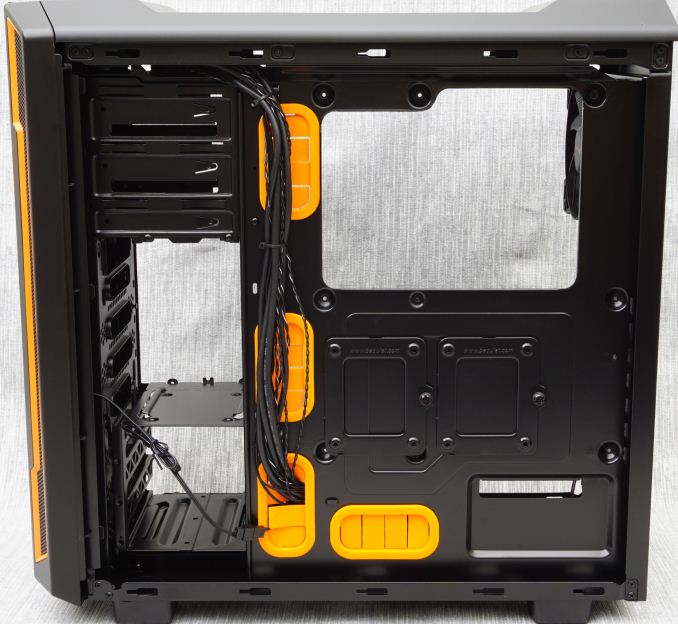 For cooling, Be Quiet! has two of their Pure Wings fans installed, one 140 mm at the front and one 120 mm at the rear of the case. They are both installed using decoupling silicone grommets to minimize noise and are attached to the case's fan controller. Even at their maximum speed these two fans can only go up to 900 RPM and 1200 RPM respectively, which is usually barely enough to reach audible noise levels.

Two small metallic trays can be found at the backside of the motherboard's tray. These trays are held in place with thumbscrews and each of them can hold one 2.5" drive. For reasons unknown, Be Quiet! engraved their website's URL on them. There is little else of interest on the back of the motherboard tray, with even the cable tie points limited to just a couple near the cable openings. The company is using simple cable ties to hold the cables, there are no cable ties installed and only very narrow cable ties would fit under the small tie points. 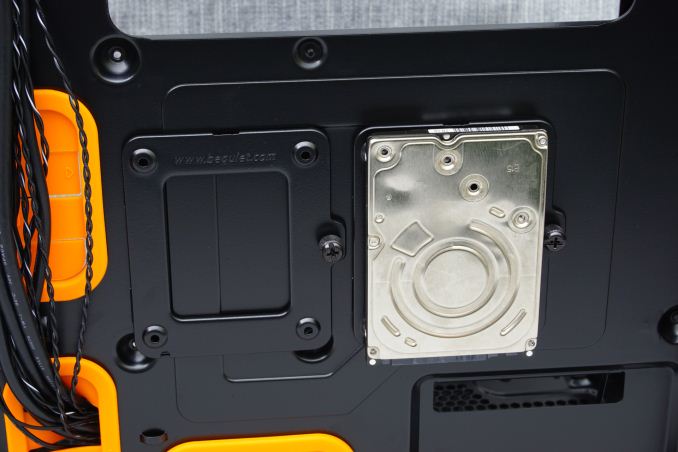 One front drive cage is installed in the Silent Base 600 by default, with room for one more. Assuming that it is convenient, the single drive cage can be installed beneath the 5.25" drives as well, leaving the lower front of the case unobstructed. It supports the installation of up to three 3.5" drives and one 2.5" drive. Be Quiet! devised the installation of 3.5" using silicone rails that effectively decouple the drive from the chassis, minimizing the transfer of vibrations and, therefore, noise. The 2.5" is secured using simple screws. 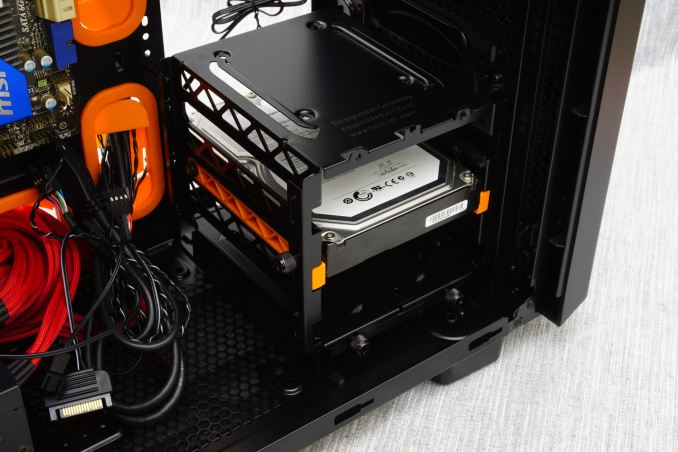 At this point, it is reasonable to assume that many of our readers would be worried about the longevity of the silicone rails, as their destruction would mean that no 3.5" drives can be installed. Silicone is virtually inert and does not react chemically with most substances, including anything that is present in typical atmospheric air. Even the lowest quality silicone has a lifetime in room temperature that is measured in decades. There is a good reason why silicone is the material of choice for cosmetic and medical body implants.

The PSU compartment is uncovered, with the PSU sitting on rubber cushions. The entire area beneath of the PSU is perforated, ensuring that the PSU's fan will draw air in easily, despite the PSU's length and the exact position of its intake fan. A metal support brace on top of the PSU helps keeping it in place, but these types of supports can very easily scratch the paint off a PSU, requiring extra care during the assembly of the system. 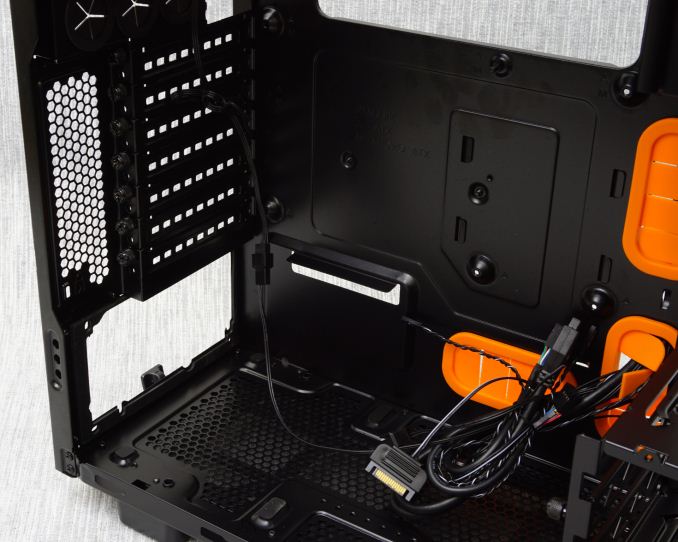 For the means of this review, we installed a Corsair AX760i with the red cable set, for strong visual contrast. The AX760i fits inside the Be Quiet! Silent Base 600 comfortably, revealing however that extra-long PSUs will partially block the bottom cable management hole. There is very little clearance between the PSU and the motherboard. The case is designed to have all of the PSU cables moving along the side of the motherboard, which can be a little tough when the PSU's cables are thick or too many cables are needed, but the large 21.5 mm clearance behind the motherboard's tray helps. The routing of the CPU EPS cable can be a small problem, as the 2.5" trays block it. In our case, the cable of our AX760i was barely long enough to reach the motherboard's header. 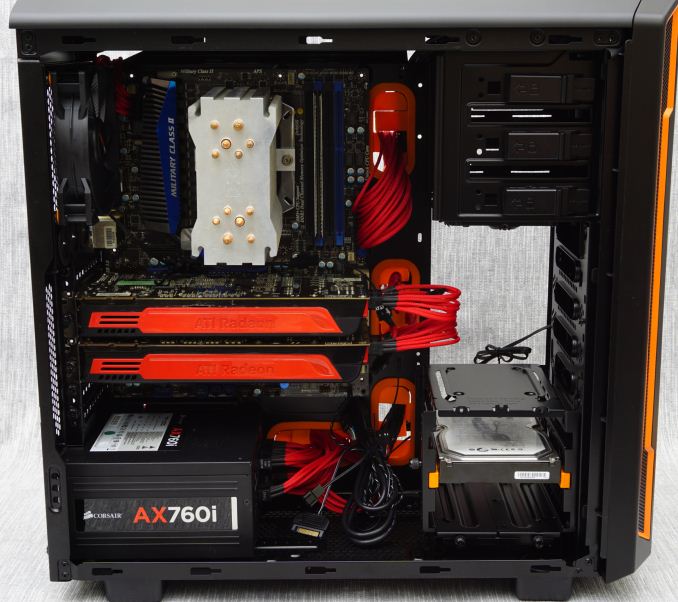 A standard ATX system fits well inside the system area of the Silent Base 600. Very long cards can be installed if there is no second 3.5" drive tray, but the routing of the cables will have to be done via the open area in front of the main system area. For a case this wide, the compatibility with CPU coolers up to 167 mm tall is not great, but it should suffice for the majority of the advanced air coolers currently available. Due to the little clearance between the motherboard and the top of the case only very few all-in-one liquid coolers with very narrow radiators will fit, and even then there might be compatibility problems. The design does offer the possibility to install a large external liquid cooler by placing holes at the rear of the case, but we feel that would beat the primary purpose of the Silent Base 600, which is to acoustically insulate the system installed in it. 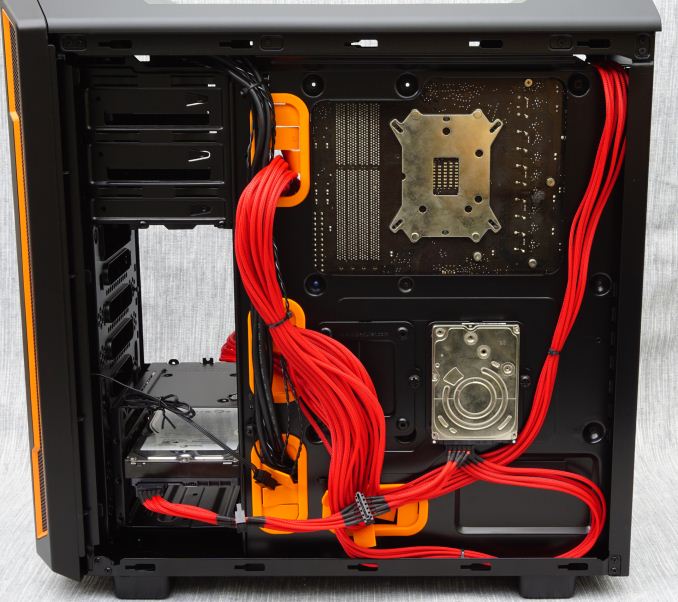 The Exterior of the Be Quiet! Silent Base 600 Testing & Results
Tweet
PRINT THIS ARTICLE
Comments Locked